A Map of the Alaska Railroad. 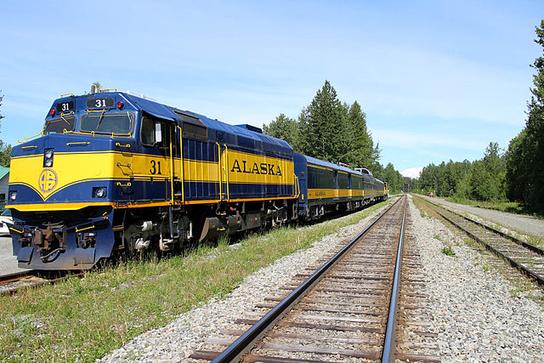 The Alaska Railroad
The Alaska Railroad (reporting mark ARR) is a Class II railroad which extends from Seward and Whittier, in the south of the state of Alaska, in the United States, to Fairbanks (passing through Anchorage), and beyond to Eielson Air Force Base and Fort Wainwright in the interior of that state. Uniquely (for the US), it carries both freight and passengers throughout its system, including Denali National Park. The railroad has a mainline over 470 miles (760 km) long and is well over 500 miles (800 km) including branch lines and siding tracks. It is currently owned by the state of Alaska. The railroad is connected to the contiguous 48 via three rail barges that sail between the Port of Whittier, Alaska and Harbor Island in Seattle (the Alaska Railroad-owned Alaska Rail Marine, from Whittier to Seattle, and the CN Rail-owned Aqua Train, from Whittier to Prince Rupert, British Columbia) but does not currently have a direct, land-based connection with any other railroad lines on the North American network. In 2013, the company earned a profit of $14.3 million (up 14%) on revenues of $175.1 million (down 1%), $165.6 million of which was operating revenue (down 2%).

History
In 1903 a company called the Alaska Central Railroad began to build a rail line beginning at Seward, near the southern tip of the Kenai Peninsula in Alaska, northward. The company built 51 miles (82 km) of track by 1909 and went into receivership. This route carried passengers, freight and mail to the upper Turnagain Arm. From there, goods were taken by boat at high tide, and by dog team or pack train to Eklutna and the Matanuska-Susitna Valley. In 1909, another company, the Alaska Northern Railroad Company, bought the rail line and extended it another 21 miles (34 km) northward. From the new end, goods were floated down the Turnagain Arm in small boats. The Alaska Northern Railroad went into receivership in 1914.

About this time, the United States government was planning a railroad route from Seward to the interior town of Fairbanks. The President, William Howard Taft, authorized a commission to survey a route in 1912. The line would be more than 470 miles (760 km) long and provide an all-weather route to the interior. In 1914, the government bought the Alaska Northern Railroad and moved its headquarters to "Ship Creek," later called Anchorage. The government began to extend the rail line northward.

In 1917, the Tanana Valley Railroad in Fairbanks was heading into bankruptcy. It owned a small 45-mile (72 km) 3 ft (914 mm) (narrow gauge) line that serviced the towns of Fairbanks and the mining communities in the area as well as the boat docks on the Tanana River near Fairbanks.

The government bought the Tanana Valley Railroad, principally for its terminal facilities. The section between Fairbanks and Happy was converted to dual gauge in order to complete the 4 ft 8 1⁄2 in (1,435 mm) standard gauge line from Seward to Fairbanks. The government extended the south portion of the track to Nenana and later converted the extension to standard gauge. The Alaska Railroad continued to operate the remaining TVRR narrow gauge line as the Chatanika Branch, until decommissioning it in 1930.

In 1923 they built the 700-foot (213 m) Mears Memorial Bridge across the Tanana River at Nenana. This was the final link in the Alaska Railroad and at the time, was the second longest single-span steel railroad bridge in the country. U. S. President Warren G. Harding drove the golden spike that completed the railroad on July 15, 1923, on the north side of the bridge. The railroad was part of the US Department of the Interior.

The railroad was greatly affected by the Good Friday earthquake which struck southern Alaska in 1964. The yard and trackage around Seward buckled and the trackage along Turnagain Arm was damaged by floodwaters and landslides. It took several months to restore full service along the line.

In 1967, the railroad was transferred to the Federal Railroad Administration, an agency within the newly created US Department of Transportation.

In 1985, the state of Alaska bought the railroad from the U.S. government for $22.3 million, based on a valuation determined by the US Railway Association. The state immediately invested over $70 million on improvements and repairs that made up for years of deferred maintenance. The purchase agreement prohibits the Alaska Railroad from paying dividends or otherwise returning capital to the state of Alaska (unlike the other Alaska quasi-entities: Alaska Permanent Fund Corporation, Alaska Housing Finance Corporation (AHFC), and Alaska Industrial Development and Export Authority (AIDEA).

Proposed expansion in Alaska
Northern Rail Extension to Delta Junction
As of April 2010, an extension of the railroad from Fairbanks to Delta Junction is planned, having been proposed as early as 2009.[citation needed] Originally, the extension was to be completed by 2010,[8] but construction of a major bridge across the Tanana River has barely begun, and construction of track has not started. A proposed 2011 Alaska state budget would provide $40 million in funding for the bridge, which would initially be for vehicular use, but would support Alaska Railroad trains once construction of track to Delta Junction began. The United States Department of Defense would provide another $100 million in funds, as the bridge and subsequent rail line would provide year-round access to Fort Greely and the Joint Tanana Training Complex. A groundbreaking ceremony for the Tanana River Bridge took place on September 28, 2011.

Point MacKenzie Line
On 21 November 2011, the Surface Transportation Board approved the construction of a new 25 miles (40 km) line between Port MacKenzie and the existing mainline at Houston, Alaska.

Anchorage Commuter Rail Service
There are plans to provide commuter rail service within the Anchorage metropolitan area (Anchorage to Mat-Su Valley via Eagle River, north Anchorage to south Anchorage) but that requires additional tracks be laid due to a heavy freight schedule.

A spur line was built to Ted Stevens International Airport in 2003, along with a depot at the airport, but the line never received scheduled service. It is not open to the public, but cruise lines can charter trains to the airport to bring passengers to cruise ships. The Alaska Railroad currently leases the airport depot, officially named after Bill Sheffield, to citizens for private events including conferences, seminars, and corporate functions.

Proposed connection to the contiguous 48 states
The United States government in 2001 legislation sponsored by Alaskan Senator Frank Murkowski (later Alaskan Governor), formed a bilateral commission to study feasibility of building a rail link between Canada and Alaska; Canada was asked to be part of the commission, but the Canadian federal government did not choose to join the commission and commit funds for the study. The provincial Yukonian government showed some interest.

A June 2006 report by the commission has recommended Carmacks, Yukon, as a hub. A line would go northward to Delta Junction, Alaska (Alaska Railroad's northern end-of-track). Another line would go from Carmacks to Hazelton, British Columbia (which is served by the CN), and that line would go through Watson Lake, Yukon, and Dease Lake, British Columbia, along the way. The third line would go from Carmacks to either Haines or Skagway, Alaska (the latter by way of the vicinity of Whitehorse, Yukon, which are both served by the 3 ft (914 mm) (narrow-gauge) White Pass and Yukon Route Railroad), although today the White Pass & Yukon only goes as far north as Carcross, Yukon, because the entire line was embargoed in 1982 and service has not been completely restored.

Following the demise of the ill-fated Keystone Pipeline, the Alaska Canada Rail Link (ACRL) was rekindled as an alternative. In November 2015, the National Post reported that a link between the southern provinces and the Alaska Railroad was again being considered by the Canadian federal government, this time routing to Alberta. In this scenario, the route would originate at Delta Junction, Alaska and use Carmacks, Yukon as a hub, like prior plans. The route would continue through Watson Lake, Yukon before entering British Columbia, where it would stop at Fort Nelson, British Columbia. It would continue to Peace River, Alberta, with its southern terminus at Fort McMurray. The route is endorsed by the Assembly of First Nations. It is unclear whether this rail connection would ever be expanded to also serve passengers, like the Alaska Railroad.

Routes and tourism
The railroad is a major tourist attraction in the summer. Coach cars feature wide windows and domes. Private cars owned by the major cruise companies are towed behind the Alaska Railroad's own cars, and trips are included with various cruise packages.

Routes
The Denali Star runs from Anchorage to Fairbanks (approximately 12 hours one-way) and back with stops in Talkeetna and Denali National Park, from which various flight and bus tours are available. The Denali Star only operates between May 15 and September 15. Although the trip is only about 356 miles (573 km), it takes 12 hours to travel from Anchorage to Fairbanks as the tracks wind through mountains and valleys; the train's top speed is 59 miles per hour (95 km/h) but sometimes hovers closer to 30 miles per hour (48 km/h).

The Aurora Winter Train is available in winter months (September 15 - May 15) on a reduced weekend-only schedule (Northbound, Saturday mornings; Southbound, Sunday mornings) between Anchorage and Fairbanks on the same route as the Denali Star.

The Coastal Classic winds its way south from Anchorage along Turnagain Arm before turning south to the Kenai Peninsula, eventually reaching Seward. This 114-mile (183 km) trip takes around four and a half hours due to some slow trackage as the line winds its way over mountains.

The Glacier Discovery provides a short (2 hour) trip south from Anchorage to Whittier for a brief stop before reversing direction for a stop at Grandview before returning to Anchorage in the evening.

The Hurricane Turn provides rail service to people living between Talkeetna and the Hurricane area. This area has no roads, and the railroad provides the lifeline for residents who depend on the service to obtain food and supplies. One of the last flag-stop railway routes in the United States, passengers can board the Hurricane Turn anywhere along the route by waving a large white flag or cloth.

A spur providing service to the Ted Stevens Anchorage International Airport is used during the summer season for cruise ship service only. It was activated temporarily during the Alaska Federation of Natives (AFN) 2006 convention to provide airport-to-hotel mass transit for delegates.

A type "2-8-0 Consolidation" engine built in 1944 by Baldwin Locomotive Works, 557 was originally coal-fired, but was converted to oil in 1955. It operated until 1964, when it was deemed surplus and sold as scrap. It was purchased by Monte Holm of Moses Lake, Washington and displayed in his House of Poverty Museum.

After Holm's death in 2006, Jim and Vic Jansen bought 557 from the museum and returned it to the Alaska Railroad on the condition that it be restored to operation and put into service.

The locomotive was sold to the non-profit Engine 557 Restoration Company for "One Dollar ($1.00) and other good and valuable considerations" and they have invested (as of January, 2015) 30 months and over 15,000 hours of volunteer time in the restoration and overhaul.

In popular culture
The Alaska Railroad was prominently featured in the movie Runaway Train.
The Simpson family rides the Alaska Railroad in The Simpsons Movie, although the colors and configuration of cars and engines are inaccurate. They also ride the train from Alaska to Seattle, Wash. which is not possible as there is no railroad link from Alaska to Canada and the southern 48 states.
The railroad is mentioned in the 1995 film Balto.
The railroad is briefly seen in the opening of the 2007 film Into the Wild.
The Railroad is the subject of a 2013 reality TV series named Railroad Alaska on Destination America. 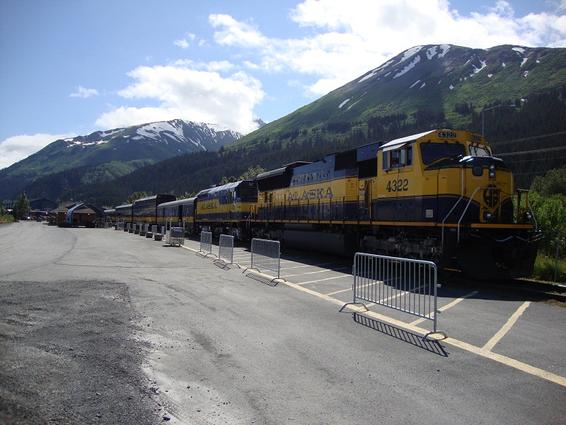 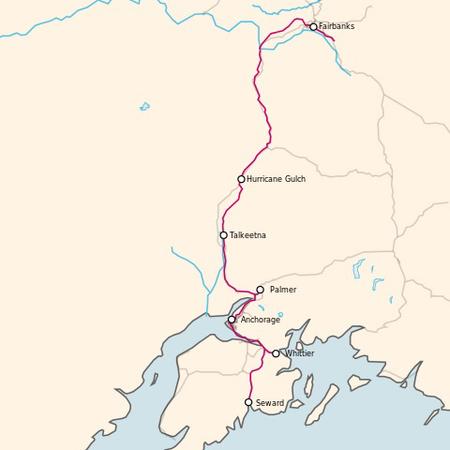