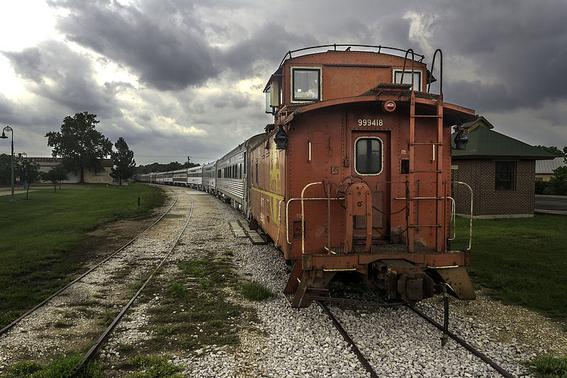 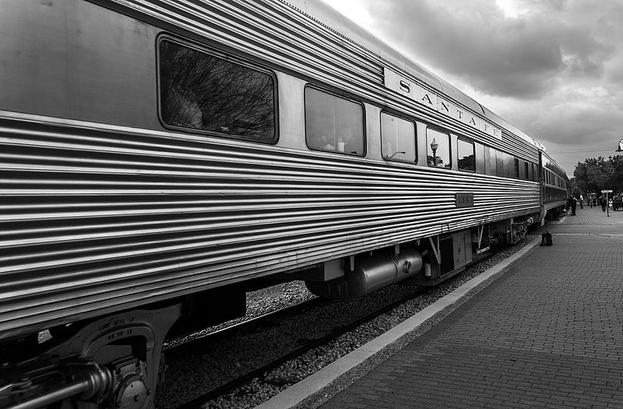 History
The ASTA was created when a historic steam locomotive and historic rail line both became the property of the citizens of Austin, Texas. Southern Pacific (SP) locomotive No. 786 had been donated to the city of Austin in 1956 and was placed on static display in Brush Square, located in downtown Austin. Twenty years later in 1976, the SP ceased operations in the Austin area and sold the city 167 miles of trackage from Giddings through Austin to Burnet, Llano and Marble Falls. A group of local railfans, led by businessman and private-railcar enthusiast Arthur U. Boone, incorporated the non-profit Austin Steam Train Association in 1989. Vintage passenger cars were then acquired, and the “Hill Country Flyer” made its first run on July 25, 1992. It was the first passenger train to run between Cedar Park and Burnet, Texas in 55 years.

The ASTA moved into a 16-acre rail yard in Cedar Park in 1993. The yard was donated by Texas Commerce Bank and developed with a grant from the State of Texas. More recently, part of the yard was subdivided for a retail development and the association was able to build new boarding facilities for passengers. It also moved its administrative headquarters to Cedar Park as well. Weekend passenger operations have continued uninterrupted since that first train ran in 1992.

Operating crews are volunteers, each fully trained and qualified. In addition to running the trains, these volunteers take care of equipment maintenance, restoration, and track-laying duties. Volunteers have also restored a historic 1912 country depot in Bertram, which was re-opened in 1997.

SP No. 786 is a 2-8-2 Mikado-type steam locomotive that was built in 1916. It was restored to operating condition in a privately financed effort that took two years. After 60,000 miles and seven years of service, No. 786 was sidelined in 1999 for repairs. This turned into a complete overhaul, which is still ongoing. Passenger operations were not interrupted as borrowed diesel-electric locomotives were pressed into service. The ASTA then acquired its own diesel-electric locomotive, Alco RSD-15 No. 442. It had been built for the Santa Fe Railway in 1960 (ATSF No. 842). The Alco powered almost all ASTA trains from 1999 through 2016. It is presently undergoing restoration. Horizon Rail (HZRX) No. 3134 is the current locomotive in use, temporarily replacing No. 442 while it is being restored. No. 3134 is an EMD GP40-3 that was rebuilt in 2016 after an alternator fire spread throughout the electrical locker and cab. This locomotive has been leased from Horizon Rail.

Cedar Park was formerly Santa Fe No. 3163, a 52-seat stainless steel passenger coach built by Budd in 1946. This car was originally used between San Diego and Los Angeles, California. The ASTA acquired this car in 2013 and renamed it Cedar Park. It has served as a concession car since May of 2018.

Buckeye Lake was built in 1949 for the Delaware, Lackawanna and Western Railroad and originally operated on daily trains between New York and Buffalo. It is an excursion class coach car with heating and air conditioning and seats two passengers on either side of the aisle. It also features a unisex bathroom.

Buckeye Trail was built for the New York, Chicago and St. Louis (Nickel Plate) Railroad. It is a coach car with heating and air conditioning and seats two passengers on either side of the aisle. The Buckeye Trail has a unisex bathroom in the car.

New Braunfels is one of six cars ordered in late 1954 in Pullman Lot 6965 to Plan 7647 for the famous streamlined Texas Special. It was one of the first all-stainless steel cars built by Pullman-Standard, which had been unable to build all-stainless steel cars until the mid-1950s when certain patents held by rival Budd Co. expired. One car in the series was built for the Frisco.  The other five, including the New Braunfels, were delivered in July 1955 to the Missouri-Kansas-Texas Railroad (MKT or Katy), operating between St. Louis and San Antonio. After cessation of the Katy’s passenger service in the 1960s, the New Braunfels went to the Northern Pacific Railway (NP) as No. 530, and after NP was merged with other lines to form Burlington Northern (BN), the car became BN property.  AMTRAK acquired the car from BN in 1971 it was renumbered 6452.  In the early 1980s, the New Braunfels was leased to Metro North Commuter Railroad, seeing service on various commuter lines out of New York City.  In July 1985, AMTRAK offered the New Braunfels for sale at auction, and it was purchased by the Gulf Coast Chapter of the National Railway Historical Society for use by the Texas Railroading Heritage Museum. The New Braunfels made its way to the ASTA yard in 2016 and is currently being leased by the National Railway Historical Society.

Silver Pine (DRGW No. 1121) was built for the Denver and Rio Grande Western in 1948 by the Budd Company. This car was part of a fleet of cars that was used in service on the California Zephyr, a joint venture between the Denver Rio Grande Western, Burlington Route, and Western Pacific railroads. The car was originally constructed as a 16 section sleeper, but in 1964 was rebuilt into a 48 seat coach. The California Zephyr ceased operation in 1970 and the route was taken over by Amtrak in 1971. The DRGW however opted not to be a part of Amtrak and continued to operate its part of the former California Zephyr as the Rio Grande Zephyr between Denver and Ogden. The Silver Pine remained in service on the Rio Grande Zephyr until it too was discontinued in 1984. The Silver Pine was sold to a private owner and kept in storage until ASTA purchased the car in 2010. It was returned to service in 2011 as a first class coach car. The car has a center-aisle with 2 seats on each side of the aisle. The Silver Pine has both a men’s and a women’s restroom in the car and is climate controlled.

Maurice Beckham originally housed a barbershop, shower, passenger lounge and crew dormitory on the Santa Fe’s famous Super Chief train, which operated between Chicago and Los Angeles. It was built by Pullman-Standard in November 1950 as one of six identical cars. The 1343 later became part of Amtrak’s fleet during the 1970's, and was purchased by Charles and Lowell Turner in 1982. Today the car contains an open lounge area and kitchen for serving snacks. It also has a popular party room for up to 8 passengers with 3 small tables and 8 chairs with 3 windows on one side and 2 doors on the other. The car is fully climate controlled. In 2015, the Santa Fe 1343 was re-named the Maurice Beckham in honor of it’s long time volunteer. Maurice Beckham’s 21 years of generous service on the Austin & Texas Central Railroad was unmatched. Accordingly, at the behest of his fellow onboard-service crew members, the ASTA Executive Committee unanimously voted to name the Santa Fe dormitory-lounge car 1343 for Maurice, as a lasting reminder of the high standard he has set in his many years of service to the railroad and devotion to their passengers.

Eagle Cliff was used on Missouri Pacific and Texas & Pacific streamline service trains Nos. 1 and 2, the Texas Eagle, between St. Louis and Ft. Worth. The Eagle Cliff was built in 1948 by Pullman-Standard and is an excellent example of “smooth side” aluminum design. The Eagle Cliff is an 85 foot Sleeper-Lounge (the sole survivor of three such cars). The interior is consists of five compartments, each with windows on one side and doors on the other, and seats for 26 in the lounge area. The two original large illuminated photographic murals in the lounge represent points of interest along the Missouri Pacific line. After retirement from the Missouri Pacific in 1966, the Eagle Cliff was purchased by A.C. Schwethelm to entertain visitors at his business. It was purchased in 1975 by Bert Dockall of Rockdale, Texas and James Vaughan of Liberty Hill, Texas and restored between 1977 and 1979 in Cameron, Texas. The car is owned by Eagle Rail Services and leased to the Austin and Texas Central Railroad. The Eagle Cliff is fully climate controlled. The Eagle Cliff continues on her journey in memory of Bert Dockall and James Vaughan.

Rippling Stream was built by the Budd Company for the New York Central System in 1949. It was part of a multi-car order under lot 9663-023. The Rippling Stream has 10 sisters: Forest Stream, Gulf Stream, Rapid Stream, Boulder Stream, Crystal Stream, Woodland Stream, Swift Stream, Mountain Stream, and Rainbow Stream. It was common to give cars the same last name and have a theme in a multi-car order. The Rippling Stream was in the consists of the Ohio State Limited, the Chigagoan, and the Pacemaker, all classic trains of New York Central’s Great Steel Fleet. The original car number was 10623 and was re-numbered to 3209 by Amtrak in 1974, and finally found it’s home at ASTA. The Rippling Stream boasts a 22 seat open lounge and 5 compartments. Compartments F and C will each seat 2 people with vintage Amtrak lounge chairs and a round table. Compartments E and D will each seat 4 people in standard chairs and a square table. Compartment AB is one large room that seats 8 people at two tables of four with tall back, padded chairs. Each compartment is separated. It also has a bar and prep area between the bedrooms and the lounge for snack service. The Rippling Stream is currently out of the consist while undergoing a wheel repair and is expected to return soon.

Nambe is a rare example of the streamlined stainless steel passenger cars manufactured by the Budd Company in 1937 for the Atchison Topeka & Santa Fe railroad. The car initially served on the Super Chief line between Chicago and Los Angeles, and after World War II, operated on various lines, including the Texas Chief between Galveston and Chicago. Originally one of the eight-car 1370 series, it is only one of two in existence, and the only one with its interior features and finishes intact. The car exemplifies streamlined design of the 1930's, both on the exterior and the interior. Inside the heated and cooled adults only First Class Lounge are tables and chairs to seat up to 32 people in the main lounge, along with a 12 person private compartment that offers seating at three tables for four. The private compartment has windows on one side of the room, and on the other side has doors for privacy.

The ASTA opened an American railroad history museum at their Cedar Park office in April of 2015. The Museum is open Tuesday-Friday from 9am-4pm. Passengers can also visit the museum an hour prior to each train departure on the weekends.