AVR acts as a feeder line connecting its many and varied customers to Class I railroads such as CSX Transportation (CSX) and Norfolk Southern Railway (NS), and regional lines such as the Buffalo and Pittsburgh Railroad (B&P) and the modern  Wheeling and Lake Erie Railway (WE). The AVR's mainline travels northward through Pittsburgh from an intersection with Norfolk Southern near Panther Hollow, before splitting in the Lawrenceville neighborhood. The AVR uses the P&W Subdivision segment of the line to cross the Allegheny River on the 33rd Street Railroad Bridge to interchange with the B&P in Bakerstown and/or Evans City. The other segment serves industries along the railroad's namesake valley between Pittsburgh and Arnold. The Glenwood B&O Railroad Bridge is utilized by it as part of its W&P Subdivision branchline from the city to the exurb of Washington, Pennsylvania. A short spur line is the newest addition to the AVR's portfolio; it links the Allegheny Valley line with Sharpsburg via the Brilliant Branch Railroad Bridge. Before this section opened in 2003, the bridge and stretch of track had sat unused since 1976.

Currently, the AVR leases the Glenwood railyard from CSX in the Hazelwood neighborhood of Pittsburgh. They operate five GP11 locomotivess, and three SD40's. AVR has also begun to conduct transloading operations within Glenwood yard itself, handling limestone unit trains and also sand for fracking.

History
The current company, established in 1992 is a separate entity from the original Allegheny Valley Railroad, which was established in the 1850s. That line, affiliated with the Pennsylvania Railroad system, followed the present company's tracks to Arnold and continued beyond, along the right upstream (southeastern) bank of the river to Oil City. 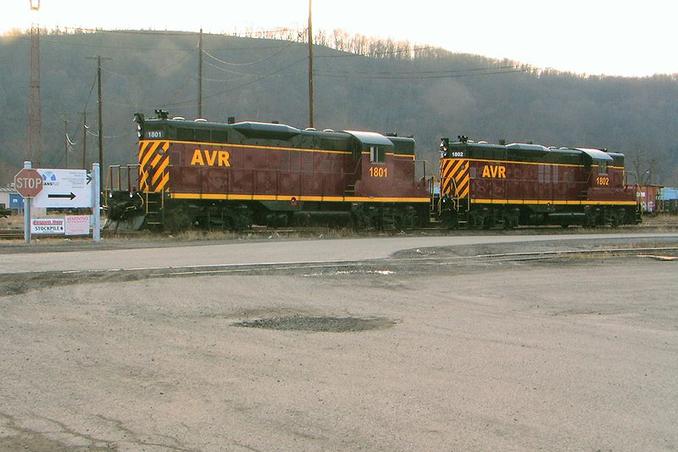