History
What is now the Arizona Eastern Railway was chartered as the Gila Valley, Globe and Northern Railway (GVGN) in 1885. Before completion to Globe in 1899, the GVGN came under the control of the Arizona Eastern Railroad (AE). The Arizona Eastern was leased by the Southern Pacific Railroad (SP) in 1905 and merged into the SP system in 1924. SP sold the Bowie – Miami line to Kyle Railroad in 1988. Kyle was purchased by shortline holding company StatesRail in 1995, which was eventually purchased by RailAmerica in 2001. RailAmerica sold the railroad to Permian Basin Railways on December 9, 2004.

Of historical note, the Gila Valley Globe & Northern Railroad's first locomotive, apparently GVGN No. 1, was purchased from the Central Pacific Railroad, originally No. 1195 (Jupiter). The locomotive was the Central Pacific locomotive that met with Union Pacific No. 119 at Promontory Summit on May 10, 1869 for the driving of the golden spike, commemorating the completion of the First Transcontinental Railroad. Despite its historical significance, in 1909 the GVGN, by then controlled by Central Pacific successor Southern Pacific, sold No. 1 for $1000 as scrap.

In 2006, Arizona Eastern announced the construction of a new 10-mile (16 km) spur from Safford to the new Safford Mine of Freeport-McMoRan Corporation, north of Safford. The mine opened in 2008.

In 2008, AZER purchased the Clifton Subdivision from Union Pacific. The Clifton subdivision serves the Morenci Mine near Clifton, Arizona and interchanges with UP at Lordsburg, New Mexico.

In December 2008, weekend excursion service under the name Copper Spike began operating from Globe to the Apache Gold Hotel Casino near San Carlos. Trains operate four daily round-trips through the winter and spring, on Thursdays through Sundays.

On 2 August 2011, Genesee & Wyoming Inc. announced that it planned to purchase the Arizona Eastern from Iowa Pacific for US $90.1 million, with the deal expected to be completed by the end of the year.[6] The deal was closed on 1 September 2011.

The Copper Spike excursion train did not resume operation for a 2011-2012 season due to the transfer in ownership.

Arizona Eastern previously operated AZER No. 6070, an EMD E8 locomotive. Built for the Chicago and North Western Railroad as CNW No. 5029B on June 1953, it pulled passenger trains for its railroad including Chicago commuter train service. It was repainted in a scheme reminiscent of Southern Pacific's "Black Widow" livery, since Arizona Eastern was owned by Southern Pacific. As of August 2011, the locomotive was transferred to the Saratoga and North Creek Railroad.

Arizona Eastern No. 3, a Heisler locomotive in AZER's railyard in Miami, Arizona. 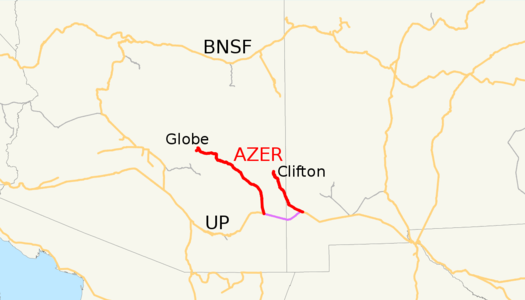 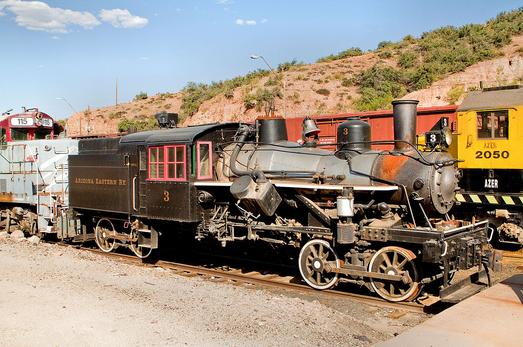 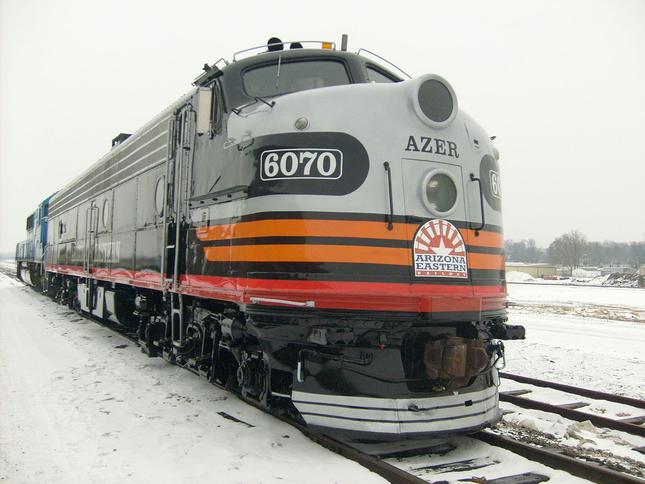 A map of the Arizona Eastern Railway as of 2009, with trackage rights in purple and other railroads in gray (Class I railroads in orange).

An EMD E8 in "Black Widow" livery. The locomotive was used on the Copper Spike train in 2010.