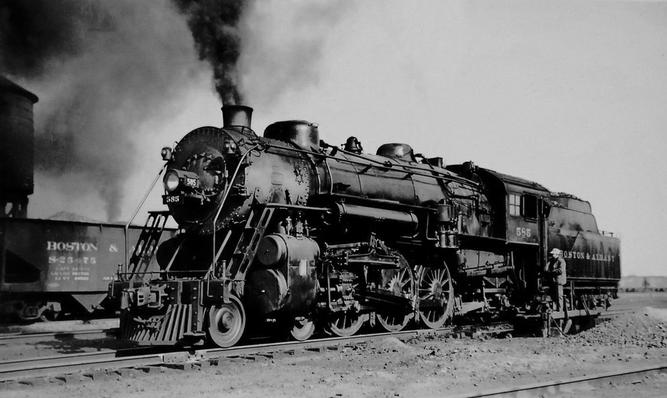 Boston and Albany Railroad
The Boston and Albany Railroad (reporting mark B&A) was a railroad connecting Boston, Massachusetts to Albany, New York, later becoming part of the New York Central Railroad system, Conrail, and CSX Transportation. The line is currently used by CSX for freight. Passenger service is still operated on the line by Amtrak (as part of their Lake Shore Limited service), and by the MBTA Commuter Rail system, which owns and uses the section east of Worcester as their  Framingham/Worcester Line.

History
The Boston and Worcester Railroad was chartered June 23, 1831 and construction began in August 1832. The line opened in sections: to West Newton on April 16, 1834; to Wellesley on July 3; to Ashland on September 20; to Westborough in November 1834; and the full length to Worcester on July 4, 1835. The originally single-track line was doubled-tracked from Boston to Framingham in 1839, and on to Worcester by 1843. In 1843 the B&W introduced season passes to West Newton for $60, effectively introducing the concept of commuter rail.

The Western Railroad was chartered February 15, 1833 and incorporated March 15, 1833 to connect the B&W to the Hudson and Berkshire Railroad at the New York state line. Construction began in 1837, and the Eastern Division to the  Connecticut River in Springfield opened on October 1, 1839. The Western Division, through the Berkshire Hills, opened in sections from both ends from the state line to Pittsfield May 4, 1841, West Springfield to Chester May 24, 1841, Springfield to West Springfield (across the Connecticut River) July 4, 1841, Pittsfield to "Summit" August 9, 1841, and Chester to Summit September 13, 1841. On October 4, 1841 the first train ran along the full route.

The Castleton and West Stockbridge Railroad was incorporated in New York in 1834 as the New York part of the Western Railroad, and changed its name to the Albany and West Stockbridge Railroad (chartered May 5, 1836, organized May 20). Construction began in December 1840 and the line opened from Greenbush (east of Albany) to Chatham on December 21, 1841 and to the Massachusetts state line on September 12, 1842. It was leased to the Western Railroad for 50 years from November 11, 1841. This railroad replaced the Hudson and Berkshire Railroad east of Chatham, which was abandoned around 1860.

Two mergers, on September 4, 1867 and December 28, 1870 brought the three companies, along with the Hudson and Boston Railroad, together into one company, known as the Boston and Albany Railroad. The New York Central and Hudson River Railroad leased the B&A for 99 years from July 1, 1900. This lease passed to the New York Central Railroad in 1914; throughout this, the B&A kept its own branding in the public eye. The NYC merged into Penn Central on February 1, 1968.

In 1883, the B&A acquired track then owned by the New York and New England Railroad as far as Newton Highlands, and, in 1884, began the construction of a line northwest to the B&A mainline, creating a commuter loop. "The Circuit," as this route was called, officially opened in May 1886, providing double-track operation from downtown Boston through Brookline to Newton Highlands, then north into Riverside, and four tracks on the mainline from Riverside back to downtown so that commuter and mainline operations did not conflict. By 1889, as many as 35 trains traveled the Circuit daily, providing commuter service.

In 1899, the new South Station union station opened in Boston, a few blocks northeast of the old terminal. That terminal had been located on the west side of Utica Street (Boston, from Kneeland Street south to Harvard Street, now part of the South Bay Interchange. Even earlier, the terminal was in the block bounded by Kneeland Street, Beach Street, Albany Street (now Surface Artery), and Lincoln Street.

By the early part of the 20th century, commuter rail service was provided east of Worcester, with intercity rail continuing on west. The intercity trips were taken over by Amtrak on May 1, 1971, and, on January 27, 1973, the MBTA acquired the line east of Framingham. Service beyond Framingham was discontinued October 27, 1975, as the state did not subsidize it. Conrail took over Penn Central on April 1, 1976. On September 26, 1994, some rush hour trains started to serve Worcester on Conrail trackage (which became CSX trackage on June 1, 1999), extending to other times beginning on December 14, 1996. The MBTA acquired the rest of the line from Framingham to Worcester as part of an agreement announced in 2009. As part of the deal, clearances on the line west of Interstate 495 will be improved, permitting full double stack service from Selkirk Yard in New York to an expanded CSX intermodal freight facility in Worcester and a transload facility near I-495. The deal was closed on June 17, 2010. CSX's Boston Subdivision retains the right to use certain MBTA-owned track.

Since 1959, the former "Circuit" line, later called the Highland Branch, has been used as the grade-separated right-of-way of the MBTA's Green Line "D" Branch light rail line.

Named trains
The Boston & Albany hosted many named long-distance trains of the New York Central system. Below is a list of named trains effective as of November 12, 1939.

The Mohawk, Boston-Albany-Buffalo-Cleveland-Chicago with connection at Cleveland for Indianapolis and St. Louis

South Shore Express, Boston-Albany-Buffalo-Cleveland-Chicago with connection to Chicago via Detroit at Buffalo and to Cincinnati, Indianapolis, and St. Louis at Cleveland

Branches
Grand Junction
The Grand Junction Railroad was chartered in 1847 as a reincorporation of the 1846 Chelsea Branch Railroad, meant to connect the lines north and west of Boston. The first section, from East Boston to Somerville, opened in 1849, and the extension to the B&W in Allston opened in 1856. The Eastern Railroad leased the line from 1852 to 1866, using part of it as their new main line. In 1866 the B&W bought the line (keeping trackage rights for the Eastern).

Brookline/Highland
The Brookline Branch split from the main line in the west part of Boston's Back Bay, running southwest for 1.55 mi (2.5 km) to Brookline (the current location of Brookline Village station). It opened in 1847. In Summer 1852 the Charles River Branch Railroad extended the line to Newton Upper Falls; this would eventually become part of the New England Railroad, an alternate route to New York.

In 1882 the B&A bought part of the Charles River Branch, and in 1884 they built a line from Riverside to the branch, forming the Highland Branch, Newton Highlands Branch or "Newton Circuit". Service ended in 1958, and the MBTA Green Line "D" Branch light railline started using the tracks in 1959.

Saxonville
The Saxonville Branch opened in 1846, running 3.87 miles (6.2 km) from Natick to Saxonville.

Milford
In 1847, the 11.97 mile (19.3 km) Milford Branch, splitting at Framingham, opened. A connection was later made at Milford to the Milford and Woonsocket Railroad and Hopkinton Railway.

Millbury
The 3.07 mile (4.9 km) Millbury Branch opened in 1846 from a split at Millbury Junction on the Grafton/Millbury line to Millbury.

Webster
The Providence, Webster and Springfield Railroad was chartered in 1882, opened in 1884, and always leased to and operated by the B&A. The line formed a branch of the B&A from Webster Junction in Auburn to the Worcester and Norwich Railroad in Webster, with a short branch (East Village Branch) in Webster to East Village.

Spencer
The Spencer Railroad opened and was leased to the B&A in 1879, as a short branch from South Spencer to Spencer. The B&A outright bought it in 1889.

Ware River
The Ware River Railroad was chartered in 1868, running from Palmer to the Cheshire Railroad in Winchendon. The first section, from Palmer to Gilbertville, opened in 1870, and the rest in 1873. Until 1873 it was leased to and operated by the New London Northern Railroad; at that time the lease was transferred to the B&A, as a reorganization of the earlier company.

North Adams
The Pittsfield and North Adams Railroad was incorporated in 1842 and opened in 1846, having been already leased to the Western Railroad. It ran from North Adams Junction in Pittsfield to North Adams, where it connected to the Troy and Greenfield Railroad. Surviving structures along this branch include the Pittsfield & North Adams Passenger Station and Baggage & Express House in Adams, Massachusetts. Most of this line has been turned into the Ashuwillticook Rail Trail.

Hudson
The Hudson and Berkshire Railroad was chartered in 1828 to build a line from Hudson, New York to the Massachusetts state line. Construction began in 1835 and was completed in 1838. The company was leased to the Berkshire Railroad, along with the connecting West Stockbridge Railroad, in 1844, but was bought by the Western Railroad in 1854. The name was changed to the Hudson and Boston Railroad in 1855, and the part east of Chatham was abandoned around 1860, as it was redundant with the newer Albany and West Stockbridge Railroad (part of the B&A main line). The rest of the line formed a cutoff between the New York Central and Hudson River Railroad towards New York City and the B&A.

Post Road/Selkirk
The Post Road Branch or Selkirk Branch was originally built as part of the Hudson River Connecting Railroad, a southern bypass of the Albany area. It opened in 1924, and the part of it from the B&A at Post Road Crossing (the crossing of  the Albany Post Road) to Schodack Junction on the east side of the Hudson River became the B&A Post Road Branch. The rest became the New York Central Railroad's Castleton Cut-Off.

Station and landscape design program
The B&A undertook a significant program of improvement and beautification in the 1880s and 1890s. Beginning in 1881, the B&A hired architect Henry Hobson Richardson to design a series of passenger stations. Over the next five years, Richardson was responsible for nine B&A stations (Auburndale, Chestnut Hill, Elliot, Waban, and Woodland (Newton, MA), Wellesley Hills, Brighton, South Framingham, and Palmer), as well as a dairy building; he also provided designs for passenger cars. At the same time, the B&A hired landscape architect Frederick Law Olmsted to design the grounds of several stations and to work with the railroad to establish a landscape beautification program for other stations. After Richardson's death, the B&A commissioned his successors, Shepley, Rutan and Coolidge, to design twenty-three additional stations between 1886 and 1894. The B&A's innovative program of well-designed stations and landscape served as a model for several other railroads around the turn of the 20th century. 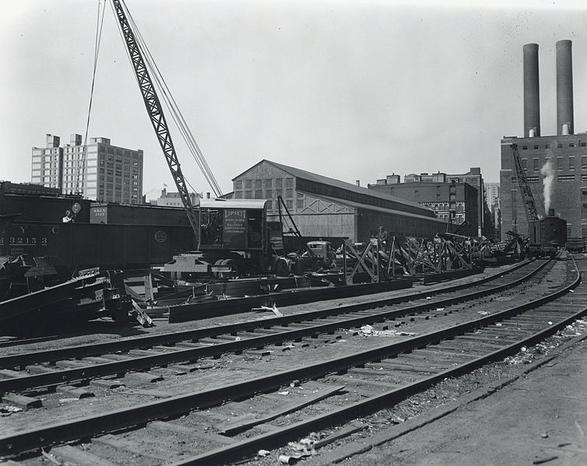 Scenes on the Boston and Albany. 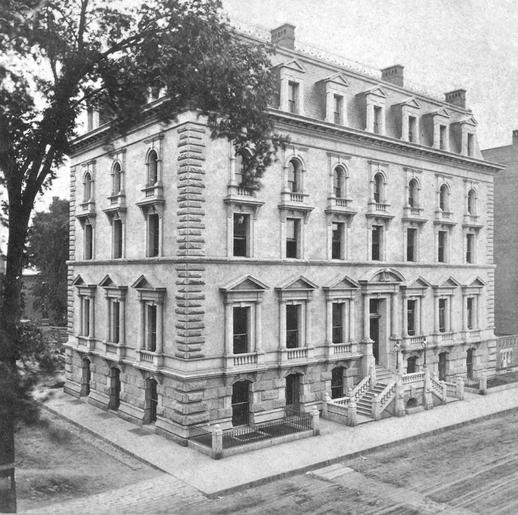