Looking north at roundhouse and turntable, with B&LE No. 878, an EMD SD38-2 diesel locomotive, beside stall 1, at the Bessemer and Lake Erie Railroad, Greenville Shops.  Library of Congress 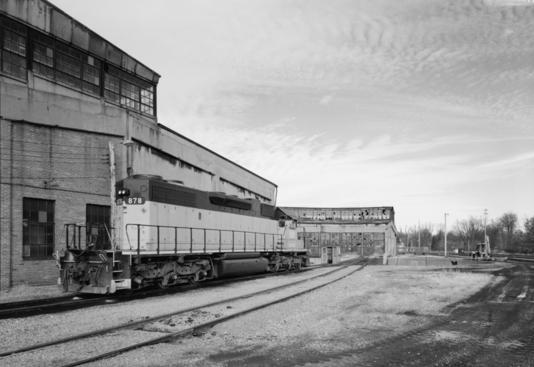 The railroad's main route runs from the Lake Erie port of Conneaut, Ohio to the Pittsburgh suburb of Penn Hills, Pennsylvania, a distance of 139 miles. The original rail ancestor of the B&LE, the Shenango and Allegheny Railroad, began operation in October 1869.

Rail operations were maintained continuously by various corporate descendants on the growing system that ultimately became the B&LE in 1900. In 2004 the B&LE came under the ownership of the Canadian National Railway as part of CN's larger purchase of holding company Great Lakes Transportation. As a subsidiary of CN the B&LE has been largely unchanged (though repainting of B&LE locomotives into CN paint with "BLE" sub-lettering began in April 2015) and still does business as the B&LE. 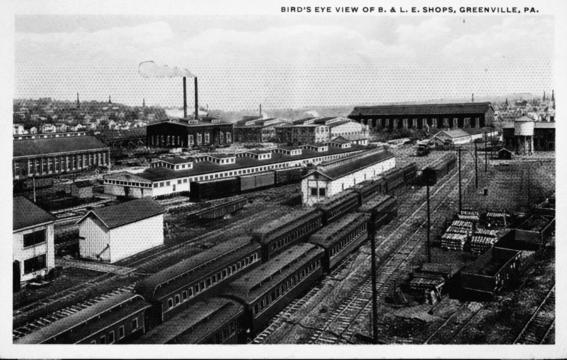 The main rail yard and locomotive and car shops are in Greenville, Pennsylvania. Although the B&LE acquired some early diesel-electric switching locomotives painted black with yellow trim, in 1950 the company adopted a locomotive color scheme of bright orange and black which is still in use. Because the B&LE's primary traffic is iron ore, it adopted rust-colored hoppers so the ore wouldn't produce noticeable stains on its cars.

The B&LE carried passengers many years ago, and indeed kept a spur line from its main line east to Conneaut Lake Park amusement park for dropping off and picking up excursionists visiting the park.

The B&LE main line divides around Greenville, between a waypoint north of the Village of Osgood called 'KO' and another waypoint near the Village of Kremis that used the telegraph call name 'KY', for the "Osgood-Kremis" cut-off ("K-O") that joined the original "Old Line" there. The latter still winds down along the Little Shenango and Shenango Rivers into downtown Greenville (where the B&LE shops are located), and then climbs back up to Kremis, en route to Fredonia and North Bessemer. The B&LE constructed the shortcut K-O Line in 1901-02 to bypass the steep, winding route through Greenville. From 'KO Junction', it runs south over a long (1,724 feet) viaduct above the Little Shenango River, the original B&LE Old Line, the former NYC RR's JF&C Branch and the former Erie RR's Chicago—New York main line at Osgood. It then passes east of downtown Greenville at a relatively high elevation, and rejoins the original line at KY, near Kremis. The K-O Line cut-off shortened KO to KY run by 3.1 miles vs. the Old Line. Except for the Osgood Viaduct, this cut-off was double-tracked for many years but, since the arrival of CTC signaling in the Fifties, is now entirely single track.

There was originally one tunnel on the B&LE mainline at Culmerville, but it was dug out or "daylighted" in 1922, converting it to an open cut through a hill.

As it approaches Bessemer, the B&LE is also noticeable where it crosses the Allegheny River on the 2,327 feet Bessemer & Lake Erie Railroad Bridge immediately east of and parallel to the Pennsylvania Turnpike.