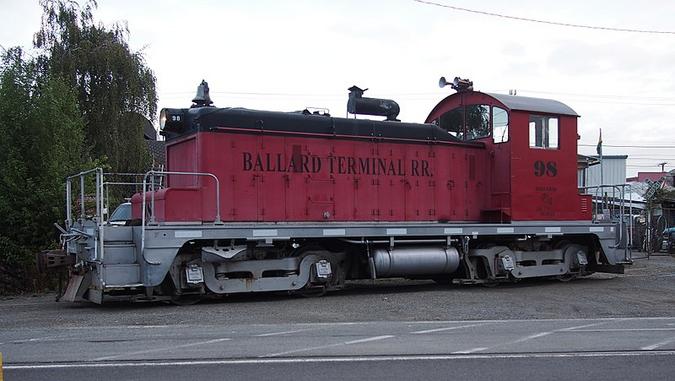 Foundation
Burlington Northern Santa Fe Railway stopped offering service on a three-mile spur through Seattle's Ballard neighborhood in January 1997 because only three companies were buying rail shipments, a traffic volume too low to sustain the line according to BNSF. To ensure continued rail service, the three previous customers served by the spur and a fourth company joined with other investors to form the Ballard Terminal Railroad Company, LLC in 1997. The Ballard Terminal Railroad refurbished two locomotives and approached the state of Washington seeking approximately $300,000 in financing to refurbish the track. The railroad began operation in early 1998 with a 1940s-era locomotive formerly belonging to the Milwaukee Road.

Ballard Terminal
The Ballard Terminal Railroad spur begins at its connection to the BNSF mainline at the Shilshole yard just north of N.W. 68th Street. The line follows a route along Seaview Avenue N.W. toward Shilshole Ave N.W. which the line parallels until N.W. 45th Street. The line follows N.W. 45th Street until Leary Way N.W., which the line then parallels, passing the Bright Street Yard, then reaching its terminus at N.W. 40th Street and 6th Ave N.W. near the border between the Ballard and Fremont neighborhoods. The Ballard Terminal Railroad owns its tracks outright, but has a 30-year lease on the land underneath, which belongs to the city of Seattle. Most of the railroad was originally part of the Great Northern Railway's main line, moved to the west when the Lake Washington Ship Canal was built.

Eastside Rail Corridor
On April 1, 2013 Ballard Terminal Railroad filed a federal lawsuit aimed at preventing the City of Kirkland from converting the section of the Eastside Rail Corridor which passes through the city into a trail. On May 3, 2013 Federal District Court Judge Marsha Pechman granted the City of Kirkland's motion to dismiss the case filed by Ballard Terminal Railroad Company seeking to prevent rail salvage on the Cross Kirkland Corridor. In her oral ruling, Judge Pechman stated the Federal District Court did not have jurisdiction to consider Ballard's temporary restraining order (TRO) and that the Surface Transportation Board was the proper forum for adjudicating Ballard's claims. On Aug. 1 2013 the Surface Transportation Board denied the request by Ballard Terminal Railroad Company to block rail removal along the Cross Kirkland Corridor.

Awards
In 2007 the Ballard Terminal Railroad received the Jake Award With Distinction, a safety award given by the American Short Line and Regional Railroad Association to railroads with no reported injuries.