The "2-spot" on the turntable.

Jones found employment as an engine wiper at the age of 13 with the 3 ft (914 mm) narrow gauge South Pacific Coast Railroad at Boulder Creek, California. At 17, Jones was promoted to fireman, and later became an engineer. The South Pacific Coast Railroad, which had been acquired by the Southern Pacific Railroad, was converted to a standard gauge road by 1909. Jones was among the first to work the first standard gauge portions of the line out of San Jose, ultimately advancing to the Coast Daylight run between San Francisco and San Luis Obispo. After World War II, he was in charge of the reassembly of the preserved locomotive Gov. Stanford for Stanford University; the locomotive is currently on display at the California State Railroad Museum in Sacramento.

Jones married Geraldine McGrady, the schoolteacher at Wright's Station, located south of Los Gatos. After settling down in Los Gatos on a 9-acre (3.6 ha) prune orchard known as "The Ranch", the Jones family grew to include two sons, Robert and Neal, and two daughters, Betty and Geraldine. The Ranch was located at the corner of Daves Avenue and the Santa Clara-Los Gatos Road (today's Winchester Boulevard).

Billy Jones Wildcat Railroad
On the docks of San Francisco in 1939, Jones discovered an 18 in (457 mm) gauge steam locomotive built in 1905 and designed to run on the Venice Miniature Railway in Venice Beach, California. He bought the little engine, nicknamed the 2-spot, for $100 and got it running again on a miniature railway he and his railroad buddies constructed on the ranch, dubbed the "Wildcat Railroad".

His only sons Robert and Neal had both perished during World War II, and Jones operated his "Wildcat Railroad" for the neighborhood children, every Sunday until his death in 1968, in memory of his two lost sons. The railroad attracted people from across the valley and beyond, including Walt Disney, who considered purchasing some of Jones' collection of miniature railway equipment. The two became friends, and Jones was behind the throttle of Disney's 3 ft (914 mm) narrow gauge locomotives on opening weekend at Disneyland on July 17, 1955. In addition, the Wildcat Railroad's logo, depicting a smiling cartoon wildcat with an engineer's cap, was designed by Disney animator Ward Kimball.

Jones retired from the Southern Pacific Company in 1949. In January 1959, it is said Jones ceremoniously ran the last train out of Los Gatos before the rails were taken up throughout the town.

Jones died of leukemia in 1968 at the age of 83, and his "Wildcat Railroad" was purchased by local residents who formed a non-profit organization to relocate and operate it at Oak Meadow Park and Vasona Park in Los Gatos (a plaque on a wall at the corner of Winchester and Daves marks the original location of the railroad). The railroad opened for regular operations in July 1970 after nearly two years of restoration and construction, which included salvaging an 89-foot (27.13 m) Southern Pacific piggyback flatcar from a wreck and using it as a bridge over Los Gatos Creek. In 1972, a one-and-a-half-mile (2.4 km) extension was built, adding a working grade with a 40-foot (12.19 m) trestle and bringing the railroad into Vasona Park, an extension built following complaints that the ride was too short (the original route simply went around Squirrel Hill and came back, the bridge over the creek being double-tracked so the train could run in both directions to even out the wear on the rails; after the extension, it remained double-tracked until the mid-1990s, when it was single-tracked, and fencing was added between the two pedestrian paths and the tracks). By 1992, the railroad was averaging well over 100,000 riders each year.

In 1994, the 2-spot was in need of a new boiler and complete overhaul. In the meantime, the new diesel, dubbed No. 2502 and painted in the Southern Pacific's Black Widow paint scheme, would serve as the primary locomotive of the railroad for eleven years. After a ten year restoration project, the 2-spot finally returned to service in July 2005. The occasion marked the 100th birthday of the steam locomotive and also celebrated the 35th anniversary of the Billy Jones Wildcat Railroad in Vasona Park.

The railroad purchased another diesel locomotive in 2006 and dubbed it No. 3502. It wears the colors of the Chicago and North Western Railway. No. 3502 started construction at the Chicago Locomotive Works, but was finished by the Merrick Light Railway Works after CLW went out of business (CLW had a history of trying to scam the railroad). No. 3502 was later named Larry H. Pederson, in honor of a railroad board member. Both diesels, built in the style of an EMD GP60M, continue to operate weekdays during summer and weekends during winter and early spring. A third diesel, No. 4, built in 2005 by volunteer Tom Waterfall in the style of a Davenport Locomotive Works locomotive, is used in work train service, and also sees use as a yard switcher. The restored 2-spot operates weekends from late spring until the end of fall, with sporadic weekday appearances.

In May 2013, the railroad took delivery of a second steam locomotive, No. 5. The locomotive is a 4-6-2 oil burner built by the Merrick Light Railway Works, which also built 3502. The 5-spot was put in rotation with the 2-spot to avoid having to use 2502 or 3502 when either steam locomotive breaks down. Several local media outlets printed information that the 2-spot would be retired, and the 5-spot would replace her. However, railroad management stated on Facebook that the 2-spot would "always be a staple of the railroad". No. 5 is identical to locomotive No. 1919, which operates at the Little Amerricka Amusement Park in Marshall, Wisconsin, the only difference being that No. 1919 runs on a gauge two inches narrower than the BJWRR.

The railroad had owned another steam locomotive, No. 3, a 2-6-0 oil burner that had operated on the Venice Miniature Railway with No. 2, before operating at the Eastlake Park Scenic Railway as No. 1903. The locomotive was planned to be restored to operation, but was eventually sold to volunteer Ken Middlebrook when it was determined that the 3-spot was too small to handle the trains. In its place, the railroad opted to commission Merrick to build the more powerful No. 5. Middlebrook is currently restoring the locomotive.

The railroad owns five open-air passenger cars, four of which came from Billy Jones' ranch, and a special handicap car for wheelchair passengers. Each of the regular cars can seat up to 24 passengers, while the handicap car can seat up to three wheelchairs or roughly 12 passengers. A train composed of all five cars can carry 108 passengers. This can create capacity issues on the railroad's busiest days. To alleviate this issue, the railroad commenced construction on a fifth regular car, which is slightly different in construction, using modular seats for easier cleaning. Because the original car drawings are lost, the railroad had to resort to reverse-engineering one of the existing cars. The car, named LIVE OAK, entered revenue service on December 10, 2016. A full six-car train can seat up to 132 passengers at once, 120 if the handicap car is not used. In addition to the passenger cars, the railroad also owns a utility flat and a ballast hopper for work trains, plus three flatcars donated to the railroad in 2015, one of which recently had a pair of couplers attached. A self-propelled motorcar affectionately known as the "Putt-Putt" was used as a weed-spraying car until it was scrapped sometime in 2012 for being unsafe, as well as the city forbidding the use of conventional weed spray in Vasona Park, forcing the railroad to use its own blend, as well as pull weeds by hand.

Historic Savage carousel
The Billy Jones Wildcat Railroad also operates a historic Savage carousel named after one of the organization's founders, William "Bill" Mason. The carousel is located next to the railroad's depot in Oak Meadow Park and has its own unique history, having taken part in the 1915 Panama–Pacific International Exposition in San Francisco. 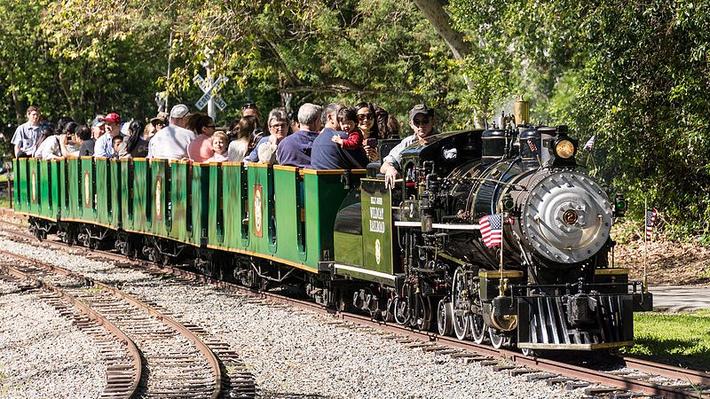 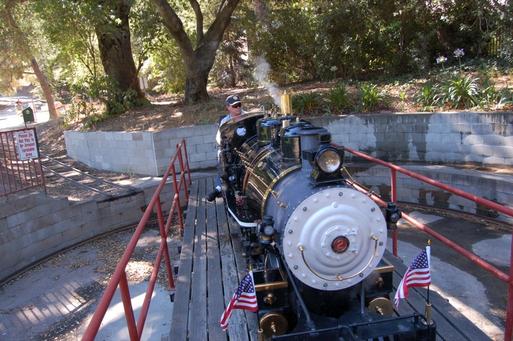 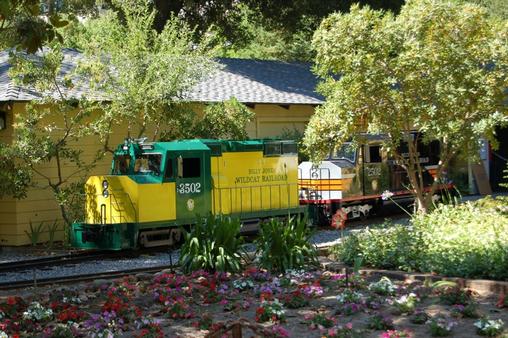