The BPRR is owned by Genesee and Wyoming. Its main line runs between Buffalo, New York and Eidenau, Pennsylvania, north of Pittsburgh. Here, connections are made to the city center via the Allegheny Valley Railroad. The system runs largely on former Baltimore and Ohio Railroad (B&O) lines. The entire BPRR system is 729 miles (1,173 km).

B&P initially used the direct former B&O/BR&P main between Buffalo and Salamanca, but during the 1990s a failing bridge at Springville, New York forced the railroad to detour its trains north of Ashford Junction via the former Rochester & Southern track to Machias Junction, New York, thence north on Conrail's/Norfolk Southern's ex-Pennsylvania Railroad Buffalo Line to Buffalo. Buffalo & Pittsburgh now is the sole user of the ex-PRR south of CP-GRAVITY in Buffalo.

Other lines
BPRR operates two key secondary lines. One runs between Erie and Johnsonburg along the former Allegheny and Eastern Railroad. Another is made up of former Pittsburg and Shawmut Railroad tracks, running from the Armstrong Power Plant in Reesedale to Freeport, Pennsylvania. The B&P also operates on the Low Grade between DuBois and Driftwood that was formerly used by the Pennsylvania Railroad, then Conrail. A portion of the former B&O Northern Subdivision is used to provide access to Petrolia, PA.

CSX Transportation also leases the P&W Subdivision to the B&P between Allison Park and the New Castle Yard in West Pittsburg, just outside New Castle, PA. Though the B&P ends in Allison Park, the railroad rarely traverses the line down to the borough. Instead, it transfers its goods to the AVR either in Evans City or Bakerstown depending on the amount of freight it has. Other owned and operated branch lines travel to Homer City, St. Marys, and Brookville, Pennsylvania, as well as to the Buffalo suburb of Orchard Park, New York.

History
Operations began in 1988 over mostly former Baltimore & Ohio Railroad (formerly Buffalo, Rochester & Pittsburgh) lines. In the early 2000s, the BPRR merged other GWI railroads into it. These lines include the Allegheny and Eastern Railroad (ALY), Pittsburg and Shawmut Railroad (PSR), and the Bradford Industrial Railroad (BR).

In 2006, the railroad was honored as the Regional Railroad of the Year by industry trade journal Railway Age magazine.

Buffalo and Pittsburgh Railroad No. 203. 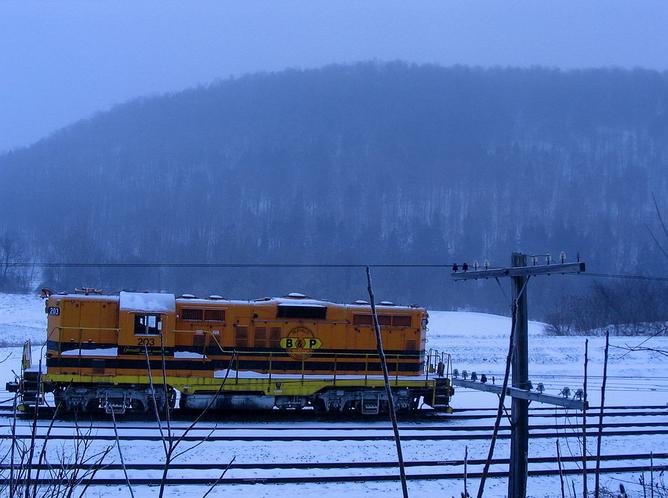