History
The railroad was started in 1983 by a group of volunteers who wanted to preserve a scenic section of the former Fort Dodge, Des Moines and Southern Railroad. The original track was built in the 1890s and electrified in 1907. After massive flooding damaged the power plant (located at Fraser, Iowa) providing electricity to the line in 1954, the railroad soon turned to diesel equipment to pull its trains. The Chicago & North Western (CNW) purchased the entire FDDMS system in 1968. Shortly after acquiring the line, the Chicago & North Western began to place portions of it up for abandonment. In 1983, an eleven-mile section of the line was purchased by the Boone Railroad Historical Society, and its 2,254 charter members, for $50,000. This stretch of track, winding through the Des Moines River Valley, includes a 156' tall bridge spanning Bass Point Creek. The line runs from Boone, through the old coal mining town of Fraser, and ends at the site of the former junction with the Minneapolis & St. Louis Railway at Wolf.

The railroad, an immediate success, has expanded regularly since its founding. The permanent station, James H. Andrew Railroad Museum, and ticket office building in Boone, Iowa feature considerable parking areas for the busy summer season. The depot was dedicated in 1985.

In February 2002, UP donated 1.7 miles of the only remaining right-of-way from the FDDMS, and BSVY began to provide freight service.

Collection
The railroad owns numerous locomotives and dozens of cars.

One of the railroad's steam engines, former COER CLC 2-8-0 No.17, is most widely known for holding the historic title as the last operating common carrier steam locomotive in America. Purchased on February 9, 1987 it currently sits on display and is still painted with the CO&E's classic pyramid logo.

In 2002 the BSVY acquired and restored an GMD FP9, originally a Via Rail Canada passenger locomotive. Painted in Chicago and North Western Railway inspired colors, it powers the BSVR dinner train.

The railroad also runs a short trolley ride and has begun light freight switching at Boone industries in recent years. Its station is located just one block from the Union Pacific Railroad mainline. 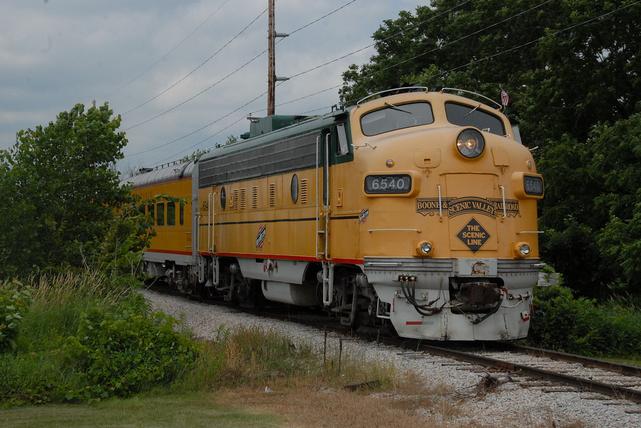