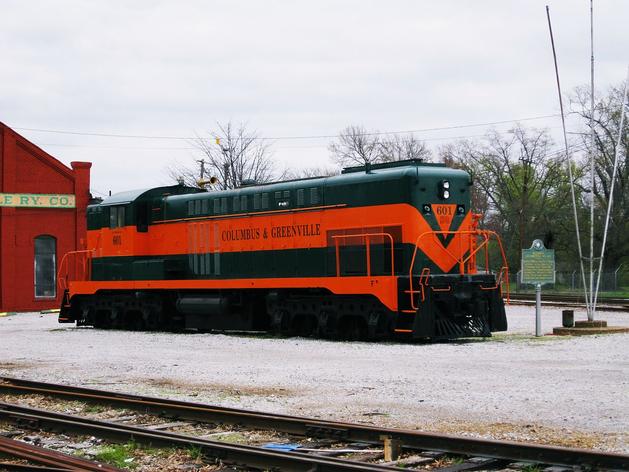 By 1950 all passenger service had been discontinued, however the company still had five passenger cars on its roster. Also in 1950, the C&G operated two through freights daily, bidding for bridge traffic from the west and southwest to the south and north. Although the company maintained two steam locomotives, they completely dieselized by 1950. That year also saw the company earn $1,994,204 in total operating revenue. The C&G continued operating until 1972 when it was purchased by the Illinois Central Gulf Railroad.

The company once specialized in transporting wood and paper products to and from local factories. The company's traffic base has expanded to include bricks, plastic products, feed grains for catfish and swine, finished and raw steel, and biodiesel as well as cotton and rice products. The company runs six trains a day, two between Greenwood and Greenville, two out of Columbus and two at the Severcorr steel mill between Columbus and Artesia.

The majority owner of the Columbus and Greenville is CAGY Industries, which also owns the Luxapalila Valley Railroad and the Chattooga and Chickamauga Railway.

In June 2008, CAGY Industries was purchased by Genesee & Wyoming, Inc.

The transition to diesel-electric power began in 1945 and represented the first time the Mississippi short line was able to buy brand new locomotives. The railroad turned to the Baldwin company in Philadelphia and ordered five 1500 HP road switcher units with six wheels on each truck to help distribute the weight over poor track conditions. This order was Baldwin's first diesel order in the United States. These locomotives served CAGY well for forty years, remaining in service until the 1980s. CAGY 601 and 606 are the only two survivors. 606 is on display at the Illinois State Railroad Museum in Union, IL and 601 is shown here on permanent display in Columbus, MS.    By Matthew Nichols (CAGY Baldwin Road Switcher) [CC BY-SA 2.0 (http://creativecommons.org/licenses/by-sa/2.0)], via Wikimedia Commons