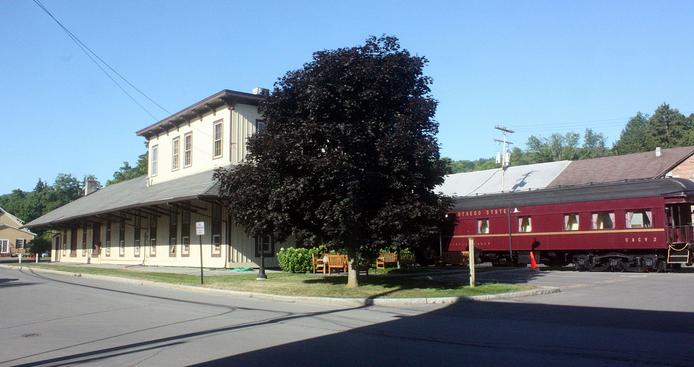 History
In 1865 the Articles of Association for the Cooperstown and Susquehanna Valley R.R. Company (C&SVRR) were filed. The stated purpose was to construct a railroad "from a point at or near the Village of Cooperstown to a point at or near Colliersville forming a junction with the Albany and Susquehanna Rail Road". In February 1868 work was started on the line. However, the first train was not run until July 14, 1869. The road was broad gauge (6 ft (1,829 mm)) to be compatible with the Albany & Susquehanna. On May 28, 1876, the entire 16 miles (26 km) was "narrowed up", "the work being completed by 4 p.m."

On June 6, 1880, the enginehouse of the C&SVRR burned, damaging the road's two engines and destroying a baggage car. The names of the engines were "The Otsego" and "Middlefield".

Two extensions of the C&SVRR were authorized by the State. The first was in 1869 from Cooperstown to Richfield Springs. The second was in 1885 for an extension from its "southern terminus ... to or near the 'Hemlocks' on the Charlotte creek in the town of Davenport."

In 1888 Articles of Association were filed for the Cooperstown and Charlotte Valley R.R. Co. (C&CVRR). The C&CVRR was likewise authorized to build from the "Hemlocks", but only as far as the lands of Matthew Ward in the town of Davenport.

The line was formed by "men in Cooperstown" in 1888 because Thomas Cornell was "procrastinating" in extending the Ulster & Delaware west from Bloomville to Oneonta. The plan was to extend the existing line from Cooperstown to Cooperstown Junction east. The intended route was "along the Charlotte Valley through Davenport Center, Harpersfield, thence to Cooksburg, onetime terminal of the Canajorie & Catskill, and down Catskill Creek to a connection with the West Shore Railroad".

Work on this railroad started after the blizzard of 1888. By 1889, "the track of the new C&CV progressed eastward for only 6 miles to West Davenport, though graders built culverts, fills and rock cuttings up the valley of Charlotte Creek beyond Davenport, well into Harpersfield Township, before the winter of 1889-90 set in."

Cornell died March 30, 1890, and his nephew Edwin Young became his executor. The Young family's "influence in Cooperstown was undoubtedly what stopped all further work on the C&CV. The track of the latter ended at Davenport Center and there it remained for many a year."

For several years there was a "Tally Ho" stage between Bloomville and Davenport Center for those who wished to travel from Kingston to Cooperstown.

In March 1899, the U&D began work west of Bloomville. When they reached Davenport Center, "no connection with the C&CV tracks was made, the new line traversing Charlotte Creek on a steel bridge, then following the north bank of the creek to West Davenport where a connection was made with the C&CV, the two roads using a joint station".

Delaware and Hudson ownership
In 1934, the New York State Public Service Commission permitted the discontinuance of passenger service on the C&CV. The last scheduled passenger train left Cooperstown on June 24.

The C&CVRR came under the ownership of the Delaware and Hudson Company in 1903 and became known as the "Cooperstown Branch" and was used "for freight only until 1930 when the rails were pulled up". The D&H built an ornate stone station in Cooperstown shortly after the takeover. Along with a branch to Cherry Valley, the former C&CV line became a rural feeder into the D&H mainline. The D&H constructed a turntable and small locomotive maintenance facility in Cooperstown which were removed in the 1950s. The C&CV was merged into the D&H effective March 1, 1957.

The line carried on a quiet existence, using Alco S switchers and even an RS-11 made an appearance in the 1960s. Through the 1960s the former C&CV line experienced declining traffic under D&H ownership.

Delaware Otsego ownership
The remaining segment of the C&CV line from Cooperstown Junction to Cooperstown was sold by the D&H in 1970 to the Delaware Otsego Corporation. The sale took place after Delaware Otsego was forced to sell an ex-New York Central Railroad line, following the construction of Interstate 88 between Binghamton and Albany.

Delaware Otsego resurrected the C&CV name which was last used in 1903 when the company was purchased by the D&H.

The CACV built new locomotive maintenance facilities at Milford, and the headquarters for Delaware Otsego Corporation were located in the former Cooperstown station, the stone passenger station that the D&H built shortly after the 1903 takeover of the C&CV having been sold during D&H ownership.

The CACV operated a heritage railroad during the 1970s using an ex-Virginia Blue Ridge Railroad 0-6-0 steam locomotive until 1974 and diesel locomotives for the remainder of the decade. Excursion trains continued with diesel locomotives on weekends until the mid-1980s.

Freight traffic on the CACV declined by the early 1980s to several cars per week, typically loads of lumber in Portlandville, animal feed at Agway in Milford, and several customers in Cooperstown.

The CACV was used during the 1980s to store large numbers of idle St. Lawrence Railroad boxcars. Several of these cars were stored on Clintonville Hill in the vicinity of milepost 7, secured only with handbrakes despite the steepness of the grade. Vandals released the brakes on several cars, which rolled southward and derailed at the foot of the grade. Metal pieces from the wreck can be found between the railroad right of way and the west bank of the Susquehanna River.

The last CACV freight train operated in December 1987, followed by infrequent equipment moves until being purchased by the Leatherstocking Chapter of the National Railway Historical Society in 1996.

Volunteers performed vegetation removal and trackbed rehabilitation before the line was reopened for seasonal passenger excursion trains between Cooperstown and Milford in 1999, retaining the CACV name.

The southern half of the line provides a connection to the Norfolk Southern Railway.

Initially, the CACV leased a former New York, Ontario and Western Railway locomotive as well as two locomotives from the Green Mountain Railroad. It currently owns and operates a pair of ex-Canadian National Railway MLW switchers (Alco S-4 and Alco S-7 designs) which were acquired from Atlas Steel in Welland, Ontario. These locomotives continue the numbering scheme used by the D&H for its S series switchers (CACV No. 3051 and No. 3052). As of later 2012 unit 3051 has been painted into a D&H scheme, with CACV lettering. The 3052 is being painted as time permits, in service with half black paint and half blue from its previous owner.

CACV also owns or has constructed Maintenance of Way equipment.