Western Maryland Shay No. 6 on the Cass Scenic Railroad at Whittaker Station. 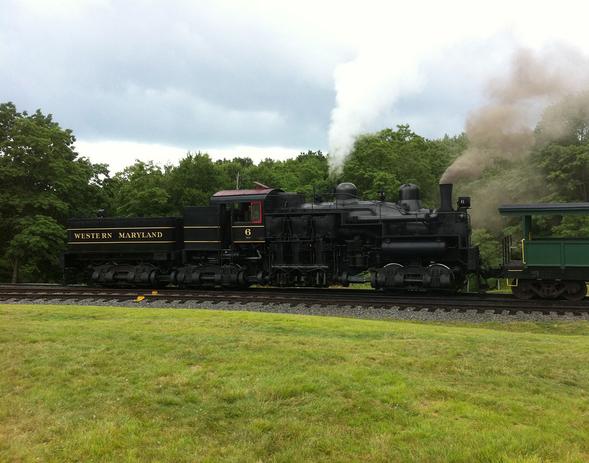 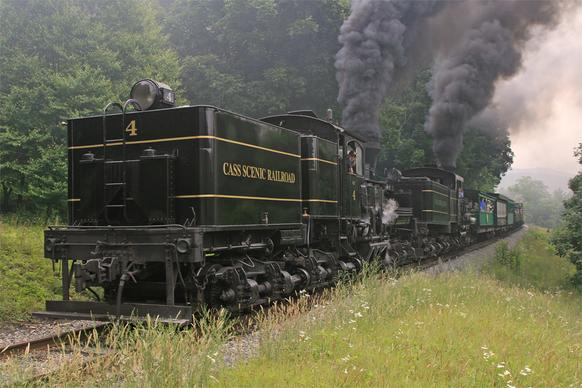 Cass Scenic Railroad Heisler No. 6 along with Shay No. 11 lead a loaded log train down the former C&O mainline. Note the Cass Country store which was built in 1902 in the background and that the locomotives have been lettered for predecessor logging railroads that operated at Cass.  Photo by Walter Scriptunas, II.

By Shayfan at English Wikipedia - Transferred from en.wikipedia to Commons., Public Domain, https://commons.wikimedia.org/w/index.php?curid=4733324 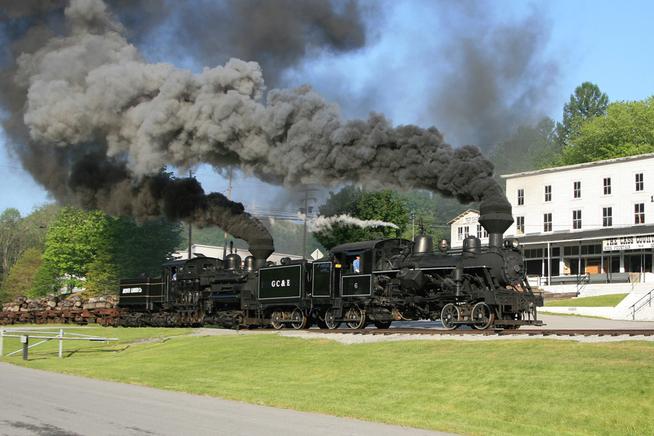 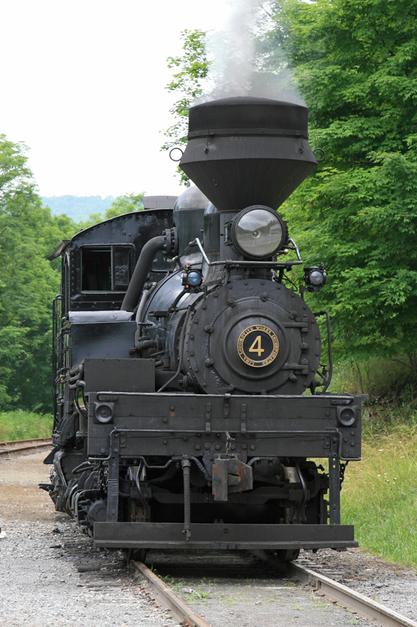 Shay locomotives No. 4 and No. 11 at Cass Scenic Railroad State Park.

It consists of the Cass Scenic Railroad, an 11-mile (18 km) long heritage railroad that is owned by the state of West Virginia. The park also includes the former company town of Cass and a portion of the summit of Bald Knob, highest point on Back Allegheny Mountain.

History
Founded in 1901 by the West Virginia Pulp and Paper Company (now MeadWestvaco), Cass was built as a company town to serve the needs of the men who worked in the nearby mountains cutting spruce and hemlock for the West Virginia Spruce Lumber Company, a subsidiary of WVP&P. At one time, the sawmill at Cass was the largest double-band sawmill in the world. It processed an estimated 1.25 billion board feet (104,000,000 cu ft; 2,950,000 m3) of lumber during its lifetime.

In 1901 work started on the railroad, which climbs Back Allegheny Mountain. The railroad eventually reached a meadow area, now known as Whitaker Station, where a logging camp was established for the immigrants who were building the railroad. The railroad soon reached to the top of Gobblers Knob, and then to a location on top of the mountain known as 'Spruce'. The railroad built a small town at this location, complete with a company store, houses, a hotel, and a doctors office. Work soon commenced on logging out the Red Spruce trees, which grew in the higher elevations.

The WVP&P originally had only been interested in the Red Spruce timber for the purpose of making pulp, which would be turned into paper. It wasn't until a few years later when the company realized that the mountain held a fortune in hardwoods, such as maple, cherry, birch and oak. The company decided that they would build a mill in the town of Cass, which could process these hardwoods.

The railroad eventually extended its track to the top of Bald Knob, the third highest mountain peak in West Virginia. This area was logged of its Red Spruce, and the track was torn up in the early 1910s. The track was also extended to a valley near the town of Spruce, at a bend in the Shavers Fork of the Cheat River. The WVP&P set up a new town here, with about 30 company houses, a large company store, a school, and a pulp mill, where the Red Spruce trees could be processed on the spot. This new town was also named Spruce, and the former town received its current name of Old Spruce.

In June 1942, WVP&P sold the Cass operation to Mower Lumber Company, which operated the line until July 1, 1960, cutting second-growth timber off Cheat Mountain. The mill and railroad were shut down by Mower in 1960, due to rapid decline of the timber industry in the region.

Following the 1960 closure, the rail line, land, and all equipment and rolling stock were sold to a holding company named the Don Mower Lumber Company (no relation to the former Mower Lumber Company), and the railroad was conveyed to the Midwest Raleigh Corporation, which started to scrap the railroad and equipment. However, a group of local businessmen led by Pennsylvania railfan Russell Baum convinced the West Virginia state legislature to make the Cass Railroad a state park. In 1963, the first tourist excursion train left the Cass depot for Whittaker Station (four miles up the line).

In 1977, the Cass Scenic Railroad State Park took possession of the entire company town of Cass, and the old hardwood mill in Cass.

Today, the railroad still operates the full length of the line to Bald Knob, but is now operated by the Durbin & Greenbrier Valley Railroad as of 2015. The future of the state park and its railroad is sadly unknown.

The railroad owns eight Shay locomotives, one Heisler locomotive, and one Climax locomotive, which is being restored by volunteers of the Mountain State Railroad and Logging Historical Association. The Heisler and the Climax, both made in Pennsylvania, were competition to Shay's geared locomotive design.

Former company houses have been refurbished and are available for rent through Cass Scenic Railroad State Park. A small cabin on Bald Knob is also available for rent, and cabooses can be reserved for private use as well.

Town and shop tours are available daily to visitors who would like to learn more about the town and its lumber industry, and see how the rare geared locomotives are maintained by the Cass shop crew. A tour of a recreated logging camp is available at Whittaker.

2015 transfer of operations
In October 2014, it was announced that the West Virginia Division of Natural Resources (WVDNR) was transferring their administrative responsibilities to another state agency, the West Virginia State Rail Authority (WVSRA). Under the new arrangement, the Durbin and Greenbrier Valley Railroad (D&GV) will assume day-to-day operations of the line as part of their existing contract with the WVSRA. D&GV will control scheduling of trains, staffing train excursions, and maintaining the railroad and its equipment. The takeover began in 2015.

The WVDNR will maintain ownership of the right-of-way and equipment as well as continue staffing and maintaining the non-railroad portions of the park, including the historic company town of Cass, the visitor's center, and the overnight cottage rentals that the park offers.