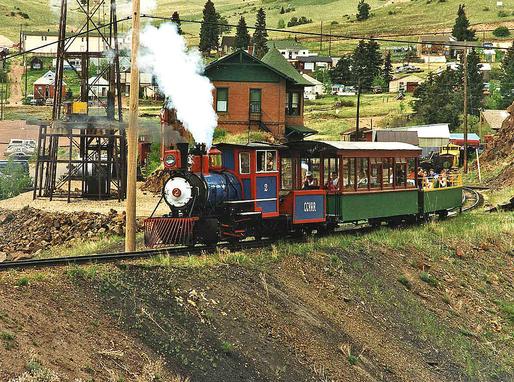 Rolling stock
As of the 2017 season, the railroad operates three coal-fired narrow-gauge steam locomotives. Engine No. 1 is an 0-4-4-0 Orenstein & Koppel articulated mallet built in 1902. Engine No. 2 is a 0-4-0 Henschel built in 1936. Engine No. 3 is an 0-4-0T H. K. Porter tank engine built in 1927. Engine No. 4 is a W. G. Bagnall 0-4-4-0T, built in 1947 which is under long term overhaul. The 5th engine is a 1951 General Electric, four wheel, diesel-electric engine that was battery operated for underground mining at the Idarado Mine near Telluride, Colorado. The engine is currently being used by the railroad's track crew.

Track route
The track system begins at Bennett Avenue/5th Street going south out of Cripple Creek, goes past the old Midland Terminal Wye, then over a reconstructed train trestle, continues past historic mines and terminates very near the abandoned Anaconda mining camp. The return trip to Cripple Creek completes a total of 4 miles (6.4 km). The railroad does not actually terminate at Victor, Colorado, as the railroad's name implies.