History
The Iowa Division of the Illinois Central Railroad began its service to Warren, Illinois in January 1854. By September 1854 the tracks ran to Scales Mound, Illinois and on October 31, 1854, the Illinois Central made it to Galena, Illinois. On June 12, 1855 the tracks were expanded to East Dubuque, Illinois. By December 1868 a draw-bridge was built over the Mississippi River to Dubuque, Iowa. The Dubuque Rail Bridge was rebuilt in the 1890s.

The railroad spun off from the IC with its distinct operations beginning on December 24, 1985. The IC repurchased the railroad in 1996 and operated it as a subsidiary until the IC itself was purchased by CN. The company continues to exist as a subsidiary of the Grand Trunk Corporation.

Structure
The railroad is organized into eight subdivisions and other spurs. The subdivisions listed from east to west include the following:

Cedar River Railroad
The Cedar River Railroad (reporting mark CEDR) is a shortline subsidiary of the Canadian National Railway that operates on former Illinois Central Gulf Railroad trackage. In 1991, the railroad was formed as a reorganization of the bankrupt Cedar Valley Railroad, which had begun operations in 1984. It was owned by the Chicago Central and Pacific Railroad, itself an ICG spin-off that was reacquired by the successor Illinois Central Railroad in 1996. 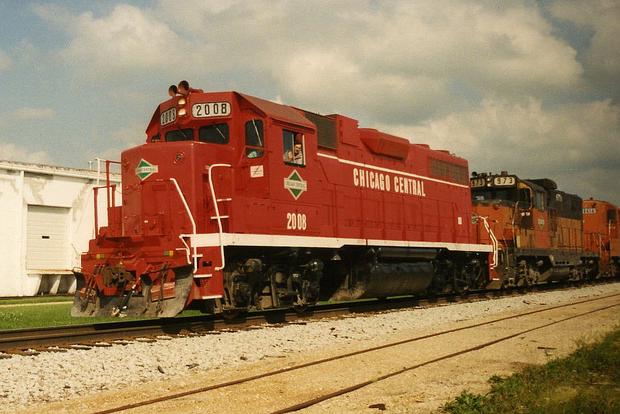 Chicago Central No.  2008 leads a westbound freight train through northern Illinois in 1993. Photo by Sean Lamb.

By The original uploader was Slambo at English Wikipedia - Transferred from en.wikipedia to Commons by IngerAlHaosului using CommonsHelper., CC BY-SA 2.0, https://commons.wikimedia.org/w/index.php?curid=9399197