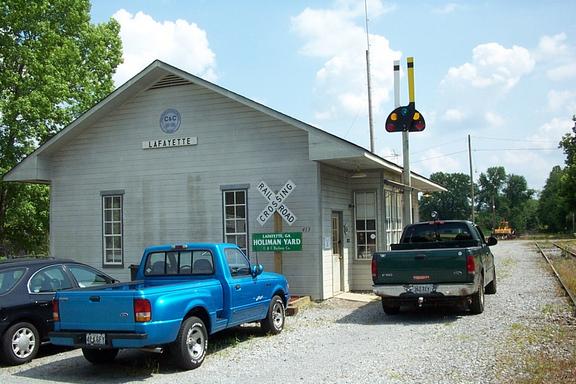 Chattooga & Chickamauga No. 103 at LaFayette, Georgia. 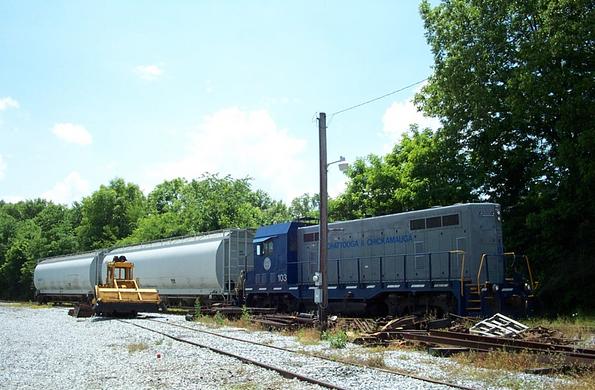 Chattooga and Chickamauga Railway
The Chattooga and Chickamauga Railway (reporting mark CCKY) is a short-line railroad which is headquartered in LaFayette, Georgia. The railroad operated 22 miles (35 km) of the Tennessee, Alabama and Georgia Railway (a.k.a. the TAG route) from Chattanooga, Tennessee to Kensington, Georgia, which reverted to the Norfolk Southern System and was partially removed after the Dow Reichhold Specialty Latex, LLC plant in Kensington closed in August 2008. The "C&C" also operates 42 miles (68 km) of the former Central of Georgia Railroad from Chattanooga to Lyerly, Georgia. That line is leased from the state of Georgia.

Locomotives
The locomotives the C&C operates are 102 (former Chicago and North Western Transportation Company EMD GP7), 103 (former Santa Fe CF7, now retired), 2050 (EMD GP38) and Columbus & Greenville 1804 (former Illinois Central GP11). Also, they use a Tennessee Valley Railroad Museum GP7 if one of their three locomotives is in repair or out of service.

Ownership
The CCKY is owned by the Georgia Department of Transportation, and operated by CAGY Industries. The operating lease was acquired in 2008 by Genesee & Wyoming, Inc.