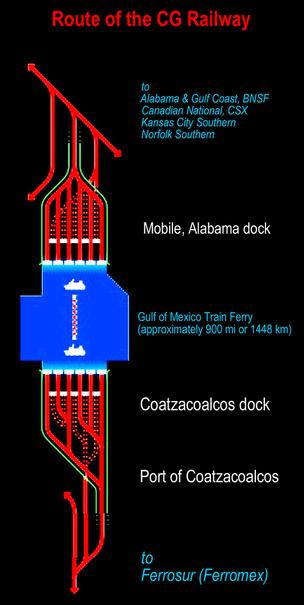 CG Railway
The CG Railway, Inc. (reporting mark CGR) is a terminal railroad as reported by the Association of American Railroads (AAR). The CGR is headquartered in Mobile, Alabama, and is owned and operated by a 50/50 joint venture between SEACOR Holdings and Genesee and Wyoming. The railroad operates an approximate 900-mile (1,400 km) train ferry between the Port of Mobile at Mobile, Alabama, and the Mexican Port of Coatzacoalcos in Coatzacoalcos, Veracruz. It began operations in 2000 out of Mobile, Alabama. In 2004 the railroad moved its American port to New Orleans, Louisiana. The Port of New Orleans facility was heavily damaged by Hurricane Katrina in 2005. In 2007 the Alabama State Port Authority agreed to construct a state of the art $19 million rail-ferry terminal at the Port of Mobile.The CGR connects with CSX Transportation, Norfolk Southern, BNSF Railway, Canadian National Railway, and Alabama Gulf Coast Railway all at Mobile, Alabama, and Ferrocarril del Sureste at Coatzacoalcos, Veracruz.

The railroad operates two double deck rail-ferries capable of carrying 115 railcars each. The vessels Bali Sea and Banda Sea operate between the two ports up to four times a week. Having been originally built with a single cargo deck, the vessels were limited to carrying rail cars on their main deck. In 2004, CGR contracted Naval Architects Bennett & Associates to increase the vessels' carrying capacity by adding a second deck. Bennett & Associates also designed an articulating ramp at each dock to allow rail cars to be loaded on both decks. Railcar loading and unloading is performed by the Terminal Railway Alabama State Docks at Mobile and by Ferrocarril del Sureste at Coatzacoalcos. The railroad operates two trackmobiles at each port to help with loading and unloading of railcars. The CGR transports approximately 10,000 railcars annually, carrying commodities such as chemicals & plastics, fructose & refined sugar, steel and pulp & paper. 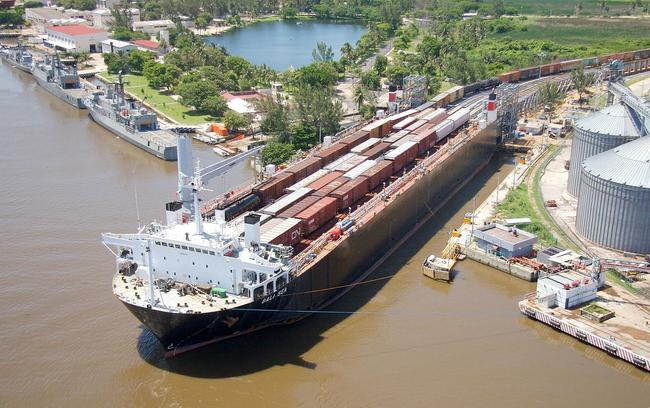 The MV Bali Sea rail ferry loads up with Ferrosur trains in Coatzacoalcos, Veracruz, Mexico, and will soon head for Mobile, Alabama.