Early 20th Century
In 1907, the panic of 1907 caused Stickney to lose control of the railroad, and ownership passed to financier J. P. Morgan. In 1910, the CGW introduced four McKeen Motor Car Company self propelled railcars, its first rolling stock powered by internal combustion engines. In the same year, the railroad also purchased ten large 2-6-6-2s from the Baldwin Locomotive Works. Two years later, the railroad acquired an experimental battery powered motorcar from the Federal Storage Battery Car Company. In 1916, the railroad began standardizing on 2-8-2 steam locomotives, which served through the 1920. During the 1920s, as ownership changed again to the Bremo Corporation, a group of investors led by Patrick Joyce, an executive at the Standard Steel Car Company, the railroad expanded its use of self-propelled vehicles. At the end of the decade, 36 2-10-4 steam locomotives were purchased from Baldwin and the Lima Locomotive Works. 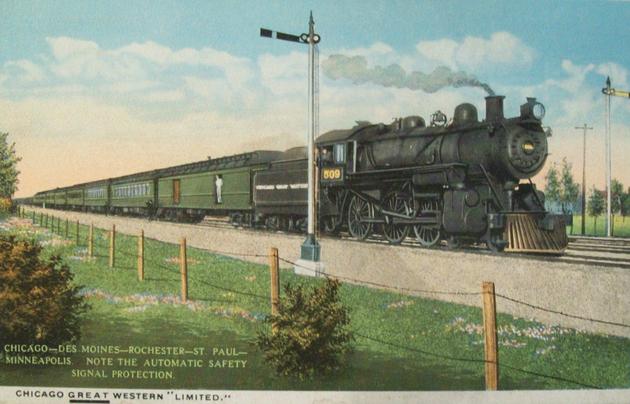 The Chicago Great Western Railway
The Chicago Great Western Railway (reporting mark CGW) was a Class I railroad that linked Chicago, Minneapolis, Omaha, and Kansas City. It was founded by Alpheus Beede Stickney in 1885 as a regional line between St. Paul and the Iowa state line called the Minnesota and Northwestern Railroad. Through mergers and new construction, the railroad, named Chicago Great Western after 1892, quickly became a multi-state carrier. One of the last Class I railroads to be built, it competed against several other more well-established railroads in the same territory, and developed a corporate culture of innovation and efficiency to survive.

Nicknamed the Corn Belt Route because of its operating area in the Midwest, the railroad was sometimes called the Lucky Strike Road, due to the similarity in design between the herald of the CGW and the logo used for Lucky Strike cigarettes.
In 1968 it merged with the Chicago and North Western Railway (CNW), which abandoned most of the CGW's trackage. 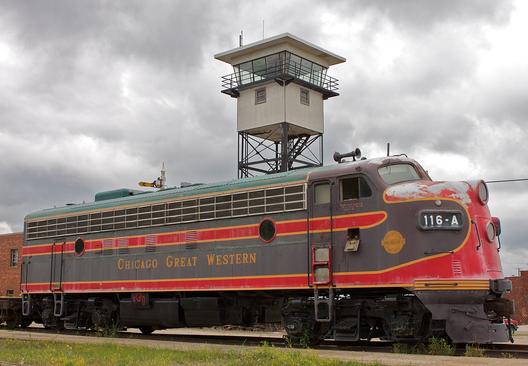 During the Great Depression, the railroad trimmed operations by closing facilities and abandoning trackage. It purchased its first diesel-electric locomotive, an 800 horsepower  yard switcher from Westinghouse, in 1934. In 1935, the CGW began trial operations of trailer on flatcar trains, which were expanded the following year into regular service, initially between Chicago and St. Paul, but rapidly expanding across the system by 1940. In 1941, it was reorganized in bankruptcy, and late in the decade a group of investors, organized as the Kansas City Group, purchased the CGW. In 1946, a demonstrator EMD F3 diesel locomotive set operated on the CGW, immediately prompting the company to purchase a wide variety of diesels, and by 1950 the railroad had converted completely to diesel motive power. In 1949, William N. Deramus III assumed the presidency, and began a program of rebuilding infrastructure and increasing efficiency, both by consolidating operations such as dispatching and accounting and by lengthening trains. In 1957, Deramus left the company, and Edward Reidy assumed the presidency.

Merger
As early as 1946, the first proposal was advanced to merge the Great Western with other railroads, this time with the Chicago and Eastern Illinois Railroad and the Missouri–Kansas–Texas Railroad. Upon the failure of a later merger opportunity with the Soo Line Railroad in 1963, the board of the Great Western grew increasingly anxious about its continued viability in a consolidating railroad market. Testifying before the Interstate Commerce Commission in Chicago, President Reidy claimed, "The simple fact is that there is just too much transportation available between the principal cities we serve. The Great Western cannot long survive as an independent carrier under these conditions." In 1965, the railroad ended passenger operations.

The CGW, therefore, was open to a merger with the Chicago and North Western Railway (CNW), first proposed in 1964. After a 4-year period of opposition by other competing railroads, on July 1, 1968, the Chicago Great Western merged with Chicago and North Western. At the time of the merger, the CGW operated a 1,411 miles system, over which it transported 2,452 million ton-miles of freight in 1967, largely food and agricultural products, lumber, and chemicals, for $28.7 million of revenue. Upon taking control of the CGW, the CNW rapidly abandoned most of the its former CGW trackage.

Passenger operations
The Chicago Great Western was not known for its passenger trains, although it did fleet several named trains, mostly running between Chicago and the Twin Cities. Regardless of the railroad's small size and meager passenger fleet it looked for ways to more efficiently move passengers, such as employing all electric (battery powered) and gas-electric motorcars on light branch lines, which was much cheaper to operate than traditional steam or diesel-powered trains. The CGW's most notable passenger trains from its major terminal cities included:

History of the Chicago Great Western
Predecessor Railroads
In 1835, the Chicago, St. Charles & Mississippi Airline railroad was chartered with the intent of building a railroad west out of Chicago. The railroad never began construction, and its rights to build were transferred in 1854 to a new company, the Minnesota & North Western (M&NW), which eventually began construction in 1884 of a line south from St. Paul, Minnesota to Dubuque, Iowa. In 1887, the Chicago, St. Paul & Kansas City Railroad acquired the M&NW, and by the end of the decade, under the leadership of St. Paul businessman A. B. Stickney, it had established routes west to Omaha, Nebraska, south to St. Joseph, Missouri, and east to Chicago, Illinois, via the Winston Tunnel near Dubuque. In 1892, the railroad was reorganized as the Chicago Great Western.

CGW 116-A in front of the Oelwein Tower.

A map of The Chicago Great Western, circa 1897. 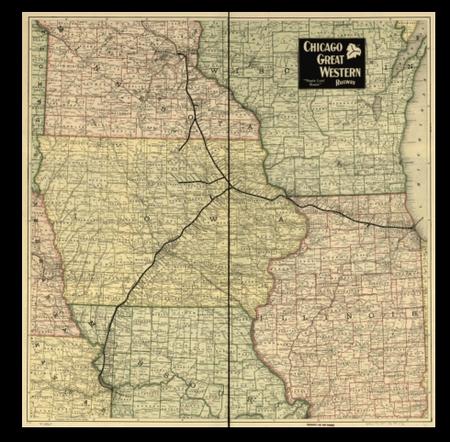 A CGW freight train passing through Elmhurst, Illinois, circa 1962.  Photo by Roger Puta. 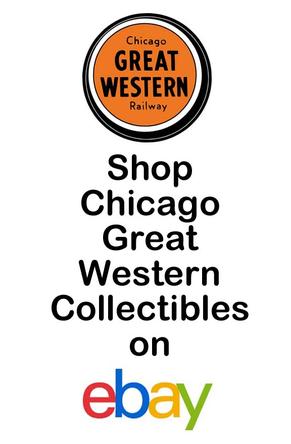 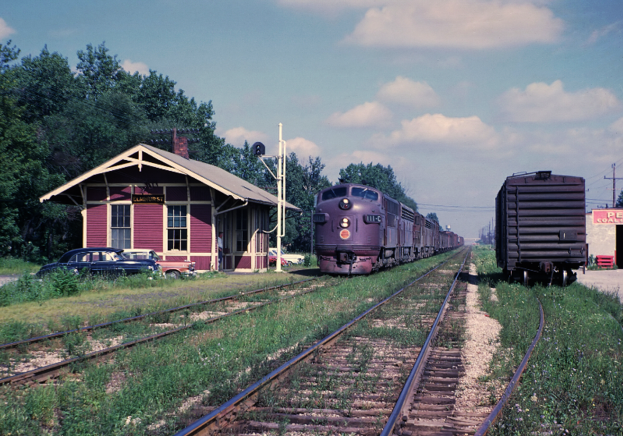