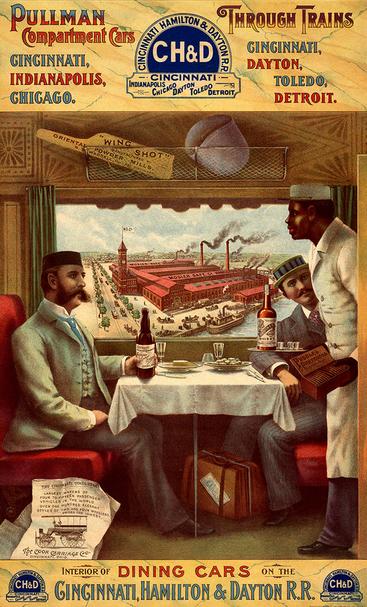 Cincinnati, Hamilton and Dayton Railroad (1846–1917)
The Cincinnati, Hamilton and Dayton Railroad (CH&D) was a railroad based in the U.S. state of Ohio that existed between its incorporation on March 2, 1846, and its acquisition by the Baltimore and Ohio Railroad in December 1917. (This railroad should not be confused with the Cincinnati, Hamilton & Dayton Railway, an Ohio interurban of exactly the same name which existed between 1926 and 1930.) It was originally chartered to build from Cincinnati to Hamilton, Ohio, and then to Dayton, a distance of 59 mi (95 km); further construction and acquisition extended the railroad, and by 1902 it owned or controlled 640 mi (1,030 km) of railroad.

Acquisitions
The original CH&D was founded by John Alexander Collins, who was born on June 8, 1815 in Staffordshire, England. He came to the US as a child in 1825, and worked as a locomotive engineer until moving to Ohio in 1851 to open the CH&D. Collins remained with the line until 1872, six years before his death in Covington, Kentucky. Collins is buried in Woodland Cemetery in Dayton, where his tombstone details his life and its work.

In 1886 the CH&D was among the railroads controlled by the financial speculator Henry S. Ives before his spectacular collapse the following year.