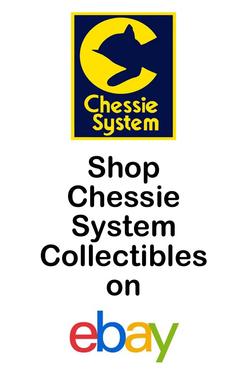 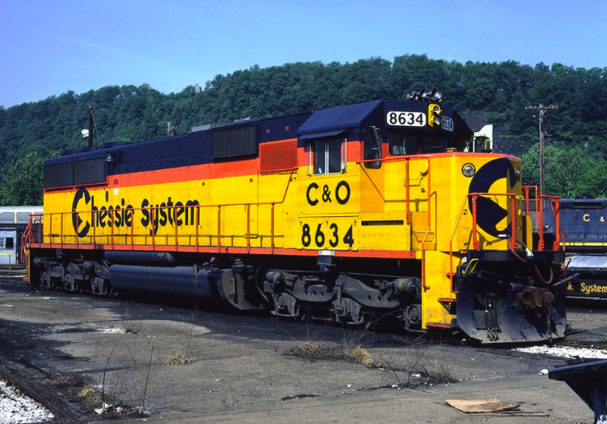 Chessie System
Chessie System, Inc. was a holding company that owned the Chesapeake & Ohio Railway (C&O), the Baltimore & Ohio Railroad (B&O), the Western Maryland Railway (WM), and several smaller carriers. It was incorporated in Virginia on February 26, 1973, and it acquired the C&O (which controlled the other companies) on June 15. C&O had been popularly known as "Chessie System" since the 1930s. The Chessie System operated in Delaware, The District of Columbia, Illinois, Indiana, Kentucky, Maryland, Michigan, New York, Ohio, Ontario, Pennsylvania, Virginia, West Virginia, and Wisconsin.

The three railroads had been closely related since the 1960s. C&O had acquired controlling interest in B&O in 1962, and the two had jointly controlled WM since 1967. On November 1, 1980, Chessie System merged with Seaboard Coast Line Industries to form CSX Corporation. However, the Chessie image continued to be applied to new and re-painted equipment until mid-1986, when CSX introduced its own paint scheme. The B&O and C&O were not legally merged out of existence until 1987, when the company's official successor, CSX Transportation was founded.

Headquartered in Cleveland, Ohio, the Chessie System was the creation of Cyrus S. Eaton and his protégé Hays T. Watkins, Jr., then president and chief executive officer of C&O. A chief source of revenue for the Chessie System was coal mined in West Virginia. Another was the transport of auto parts and finished motor vehicles.

The signature symbol of the Chessie System was its "Ches-C", a large emblem incorporating the outline of the C&O's famous "Chessie" the kitten logo. The Ches-C was emblazoned on the front of all Chessie System locomotives, and also served as the "C" in "Chessie System" on the locomotive's flanks, and on other rolling stock. The Chessie System itself did not own any locomotives or other rolling stock; rather, equipment would be placed on the roster of one of the three component railroads. While all three companies shared a common paint scheme of yellow, vermillion, and blue, actual ownership of the equipment was denoted by the reporting marks C&O, B&O, or WM. 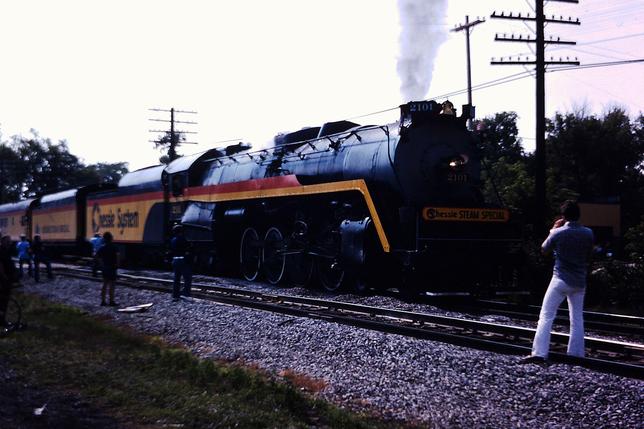 By JesseSvoboda (Own work) [CC BY-SA 3.0 (http://creativecommons.org/licenses/by-sa/3.0) or GFDL (http://www.gnu.org/copyleft/fdl.html)], via Wikimedia Commons 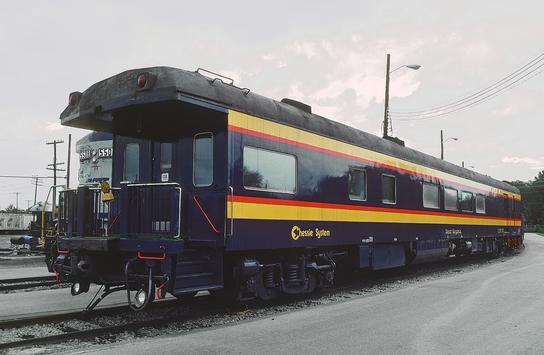 The Chessie System operated and exhibited a former Reading Company T-1 class 4-8-4 2101 on a national tour as the "Chessie Steam Special," beginning in 1977 in celebration of the B&O's 150th anniversary. The 4-8-4 had previously been used as one of three locomotives pulling the American Freedom Train. The train was painted in the Chessie System motif and consisted of the locomotive, two tenders, and eighteen to twenty passenger and baggage cars. The locomotive was severely damaged in a fire in March 1979 while stored in a Chessie System roundhouse. It has since been cosmetically restored, and is on static display at the B&O Railroad Museum in Baltimore.