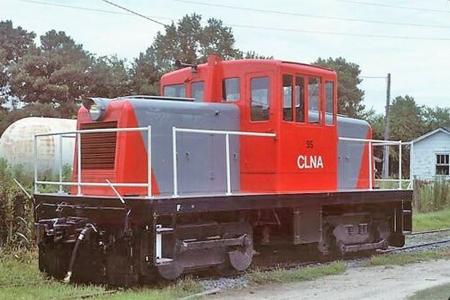 History
CLNA was created in 1989 under the Thoroughbred Shortline Program of Norfolk Southern and was a subsidiary of Rail Link, Inc., which became a subsidiary of Genesee and Wyoming in 1995. The original line was 17 miles (27 km) from Pinetown, North Carolina to Belhaven. CLNA interchanged with NS at Pinetown. CLNA was acquired by Main Line Rail Management, Inc. in 2003.

In 2006, CLNA began to serve a former NS branch between Whitney and Badin where Alcoa previously operated a large  aluminum plant.

On March 25, 2007, CLNA entered into a lease agreement with NS for the Plymouth-Raleigh route, 147 miles of the former mainline of the original Norfolk Southern.

In 2010, CLNA began providing contract switching services in Kinston, North Carolina. Also in 2011, CLNA began serving the Port of Morehead City by taking over the Morehead and South Fork.

In 2011, CLNA purchased a line between Rocky Mount and Spring Hope previously known as the Nash County Railroad. Also in 2011, CLNA began operating a former NS branch between Blacksburg, South Carolina and Kings Creek, South Carolina; operations on this branch ceased in 2013.