The following main lines were part of the Omaha Road:

Chicago, St. Paul, Minneapolis and Omaha Railway
The Chicago, St. Paul, Minneapolis and Omaha Railway or Omaha Road (reporting mark CMO) was a railroad in the U.S. states of Nebraska, Iowa, Minnesota, Wisconsin and South Dakota. It was incorporated in 1880 as a consolidation of the Chicago, St. Paul and Minneapolis Railway and the North Wisconsin Railway, The Chicago and North Western Railway (C&NW) gained control in 1882. The C&NW leased the Omaha Road in 1957 and merged the company into itself in 1972.
At the end of 1956 CStPM&O operated 1,616 miles of road and 2,396 miles of track; that year it reported 2,115 million net ton-miles of revenue freight and 65 million passenger-miles. 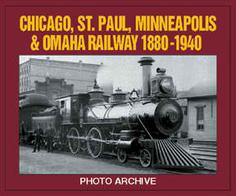