"Summer Homes", a booklet published by the Central New England Railway in 1900.

Central New England Railway
The Central New England Railway (reporting mark CNE) was a railroad from Hartford, Connecticut and Springfield, Massachusetts west across northern Connecticut and across the Hudson River on the Poughkeepsie Bridge to Maybrook, New York. It was part of the Poughkeepsie Bridge Route, an alliance between railroads for a passenger route from Washington to Boston, and was acquired by the New York, New Haven & Hartford Railroad in 1904.

Poughkeepsie Bridge: 1871-1899
Over the years, several plans had been made for a fixed span across the Hudson River south of Albany to replace the numerous car float operations. One of the most persistent was originally chartered in 1868 as the Hudson Highland Suspension Bridge Company, and would have crossed from Anthony's Nose to Fort Clinton, now roughly the site of the Bear Mountain Bridge.

The proposal that was eventually built was the Poughkeepsie Bridge at Poughkeepsie. The Poughkeepsie Bridge Company was chartered in June 1871 to build the bridge, and the first train crossed the bridge on December 29, 1888. The Hudson Connecting Railroad was chartered in 1887 to build southwest from the bridge, and about the same time the Poughkeepsie & Connecticut Railroad was chartered to continue the line northeast from Poughkeepsie. The bridge company had hoped to acquire the Poughkeepsie, Hartford & Boston Railroad, but was unable to, and so chartered the P&C to run parallel, ending at the Hartford & Connecticut Western Railroad at Silvernails, NY. The connections were not completed until 1889, and on July 22 the two approaches merged to form the Central New England & Western Railroad. That same year the CNE&W leased the Hartford and Connecticut Western, giving it a route from Hartford all the way across the Hudson River to Maybrook and Campbell Hall, New York. Maybrook/Campbell Hall soon became a major junction point for many railroads transferring cars to the CNE&W. The Delaware & New England Railroad was also formed in 1889 as a holding company to own the CNE&W and Poughkeepsie Bridge Company.

In April 1890 the CNE&W chartered the Dutchess County Railroad to run southeast from the east end of the bridge in Poughkeepsie to Hopewell Junction, the west end of the New York & New England Railroad (NY&NE) at the Newburg, Dutchess and Connecticut Railroad. The line opened May 8, 1892, giving the NY&NE a route to the bridge.

The Reading Company (RDG) bought the CNE&W and Poughkeepsie Bridge Company from D&NE in January 1892, extending RDG's influence to New England via the Pennsylvania, Poughkeepsie & Boston Railroad. The two companies merged on August 1, 1892 to form the Philadelphia, Reading & New England Railroad (PR&NE). RDG proved unable to handle its new acquisitions, and PR&NE defaulted on its interest payments in May 1893. The final reorganization came on January 12, 1899 with the formation of the Central New England Railway (CNE).

Central New England Railway: 1899-1927
The original Connecticut Western had from the start been interested in building a branch from Tariffville, Connecticut to Springfield, Massachusetts and the CNE finally began it in 1899. Thwarted by the New York, New Haven & Hartford Railroad's (NH) surreptitious grab of a parcel of land known as Montague Farm and legal maneuvers thereafter, the East Granby and Suffield Railroad had to be incorporated in 1901 to build a loop around the farm and rejoin the branch which connected with the Boston & Albany Railroad at Agawam Junction in West Springfield, Massachusetts. From West Springfield to Springfield, trackage rights were obtained over the B&A. The branch opened on September 12, 1902. Less than six months after the Springfield extension debuted via the loop, the Montague property was suddenly obtainable for a pittance. CNE then completed the last 313 feet of the original line, which it had to charter separately as the Short Line Railroad Company, and passenger trains began to run via the farm on March 9, 1903. The loop was retained briefly for freight use but was ended by May 1904. NH acquired financial control of CNE that same year, mostly for the Poughkeepsie Bridge and western connection at Maybrook that it would soon develop to its fullest potential. CNE was allowed to operate separately, but the lease of the Dutchess County Railroad was assigned to NH on December 1 to allow its access to the bridge. The Newburg, Dutchess & Connecticut Railroad and Poughkeepsie & Eastern Railway (P&E) acquired by the NH in 1905 and 1907, were both assigned to the CNE and merged into it June 25, 1907 (along with the Dutchess County Railroad). The ND&C gave CNE a route from Millerton southwest to the Hudson River at Beacon, intersecting the Dutchess County at Hopewell Junction, and P&E ran parallel to the main line from Boston Corners southwest to Poughkeepsie. By 1915 the former NY&NE from Hopewell Junction to Danbury, Connecticut would be also be transferred to CNE.

In 1910 the Poughkeepsie & Connecticut main line was abandoned in favor of the parallel Poughkeepsie & Eastern Railway from Pine Plains, New York southwest to Salt Point where the two lines had crossed The P&E used trackage of the Newburg, Dutchess & Connecticut Railroad (also merged into the CNE in 1907) from Pine Plains southwest to Stissing, NY. Connections were built at both ends of the abandonment.

New York, New Haven & Hartford Railroad and successors: 1927- present
CNE had the steepest grades of the various east-west routes of the NH; most bridge traffic was routed via the former NY&NE to Hopewell Junction. In 1932 the former Rhinebeck & Connecticut Railroad was abandoned from Copake (north of Boston Corners) southeast to the state line, cutting the CNE in two.

The Hartford & Connecticut Western Railroad was owned by NH through the CNE, but was not merged by the mid-1930s when NH became bankrupt. On December 31, 1937 the H&CW filed a reorganization plan. After a long reorganization, H&CW was merged into the NH on September 18, 1947 (along with the Providence, Warren and Bristol Railroad and Old Colony Railroad); by then all of the H&CW but the easternmost section had been abandoned.

At the time of the 1969 merger of the NH into Penn Central, all that remained of the original CNE was the westernmost section, from Maybrook over the Poughkeepsie Bridge and southeast along the Dutchess County Railroad to the former NY&NE as well as the easternmost portion to the northern part of Bloomfield, CT, from Hartford. The westernmost section was part of the Maybrook Branch, continuing east over former NY&NE and other lines to Derby. With the 1974 closure of the Poughkeepsie Bridge, the Maybrook Branch was abandoned west of Hopewell Junction. In 1976 the remaining line became part of Conrail. The Connecticut Department of Transportation later acquired it and in January 1999 the Central New England Railroad acquired the 8.7 mile (14 km) Griffins Industrial Track. 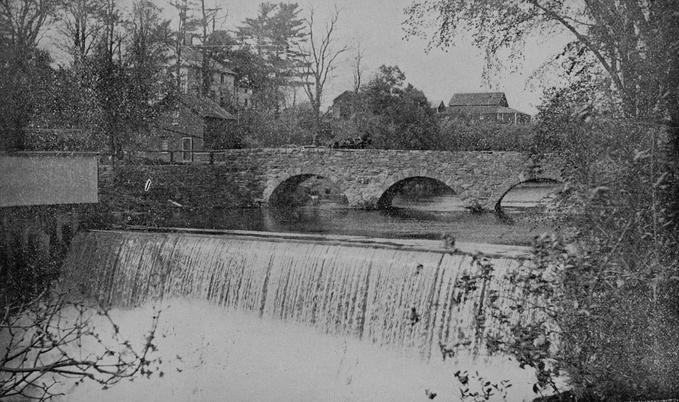 This quiet village in Columbia county is emphatically a place of rest—a good place for tired people to go for a reposeful vacation.The driving roads in the vicinity are excellent, there is exceptionally fine fishing, a number of small lakes within a short distance teeming with bass. The gunning is also very good, there being quail,woodcock and partridge in abundance. 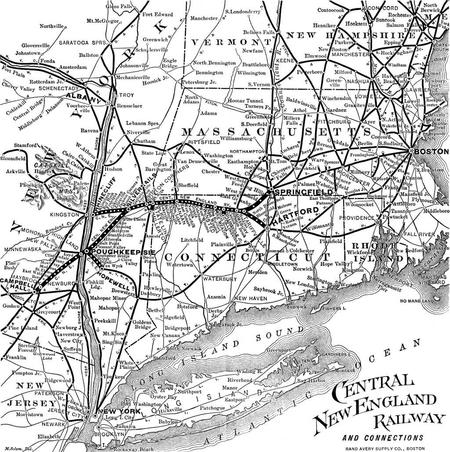 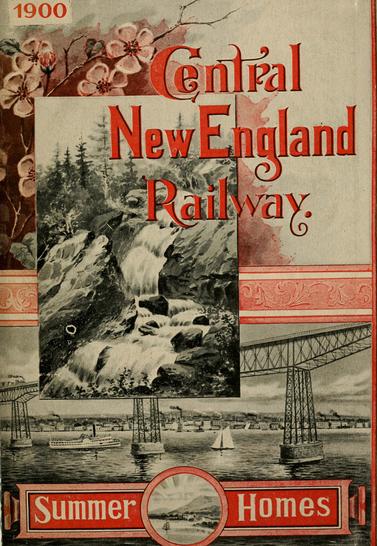 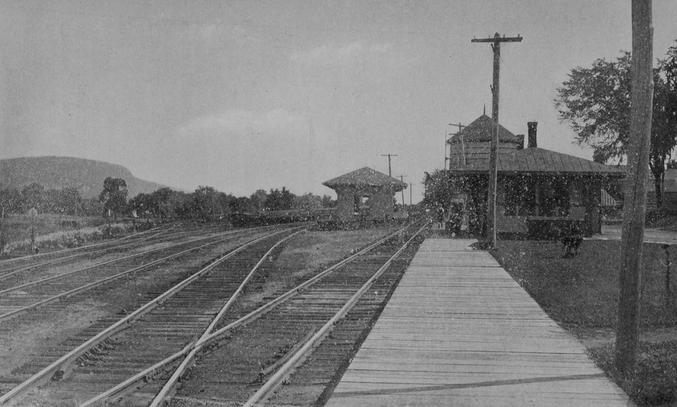 CANTON, Hartford County, Conn. A short walk from the station brings us to a pleasant little village located in the midst of a beautiful farming country. This little hamlet is known as Canton street. Canton Center and North Canton are more easily reached from Cherry Brook station.