A Dining Car on the Queen and Crescent Route.

The Cincinnati, New Orleans and Texas Pacific Railway
The Cincinnati, New Orleans and Texas Pacific Railway (CNO&TP) (reporting mark CNTP) is a former Class I railroad running from Cincinnati, Ohio, south to Chattanooga, Tennessee, and formed part of the Southern, now Norfolk Southern Railway system. It owns no tracks, as the route that it operates, the Cincinnati Southern Railway, is owned by the City of Cincinnati and is leased to CNO&TP. It is the sole long-distance railway owned by a municipal government in the U.S. This lease will expire in 2026, and has an option for a 25 year renewal. Together with the AGS and NO&NE, the CNO&TP formed the “Queen and Crescent Route” between Cincinnati and New Orleans.

Construction of the railway started when Ohio River shipping, at the time an important economic engine in Cincinnati, shifted to the railroad industry. Afraid of losing further shipping traffic (including jobs and tax revenue), the City felt the need to remain competitive and developed its own railroad. City voters approved $10 million in municipal bonds in 1869 to commence construction of the line. Originally the line was built to a 5-ft. wide gauge, but was then converted to standard gauge in 1886, a feat that took only 13 hours. The CNO&TP reported 1,688 million ton-miles of revenue freight (not including Harriman & Northeastern) in 1925, on 338 route-miles operated; by 1967 it had 4,116 million ton-miles on 337 route-miles. Revenue passenger-miles were 134 million in 1925 and 15 million in 1967.

The Second District in the CNO&TP’s main line is called the "Rathole division" due the steep grades, 27 tunnels, and number of curves that were once this line's signature. Projects over the last 60 years eliminated many of the problem areas, the Southern Railway's improvement project between 1961 and 1963 saw numerous cuts and line relocations to bypass tunnels to reduce the steep grades and tight curves. Tunnels No. 22 and No. 24 at Nemo, Tennessee and Tunnels No. 25 and No. 26 at Oakdale still remain on the line; all but No. 25 were built brand-new in the 1960s. The Norfolk Southern Railway double tracked the segment south of Somerset, Kentucky, between Tateville and KD Tower (near Greenwood, Kentucky) in the late 1990s. As of 2013, a huge project has been undertaken to double the track from Woods (also known as Somerset), to Grove, slightly north of Burnside. The project will also straighten a curve near the KY 914 bypass overpass, which will allow improved train handling, all this coming after a major move in 2010 that forced most of the Danville, KY train crews to relocate or drive to Burnside, KY, as this is now the new crew change point, replacing Danville KY, and Oakdale TN as crew change locations. The Cincinnati, New Orleans and Texas Pacific is operated by Norfolk Southern and more than 50 trains a day can run on the CNO&TP, the heaviest concentration being between Danville and Harriman, Tennessee. A large part of this freight traffic consists of intermodal and automotive. 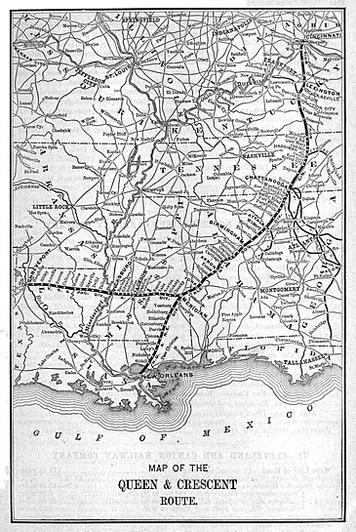 The Queen and Crescent Route, circa 1891. 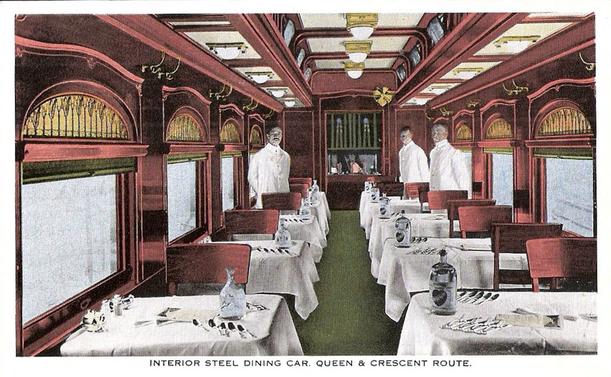 The Queen and Crescent Route was a system of railroads in the Southeastern U.S., connecting Cincinnati (the "Queen City") with New Orleans (the "Crescent City") and Shreveport. The main line to New Orleans was acquired by the Southern Railway, and is still part of the Norfolk Southern Railway system, while the Illinois Central Railroad acquired the branch from Meridian to Shreveport through its subsidiary Yazoo and Mississippi Valley Railroad.