Central New York Railroad
The Central New York Railroad (reporting mark CNYK) is a shortline railroad operating local freight service along ex-Southern Tier Line trackage (ex-Erie Railroad/Erie Lackawanna Railway mainline trackage) in the states of New York and Pennsylvania. The line begins at Port Jervis, following the West Branch Delaware River to Deposit and the Susquehanna River from Lanesboro, where it crosses the Starrucca Viaduct, to Binghamton. It is a subsidiary of the Delaware Otsego Corporation, which also owns the New York, Susquehanna and Western Railway, operator of through trains over the line (along with the Norfolk Southern Railway, lessor).

History
The CNYK began operations on December 12, 1972 between Cassville and Richfield Springs, New York, having purchased the trackage from the Erie Lackawanna Railway (EL). The 21.7-mile (34.9 km) line being operated by the CNYK was opened by the Utica, Chenango and Susquehanna Valley Railway in November 1872 as a branch (the Utica, Chenango and Susquehanna Valley Railway was formed in 1866 and came under the Delaware, Lackawanna and Western Railroad in 1870),

and passed to the EL through consolidation. (EL successor Conrail sold the old Utica, Chenango and Susquehanna Valley main line through Cassville to the New York, Susquehanna and Western Railway in 1982. The CNYK suspended service in early 1988 and was authorized to abandon the line in August 1995, at which time the corporation became inactive. Though the CNYK was inactive from 1988-2004, the CNYK was still in existence. 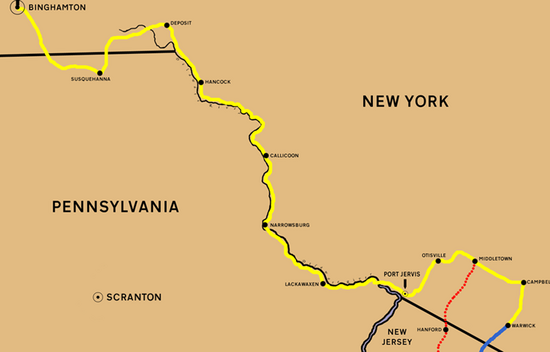 CNYK (Binghamton to Port Jervis) and adjoining portions of the Southern Tier Line.