History
Most of the Pennsylvania extension of the New Jersey Central (CNJ) was built by the founders of the Lehigh Canal and nation's second railroad, the Lehigh Coal & Navigation Company (LC&N) under their subsidiary Lehigh and Susquehanna Railroad (LH&S), with its initial trackage built from near their Delaware Canal connection with the Lehigh Canal at Easton, Pennsylvania alongside the Lehigh to their Mauch Chunk corporate headquarters, the Mauch Chunk & Summit Hill Railway and their Coaling and Canal operations center (now the west bank part of modern Jim Thorpe). They also started slowly building a connecting line southwards from West Pittston and the Duryea yard at the confluence of the Lackawanna and Susquehanna in the greater Wilkes-Barre—Scranton area (the Wyoming Valley) over the ridges to White-Haven at the head of the Lehigh Gorge.

When Lehigh Valley Railroad (LVRR) pushed a line into the Lehigh Valley through (left bank) East Mauch Chunk and (right bank, shared with the LH&S) Packerton, the LC&N management suddenly got motivated to have LH&S finish the connecting road through the Lehigh River Gorge. The LVRR completed its parallel stretch in the same period, creating news media buzz. Despite their experience with the gravity railroad, LC&N management knew they had much to learn about operating the LH&S so looked for an operating company to partner with to operate the line; subsequently, as was common practice for nearly a century with many of the nation's shortline railroads which were built primarily by local business boosters, it was leased to the CNJ in 1871 as their Lehigh and Susquehanna Division.

In the ensuing years, the CNJ would run a prestige express passenger service from New York City and Easton (Philadelphia connection) to Buffalo and points west (Great Lakes region) where they competed with the Lehigh Valley head to head, parallel tracks sometimes on the same bank or often on the opposite shore of the Susquehanna River. 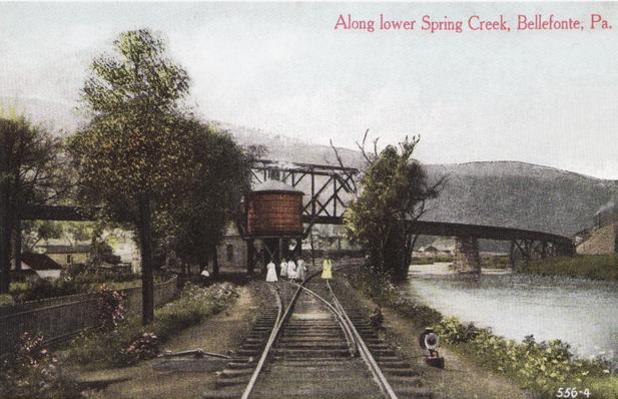 Postcard view of the Central Railroad of Pennsylvania viaduct in Bellefonte, Pennsylvania. The view looks north along the Pennsylvania Railroad Bellefonte Branch tracks passing under the viaduct, with Spring Creek to the right. Viaduct depicted existed between 1899 and 1919.

By the 1940s the CNJ wished to avoid certain New Jersey taxes on its Pennsylvania lines. The Easton and Western Railroad, a short branch west of Easton, was renamed to the Central Railroad of Pennsylvania in 1944 and all Pennsylvania leases, primarily the LH&S, were transferred to it in 1946. The new company began operations August 5, 1946. Around the same time, the CNJ logo was changed from "Central Railroad Company of New Jersey" to "Jersey Central Lines". The arrangement was struck down by the courts and, in 1952, CRP operations were merged back into the CNJ. In 1972, the CNJ's Lehigh and Susquehanna lease expired, and the CNJ's Pennsylvania lines were then operated by the Lehigh Valley Railroad.