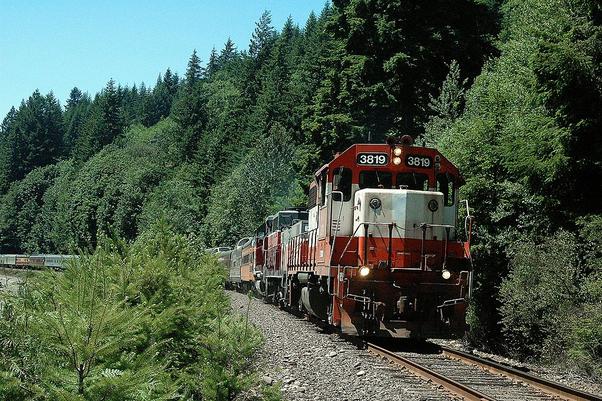 Central Oregon & Pacific GP38 No. 3819 leads the Trains Unlimited Special back to Eugene on the Coos Bay Branch, July 4th, 2005. The location is between Cushman and Mapleton, Oregon.  Photo by Drew Jacksich.  By Drew Jacksich from San Jose, CA, California Republic - Beck to Noti 7-4-05 090x4Uploaded by Mackensen, CC BY 2.0, https://commons.wikimedia.org/w/index.php?curid=31358811 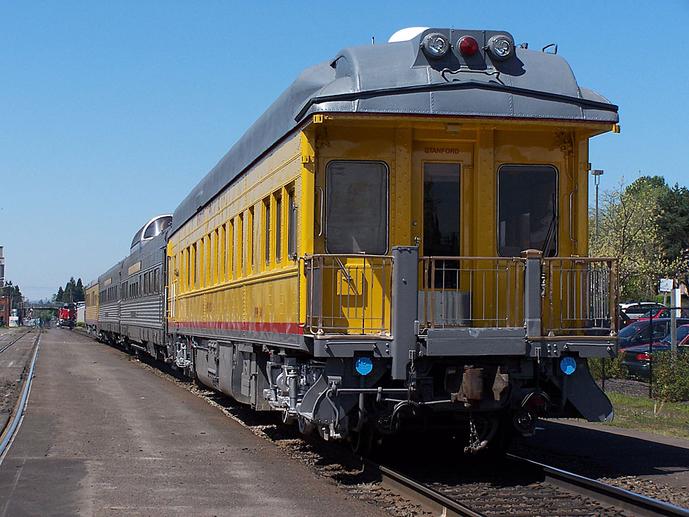 The mainline of the CORP is 305 miles (491 km). Traffic is estimated at 17,000 cars per year, consisting mainly of logs, lumber products, and plywood. CORP is a subsidiary of Genesee & Wyoming, which acquired the railroad as part of its acquisition with RailAmerica in late 2012. Until 2007, CORP also operated the 136-mile (219 km) Coos Bay branch, another line once owned by the SP.

On May 17, 2007, CORP was awarded a Silver E. H. Harriman Award in Group C for the railroad's safety record in 2006. This award marked the first time a RailAmerica-owned railroad has earned a Harriman award.

On 20 March 2008, CORP announced plans to keep its Siskiyou line open between Medford and Weed, and to spend nearly $5 million on improvements to the line.

CORP reopened the 95-mile (153 km) section between Ashland and Weed in November 2015, after repairing rails, ties, and bridges. The project was funded by $7.1 million of Transportation Investment Generating Economic Recovery (TIGER) money, $30,000 combined from Douglas and Jackson counties, and a 25 percent match from CORP.

Coos Bay Line
The Coos Bay Line was completed by the Southern Pacific Railroad and opened for traffic in 1916. Originally, the line went from Eugene to Powers via the communities of Veneta, Noti, Swisshome, Mapleton, Cushman, Canary, Reddsport, Lakeside, Hauser, North Bend, Coos Bay, Coquille and Myrtle Point. According to a timetable dating 1920, four through-passenger trains and a local between North Bend and Myrtle Point made up passenger service in the line. Passenger service ended on 4 June 1953, after many years of only one running passenger train, nicknamed "The Owl". Tracks beyond Coquille was abandoned and subsequently removed in the 1980s. In 1994 SP sold the route to Railtex (later, RailAmerica), which operated it as part of CORP.

On 21 September 2007, CORP elected to shut down most of the Coos Bay branch. The track was closed between Vaughn (west of Noti) and Coquille (south of Coos Bay). This action was taken after it was revealed that the nine aging tunnels on the line required repairs that were internally estimated to cost up to $7 million.

On 23 October 2007, the Port of Coos Bay filed a $15 million lawsuit against CORP, in response to its closing of the Coos Bay Branch. The suit claims that CORP failed to provide the required 180 days' notice that it would shut down a leased spur to the bay's North Spit.

On 21 November 2008, the Surface Transportation Board ordered CORP to sell part of the branch to the Port of Coos Bay for $16.6 million. The 111-mile (179 km) segment links Danebo and Cordes. The price was much less than RailAmerica, CORP's corporate parent, had desired ($25 million), and much closer to what the port had initially offered ($15 million). The Port completed the purchase of the line in 2009 and is currently repairing the tunnels that led to the line's closure. The Port reopened the line in 2011 as Coos Bay Rail Link.

In spring of 2005 the Central Oregon & Pacific Railroad (CORP) ran an inspection train using cars borrowed from the Union Pacific. Afterwards, the cars were parked on the mainline by the Eugene station and were picked up by Amtrak later that day.  By Bruce Fingerhood from Springfield, Oregon, US - corp inspection special, CC BY 2.0, https://commons.wikimedia.org/w/index.php?curid=74479675