The Clinton-Oklahoma-Western Railroad Company of Texas was a 56-mile length of railroad track extending from the Oklahoma state line in eastern Hemphill County, Texas, to Pampa, the county seat of Gray County, located northeast of Amarillo. Chartered in 1927, the COW-T was an extension of another entity, the Clinton and Oklahoma Western Railroad Company, which operated from Clinton, Oklahoma, west to the Hemphill County line near Canadian, Texas. With an initial investment of $100,000, the COW-T business office was located at Wichita Falls, Texas.

The original COW-T board included Joe A. Fell of Vernon, Texas, and nine investors from Wichita Falls, among those the entrepreneur Frank Kell and one of his sons-in-law, Charles Wilbur Cahoon, Jr. (1897–1979), the father of future State Representative Frank Kell Cahoon of Midland. In June 1928, the Atchison, Topeka and Santa Fe Railway acquired the combination Clinton and Oklahoma Western and the COW-T. The link from Hemphill County to Pampa was completed in 1929; two years later an 11-mile segment was added in Gray County from rural Heaton to the since largely abandoned oil camp of Coltexo. Both the COW-T and the Clinton Oklahoma Western were leased in 1931 to the Panhandle and Santa Fe Railway, which thereafter owned the lines from 1948 until their disestablishment in 1965. 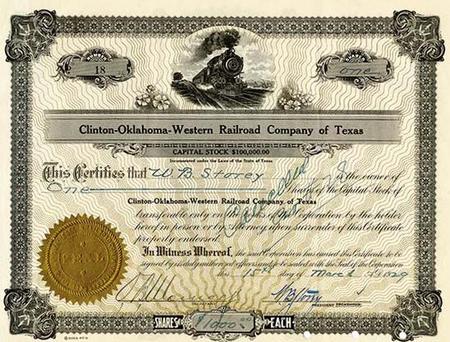