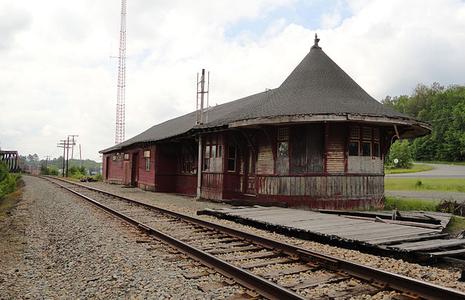 Canadian Pacific Lines in Maine
The Canadian Pacific Lines in Maine were set up as a separate company to comply with ICC regulations and were considered a Class I railroad. In 1950, railroads with operating revenues over $1 million were classified as such. In 1950, the subsidiary’s total freight and passenger operating revenue was $5,076,464.00, down from $5,531,529.00 in 1949. The company operated 234 miles in the State of Maine. Its main route formed the CP line between Montreal, Quebec and St. John, New Brunswick. Part of the through route consisted of trackage rights over the Maine Central Railroad between Mattawamkeag and Vanceboro, Maine.

The Canadian Pacific Railway station in Greenville Junction, Maine was opened in 1889 for the International Railway of Maine. Passenger service ended in 1960s. This view looks southeast towards the trestle and former junction with the Bangor and Aroostook RR (line abandoned 1960s) at Moosehead Lake.

The CP Lines in Maine were a collection of lines purchased or built by the CP prior to 1900. Its through route included trackage rights over a segment of line owned by the Maine Central Railroad, which was later purchased outright by the CP.

Two major components of the route were:

The European and North American Railway, which formed the eastern-most connection from Vanceboro, ME, with St. John, New Brunswick, in the 1850s. The Canadian portion of this line was absorbed by the New Brunswick Railway, which itself was bought by the CP in 1890. The American portion of the line was purchased by the Maine Central Railroad and operated by that company. The CP used their trackage rights over the MEC portion of the route, and purchased the line outright from the MEC in 1974. The non-operating portions of the New Brunswick Railway were sold to businessman K.C. Irving in 1941, who later turned it over to his forest operations subsidiary J.D. Irving Limited. In 1988, citing declining traffic, the CP set up a subsidiary to control its lines east of Montreal, the Canadian Atlantic Railway. Between 1988 and 1993, many CAR lines were abandoned. In 1994, all CAR operations were sold to shortline operators. During this time, some portions of the former New Brunswick Railway were purchased by J.D. Irving Limited, which continues to operate segments as the New Brunswick Southern Railway, the Eastern Maine Railway, and the Maine Northern Railway. Some former NBR trackage in Grand Falls is operated by the Canadian National Railway.

The International Railway of Maine was designed to connect the CP's lines in Canada with the European and North American railhead at Mattawamkeag. The route was purchased by CP subsidiary Atlantic and Northwest in 1886. The CP finished various uncompleted portions of the Montreal-St. John through route and 1889.

In addition to the Montreal-Saint John through route, the Canadian Pacific's lines in Maine also included a branch in the Aroostook River valley from Fort Fairfield, Maine to Presque Isle, Maine (27 miles) where they connected with CP subsidiary Aroostook Valley Railroad and competitor Bangor and Aroostook Railroad, as well as a branch that connected Debec, New Brunswick with Houlton, Maine (8 miles).

In 1950, the freight income of Canadian Pacific Lines in Maine was $4.3 million, with an additional $424,000 in passenger revenue. The operating ratio was 90.1 percent.