History
The CRANDIC began operations in 1904, providing interurban service between Cedar Rapids, Iowa, and Iowa City, Iowa. In 1914, a line extending to Lisbon, Iowa, was completed but was abandoned in 1928. In 1939, the CRANDIC purchased six high-speed lightweight interurban cars (Red Devils) from the recently abandoned Cincinnati and Lake Erie Railroad interurban, leading to the popular saying "Swing and Sway the CRANDIC Way", referring to the motion caused by high-speed running on the CRANDIC's uneven track. In 1953, the railroad ran its last passenger train, a charter by railfans.

While freight was important to the CRANDIC in the early years, it was better known for its passenger interurban operations. After passenger operations were discontinued in 1953, freight became the primary source of traffic for the CRANDIC. At the same time, the electric-powered locomotives were replaced with diesel-electric models. The customer base in Cedar Rapids continued to expand with the population in the area. In 1980, with the demise of the Milwaukee Road, CRANDIC purchased the Cedar Rapids to Homestead, Iowa, portion of the Milwaukee. Also in that year, an Iowa City to Hills, Iowa portion of the former Chicago, Rock Island and Pacific Railroad was acquired by the CRANDIC. In 1996, a large locomotive and car shop was built in the southwest side of Cedar Rapids as a replacement for the original Rockford Road facility.

In late 2004, the CRANDIC chose to concentrate on its major focus, switching customers along its rail lines. A daily road freight between Cedar Rapids and Iowa City previously operated by the CRANDIC was turned over to the Iowa Interstate Railroad in August 2004. In 2005, Railway Age magazine named the CRANDIC its Short Line Railroad of the Year. Also in 2005, CRANDIC opened its third shop complex. The newest shops are located on the site of the original CRANDIC shops. The previous shops complex was sold to Archer Daniels Midland (ADM) for use as a railcar cleaning and repair shop for ADM's large fleet of rolling stock. 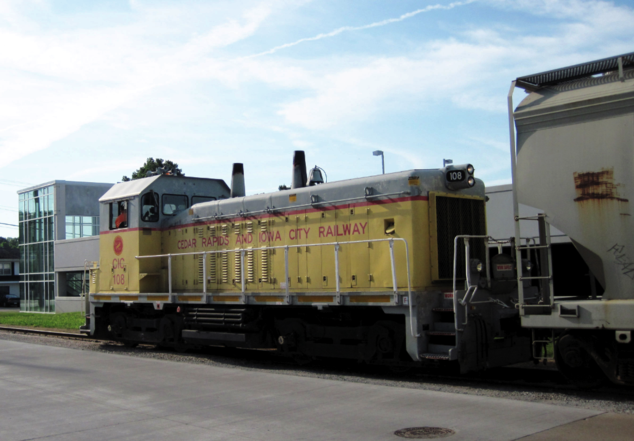