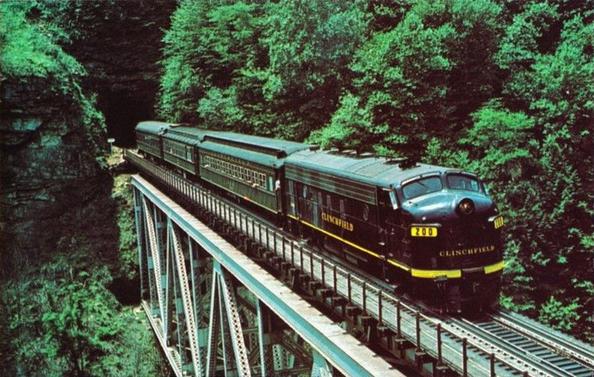 Postcard depiction of Roses Creek on the "Clinchfield Route." 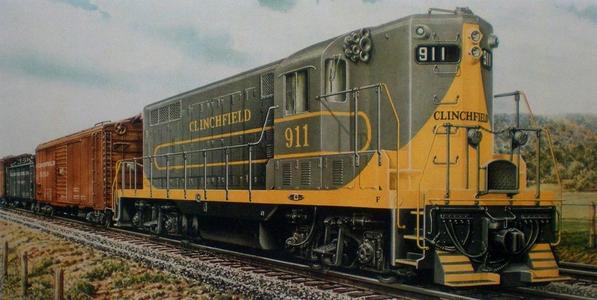 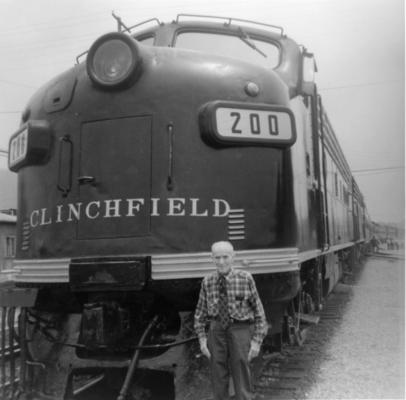 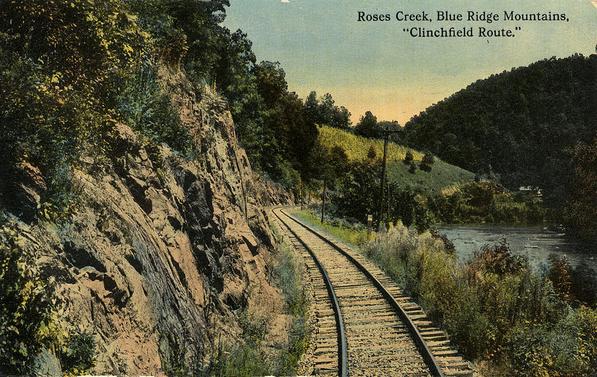 A survivor of the "Glory Days of Steam" - the author: Burt C. Blanton - momentarily delays departure of the Clinchfield Railroad's special excursion train which is standing at the Marion, North Carolina Depot; scheduled to leave at 9:00 am on Sunday morning, June 10, 1979. The train is headed by the Clinchfield's passenger locomotives, No. 200, type FP-7A, and No. 800, type F-7A. The consist was eight cars. The train's route was in a northerly direction from Marion to Erwin, Tennessee - a rail distance of 82.3 miles. The Clinchfield Railroad is a typical mountain line (standard gauge) - 275 miles in length - completed on February 9, 1915, at an average cost of $201,000 per mile. It's rails traverse a portion of the Blue Ridge Mountains and the railroad crosses the Eastern Transcontinental Divide in the Blue Ridge Tunnel which has a length of 1,865 feet. There are 55 tunnels on the route, ranging from 154 to 7,865 feet. This excellent short line railroad extends from the southern terminus, Spartanburg, South Carolina, via Marion, North Carolina to Erwin, Tennessee; and thence to the northern terminus at Elkhorn City, Kentucky.    [Clinchfield's Railroad's Special Excursion train], Photograph, June 10, 1979; (http://texashistory.unt.edu/ark:/67531/metapth28932/ : accessed October 02, 2015), University of North Texas Libraries, The Portal to Texas History, http://texashistory.unt.edu; crediting Museum of the American Railroad, Dallas, Texas.

Postcard depiction of Clinchfield No. 200 leading a fan trip special.

The Clinchfield Railroad
The Clinchfield Railroad (reporting mark CRR) operated the properties of the Carolina, Clinchfield and Ohio Railway (reporting mark CCO). The line ran 317 miles from Elkhorn City, Kentucky, to Spartanburg, North Carolina. A 35-mile segment from Dante, Virginia, to Elkhorn City connected with the C&O and was completed in 1915. The CRR was the last Class I railroad built east of the Rocky Mountains. The original 266-mile railroad accessed many of the scenic wonders of the Appalachians and is best known for the ultra-modern railroad engineering techniques applied during construction. A prime example of this is the Clinchfield Loops that climb the Blue Ridge Mountains in North Carolina.

The CRR began operating the line in December of 1924, however, in October of the same year the line had been leased jointly by the ACL and the Louisville and Nashville Railroad (L&N). At the end of 1925 the railroad operated 309 miles of road and 467 miles of track, by 1970 the mileages were 312 and 501. An ex-Union General named John T. Wilder received a charter for Charleston, Cincinnati and Chicago Railroad, commonly referred to as the "3-C" Railroad, in 1886. This was the forerunner of the modern Clinchfield Railroad. A 625-mile line was proposed from Ironton, Ohio, to Charleston, South Carolina with an extension down the Ohio River to Cincinnati, providing terminals on both the Ohio River and the Atlantic seacoast. The cost was estimated at $21 million. Headquarters for the 3-C railroad was established at Johnson City, Tennessee, and the city soon became a railroad boom town. Constructed from the north and south of Johnson City, tracks reached Erwin, Tennessee in 1890. Grading was nearly complete from Johnson City to Dante, Virginia in 1893 when the 3-C suffered financial difficulties and closed.

​All assets of the 3-C railroad were sold at a foreclosure for $550,000 in July of 1893. The new buyers named the railway the "Ohio River and Charleston Railroad." Construction barely continued at this point and in 1897, the new owners began to sell off the railroad in sections. At the same time, George Lafayette Carter, had developed coal fields in southwest Virginia and was in need of a railway to haul coal to a seaport. In 1902 Carter purchased the Ohio River and Charleston Railroad and renamed it the Clinchfield Railroad. Carter then organized an enormous construction program and between 1905 and 1909 the line was finished from Dante, VA to Spartanburg, South Carolina. Carter received financing and built the road to high standards and Clinchfield has not had to reduce grades, lighten curves, and enlarge tunnels to handle larger equipment as other railroads have had to do. The line crosses a rugged section of the Smokey Mountains and reaches a summit of 2,629 feet. The maximum grade on the line was held to 1.5% and features 55 tunnels with a cumulative length of over ten miles. Carter also established the Clinchfield’s headquarters in Johnson City, TN, but later moved it to Erwin, TN, and Erwin remained Clinchfield's official headquarters from then on. In 1950, the Clinchfield owned 6 passenger locomotives (all steam) and 17 passenger cars. Passenger revenue that year was $23,863, down from $54,729 in 1949.

Sadly, the Clinchfield identity was lost in the mid-1970s when it came under the Family Lines System banner, a common marketing name for Seaboard Coast Line, L&N, and several other smaller railroads. When the L&N merged the Seaboard Coast Line Railroad in January of 1983, and formed the Seaboard System Railroad, the CRR was then merged into the Seaboard. The line is now part of CSX Transportation. The Clinchfield was known for is its famous “Santa Claus Special” train that first ran in 1943 along the Clinchfield's main line between Elkhorn City and Spartanburg, handing out gifts to the kiddies all along the route. Today, the “Santa Train” is operated by CSX Transportation in conjunction with the Kingsport Area Chamber of Commerce.

During the increased war-time traffic of the early 1940s, the Clinchfield Railroad needed more locomotives. They ordered eight single-expansion 4-6-6-4s from the American Locomotive Company and took delivery of them in 1942 and 1943. They were similar to the D&H; Class J "Challengers" built in 1940. These locomotives were designated Class E-1 and were assigned road numbers 650 though 657. They had (4) 22 x 32 cylinders, 69" drivers, a boiler pressure of 265 psi, exerted 101,000 lbs of tractive effort and weighed 607,000 pounds.

After the war in 1947, four more "Challengers" were received from ALCO. This group was designated Class E-2 and given road numbers 660 through 663. These locomotives were very similar to the Class E-1s. There were six other "Challengers" received by the Clinchfield. The D&RGW; did not like the six ALCO built 4-6-6-4s they received through the War Production Board in 1943. They preferred the locomotives they had purchased from the Baldwin Locomotive Works. The D&RGW; sold the six Alco-built "Challengers" to the Clinchfield in 1947. This group was designated Class E-3 and were given road numbers 670 through 675. All 18 of the Clitchfield "Challengers" were scrapped in 1953 and 1954.

In November of 1992, to help the City of Kingsport, TN and CSX celebrate the 50th anniversary of the running of the Santa Train from Elkhorn City, KY to Kingsport, Union Pacific brought their Challenger in, renumbered and relettered it to be Clichfield 676.

Railroads of the U.S.A.​