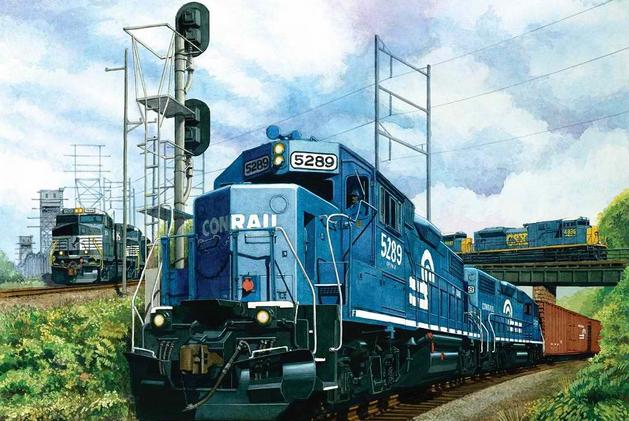 Conrail is a service provider for CSX Corporation and Norfolk Southern Corporation.

Conrail (Shared Assets Operations)
Conrail Shared Assets Operations is the commonly used name for modern-day Conrail (reporting mark CRCX). Conrail is an American railroad company. It operates three networks—the North Jersey, South Jersey/Philadelphia, and Detroit Shared Assets Areas, where it serves as a contract local carrier and switching company for its owners, CSX Transportation and the  Norfolk Southern Railway. When most of the former Conrail's track was split between these two railroads, the three shared assets areas (a total of about 1,200 miles of track) were kept separate to avoid giving one railroad an advantage in those areas. The company operates using its own employees and infrastructure, but owns no equipment outside MOW equipment.

Delair Bridge
The south track at the Delair Lift Bridge (part of the Delair Branch) is used by Conrail; the north track is used by New Jersey Transit's Atlantic City Line.

CP-West Detroit, Delray, CP-YD, and River Rouge Yard lie close to each other on the Utica/MP 20 line, giving the whole a rough K-shape. Various spurs and industrial tracks branch off from this trackage. Mileage in both directions is measured from the Michigan Central Railway Tunnel.