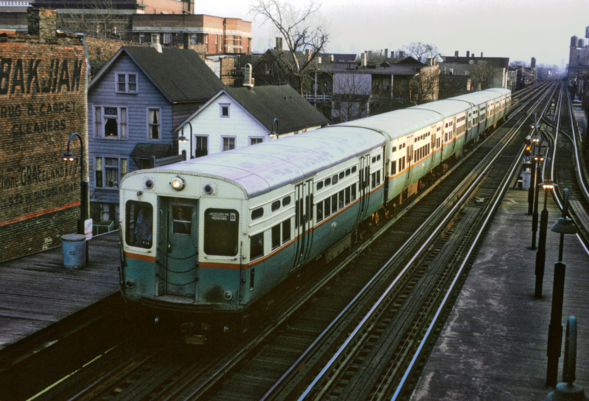 CTA Lake A Train on inner Loop at Randolph and Wells station, Chicago, IL on June 13, 1968.  Photo by Roger Puta. 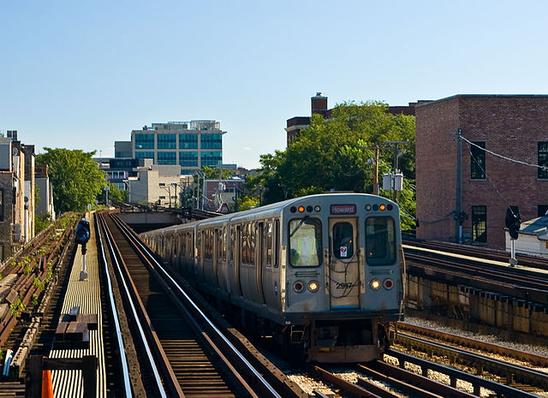 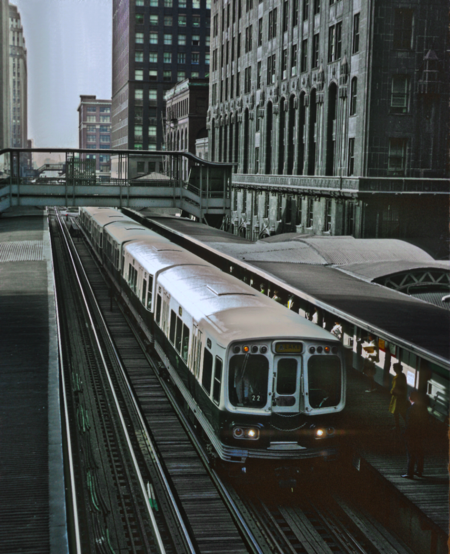 The CTA is an Illinois independent governmental agency that started operations on October 1, 1947 upon the purchase and combination of the transportation assets of the Chicago Rapid Transit Company and the Chicago Surface Lines streetcar system. In 1952, CTA purchased the assets of the Chicago Motor Coach Company, which was under the control of Yellow Cab Company founder John D. Hertz, resulting in a fully unified system. Today, the CTA is one of the three service boards financially supported by the Regional Transportation Authority.

Operations
Annual passenger boardings on CTA buses and trains from 1988 to 2012
The Chicago Transit Authority provides service to Chicago and 40 surrounding suburbs. The CTA provided a total of 532 million rides in 2011, a 3 percent increase over 2010 with ridership rising to levels not seen for 20 years.

CTA operates 24 hours each day and on an average weekday provides 1.7 million rides on buses and trains. It has approximately 1,800 buses that operate over 140 routes traveling along 2,230 route miles (3,658 km). Buses provide about one million passenger trips a day and serve more than 12,000 posted bus stops in 10 suburbs. The Chicago Transit Authority's 1,450 train cars operate over eight routes and 222 miles (357 km) of track. Its trains provide about 750,000 customer trips each weekday and serve 144 stations in Chicago and seven suburbs.

Blue Line terminal in O'Hare International Airport.
Purple Line Central Station, Evanston.
View of the "L" from Adams/Wabash in the Loop.
The junction at the northwest corner of the Loop.

The CTA has many free and discounted fare options, for elementary, middle, and high school students, college and university students, people with disabilities, senior citizens, and military service members.

Cash
Only buses allow riders to pay with cash. The bus fare is $2 (since 1 January 2009), the 'L' fare is $2.25 (Blue Line trains that start at O'Hare is $5), and no cash transfers are available. Previously, some rail station turnstiles accepted cash but this feature has been removed in an effort to speed up boarding, except during sporting events at nearby 'L' stations, such as the Red Line 'L' station at Addison (near Wrigley Field, home of the Chicago Cubs) and the station for the same line at Sox–35th (across the street from U.S. Cellular Field, home of the Chicago White Sox).

Transit Cards
The CTA no longer sells Transit Cards. All remaining Transit Cards must have been used by July 1, 2014. In its place CTA has adopted the Ventra Card system. The Ventra Card can be purchased online, at any Ventra machine at CTA stations, and at authorized retailers.

Ventra
Ventra is an electronic fare payment system for the Chicago Transit Authority and Pace that replaced the Chicago Card and the Transit Card automated fare collection system. Ventra (purportedly Latin for "windy," though the actual Latin word is ventosa) launched in August 2013, with a full system transition slated for July 1, 2014. The Ventra payment system includes several options of payment, including a contactless smart card powered by RFID, a single day or use ticket powered by RFID, any personal bank-issued credit card or debit card that has an RFID chip, and a compatible Mobile phone. Ventra is operated by Cubic Transportation Systems.

Connections - CTA TV show
The Chicago Transit Authority produced a monthly television show, Connections, from May 2003 through December 2011. The show was hosted by Dale Rivera (episodes 1 - 42), Jeanne Sparrow (episodes 43 - 78), and Omar Barragan (episodes 79-92). Connections was broadcast on City of Chicago Public-access television cable TV channels 23 & 49, as well as on Comcast's CN100 in the Chicago media market, including areas of Michigan and Indiana.

Connections featured news and information about the CTA and services it provides. Individual segments from Connections are available on CTA's YouTube channel.

Equipment
As mandated by the Americans with Disabilities Act of 1990 for all transit operators in the U.S., all CTA buses are handicap accessible, and the ramp on every bus is available for use upon request by anyone who has trouble with steps, even temporarily. The majority of train stations CTA operates have elevators or ramps to provide access for customers with disabilities. All trains include accessible rail cars.

CTA provides the means to view alerts regarding elevator status at the CTA's Elevator Status Alerts page or by calling an Elevator Status Hotline at 1-888-YOUR-CTA. Accessibility alert notifications also appear, by default, in CTA "Train Tracker", a station arrival prediction tool appearing on its website.

History
Until 1973, CTA's fleet included a large number of electric trolley buses – or "trolley coaches", as they were commonly known at the time. In the 1950s, the fleet of around 700 trolley coaches was the largest such fleet in the U.S., and represented about one-quarter of CTA's total number of surface-transit vehicles (motor bus, trolley bus and, until 1958, streetcar). Trolley bus service was phased out in the late 1960s and early 1970s, and trolley buses ran for the last time on March 25, 1973.

CTA buses were known as the "green limousine" or the "big green" — buses were one or more shades of green from the CTA's establishment through the end of the 1980s. With the delivery of the TMC RTS buses in 1991, a more patriotic color scheme was adopted, and the green scheme was fully phased out by 1996. A notable color scheme was the "Bicentennial" of about 1974 to 1976.

CTA bought very few buses between the mid-1970s and the end of the 1980s. During this time, purchases were only made in 1979 (20 MAN/AM General articulated buses), 1982-83 (200 Flyer D901 buses and 125 additional MAN articulateds), and 1985 (362 MAN Americana standard-length buses). Another aspect of this period was that with the exception of the 1979 and 1983 MAN orders, none of those buses had air-conditioning, a budget saving move by the CTA. The 1972-76 fleet of GM "New Look" buses, 1870 total, which were originally air-conditioned (although there were problems with the air-conditioning systems, resulting in their eventually being disabled and sliding windows installed in the buses), composed the majority of vehicles in service into the early 1990s.

Today CTA's current fleet of buses is mostly dominated by New Flyer's D40LF, which replaced buses that were built in 1991 and 1995.

The rail orders of the CTA include the last railcar stock built by the Budd Company and rail cars built by Boeing-Vertol and Morrison-Knudsen. The most recent order was from Bombardier.

In 2014, the CTA received their first electric buses from New Flyer, making the CTA the first major U.S. transit agency to use electric buses as part of a regular service.

Active 'L' rolling stock
Ten (10) prototypes of the 5000 series were received in 2009, and entered passenger testing in April 2010, with 396 more ordered once the tests were completed.

Security and safety
After the September 11 attacks, CTA announced its "If you See Something, Say Something" campaign. CTA has also installed a security camera network, and a system to send real time images from cameras in buses directly to emergency responders.

CTA has also been actively prosecuting vandals, announcing on several occasions that felony convictions were obtained against persons who spray painted authority vehicles.

Technology
The CTA has, within the past few years,[when?] installed GPS Bus Tracker systems on all buses. The original claim justifying the addition of this technology was that it would reduce the issue of bunching buses. The system also allows riders to be able to determine the location of buses online.

A report prepared by the CTA claims that there was a decrease in bus bunching from 3.9% to 2.3% from 2007 to 2009, but the report neither demonstrated a direct connection between Bus Tracker and this reduction in bunching, nor did it show whether this was a temporary or permanent phenomenon.

CTA has also made its Bus Tracker and other developer tools available, and is making Bus Tracker arrival data available through text messaging. One of the first applications of the Bus Tracker Developer Tools involved the installation of monitors showing the information in several businesses in Chicago's Wicker Park neighborhood. Using the developer API published by CTA, some augmented CTA bus tracking applications have been developed for mobile phones, and CTA has its own Transit App Center, featuring applications developed by others. CTA also has a train tracker (Beta starting January 2011), and it can also be accessed through a computer, smart phone, or text messaging.

Public art
The CTA is home to a collection of art – including mosaics, sculptures and paintings. More than 50 pieces of art are exhibited at over 40 CTA stations.

According to the CTA's website, the original pieces of artwork contribute to each station’s identity and enhance travel for customers. Art promotes a friendly, inviting atmosphere for these stations, which serve as gateways to the communities they serve.

Many of the pieces are a result of the Arts in Transit Program, which is funded by the Federal Transit Administration and coordinated locally through the City of Chicago’s Office of Tourism and Culture. A number of other pieces were created through the CTA’s Adopt-A-Station program and through partnerships with organizations such as the Chicago Public Art Group.

Arts in Transit
In 2004, the CTA and the City of Chicago Public Art Program installed nine permanent works of art at eight renovated rail stations on what is now known as the Pink Line. The CTA has since created an ongoing program to showcase permanent works of art in conjunction with the City of Chicago Public Art Program. The Arts in Transit Program is funded by the Federal Transit Administration, and created opportunities to develop original artwork for station reconstruction projects along the CTA Red and Brown Lines. Artists were selected for each of the stations included in the Brown Line Capacity Expansion Project and select renovated Red Line stations. By the completion of the Brown Line Capacity Expansion Project in 2010, original artwork was installed in each of the 18 renovated stations along the CTA's Brown Line. By combining the visibility and accessibility of the city's mass transit system with the creativity of Chicago's art resources, this program resulted in a successful public display of professional works of art designed with input from nearby communities. This program provided high-profile locations for public art and server as a gateway to communities served by the CTA stations. Media under consideration included, but were not limited to, mosaics, art glass, ornamental fencing, mixed-media artwork, and freestanding sculpture and furniture. The CTA and the City of Chicago Public Art Program, administered by the Office of Tourism and Culture, encouraged and facilitated collaborations between artists, government agencies, the community and other partners. The City of Chicago Public Art Program accepted qualifications from local and national professional artists or artist teams capable of creating permanent public works of art for the CTA Arts in Transit Program for the renovated stations.

CTA promotes its Public Art with a video and online gallery. 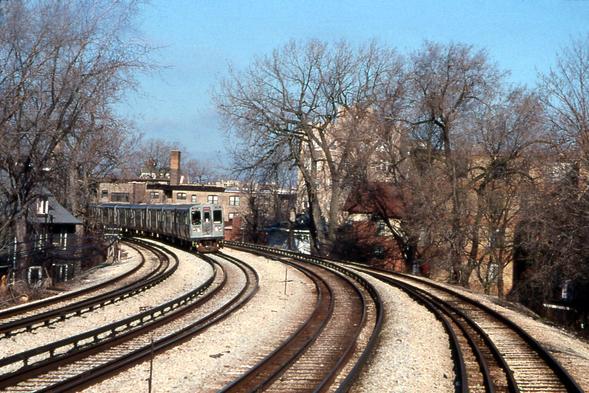 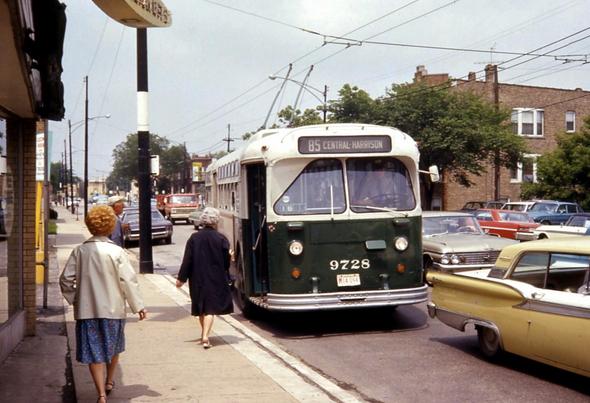 A CTA train emerges from the north portal of the State Street Subway on the Chicago 'L' Red Line.