Central Vermont Railway 4-8-2 at White River Junction (Vt.), after working the morning express from Montreal (Central), which continued to Boston with a B&M Diesel. (This was my only experience in a year in America of being hauled by a steam locomotive. Montreal to Boston took nine hours and this day it was VERY hot - 100 degrees F. here in Vermont. 14 July 1952.    By Brooksbank (Own work) [CC BY-SA 4.0 (http://creativecommons.org/licenses/by-sa/4.0)], via Wikimedia Commons

CN and NECR: 1923-present
On December 12, 1927, the Central Vermont Railway entered receivership again, and was reorganized January 31, 1930, to form a new company of the same name.

Under the Grand Trunk and later the Canadian National, the Central Vermont system saw many of its unprofitable branch lines abandoned. The CN continued to operate the CV as a modestly successful system, however in the process leading up to the privatization of the CN, which took place on November 28, 1995, several non-core routes were identified for sale - one of these being the CV.

On February 3, 1995, the CN sold the CV mainline from New London, Connecticut, to East Alburg, Vermont, to shortline operating company RailTex, which renamed the property New England Central Railroad. RailTex was merged into RailAmerica in 2000. Genesee & Wyoming acquired RailAmerica at the end of 2012. Operations have continued to present as before. 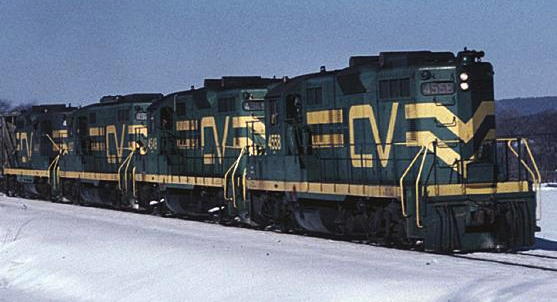 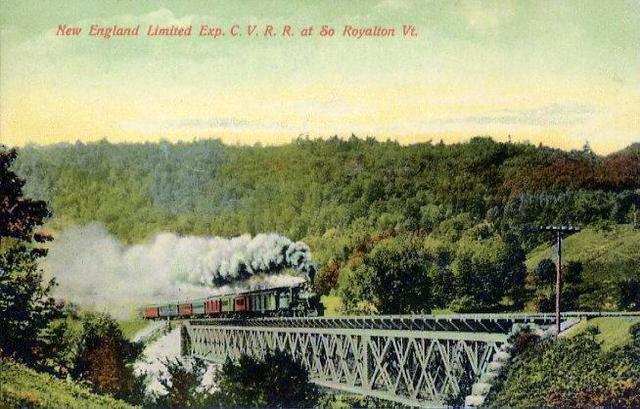 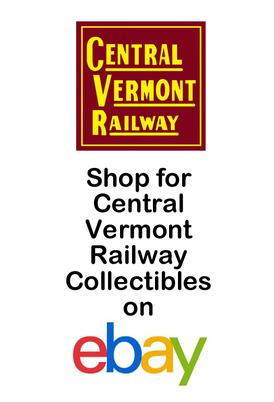 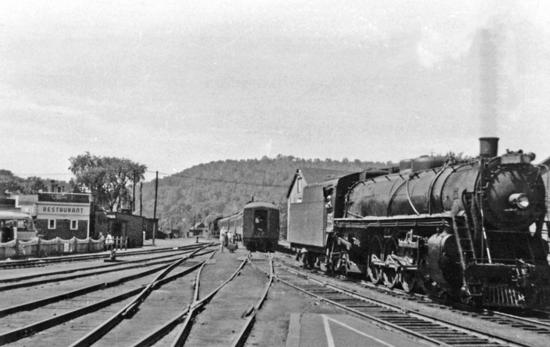 The Sullivan County Railroad continued south from Windsor to Bellows Falls, where it met the Cheshire Railroad towards Boston. At first it was operated by the Central Vermont, but later the Boston and Maine Railroad gained control of it, giving trackage rights to the Central Vermont. Similarly, the Vermont Valley Railroad, running south from Bellows Falls to the New London Northern Railroad in Brattleboro, was originally owned by the Rutland Railroad and later by the B&M.

In 1867 the Vermont Central leased the Stanstead, Shefford and Chambly Railroad, running east from St. Johns to Waterloo. The Waterloo and Magog Railway was later built as an extension from Waterloo south to Magog.

The Vermont Central leased the Ogdensburg and Lake Champlain Railroad on March 1, 1870, extending its line from Rouses Point west to Ogdensburg. On January 1, 1871, the Vermont Central leased the Rutland Railroad system, giving it routes from Burlington to Bellows Falls and Chatham, New York. The New London Northern Railroad was leased on December 1, 1871. On November 2, 1872 the name was changed to the Central Vermont Railroad.

Though chartered as an independent entity in 1867, control of Missisquoi Railroad was gained shortly thereafter, and it was formally leased in July 1873, providing a branch from St. Albans northeast to Richford. It was operated until November 15, 1877, when the Connecticut and Passumpsic Rivers Railroad took it over. The company was reorganized in December 1886 as the Missisquoi Valley Railway, and was once again leased to the Central Vermont.

The Montpelier and White River Railroad opened in 1876 and was leased to the Central Vermont, running from the end of the Montpelier Branch south to and beyond Barre.

The Montreal and Province Line Railway was formed in 1896 as a reorganization of the Montreal, Portland and Boston Railroad. Originally planned as a branch of the Portland and Ogdensburg Railroad to Montreal, and operated by the Connecticut and Passumpsic Rivers Railroad, it was taken over by the Central Vermont upon reorganization. The main line ran from the Grand Trunk Railway's Montreal and Champlain Railroad at Saint-Lambert, across the St. Lawrence River from Montreal, southeast to Farnham on the Stanstead, Shefford and Chambly Railroad, with an extension continuing southeast to Frelighsburg. A branch went east from Mariesville to St. Cesarie.

On July 12, 1920, the entire Grand Trunk system was placed under the control of a "Board of Management" by the federal Department of Railways and Canals in Canada after several years of financial difficulties. After several years of legal battles by Grand Trunk shareholders, intent on preventing the federal government from nationalizing the company, the company was nationalized on January 20, 1923, and fully merged into the Crown corporation Canadian National Railway.

It connected Montreal, Quebec, with New London, Connecticut, using a route along the shores of Lake Champlain, through the Green Mountains and along the Connecticut River valley, as well as Montreal to Boston, Massachusetts, through a connection with the Boston and Maine Railroad at White River Junction, Vermont.

History
The Vermont Central Railroad was chartered October 31, 1843 to build a line across the center of Vermont, running from Burlington on Lake Champlain east to Montpelier, and then southeast and south to Windsor on the Connecticut River. Initial plans had the main line running through Montpelier. However, due to the difficulty of building through the Williamstown Gulf, a narrow valley south of Barre, Vermont, and to land interests of Charles Paine in Northfield, Vermont, a course to the west was selected, leaving the state capital to be serviced by a short branch line. Construction began on December 15, 1845, and the first section, from White River Junction west to Bethel, opened on June 26, 1848. Subsequent sections opened to Roxbury on September 17, 1848, Northfield on October 10, 1848, Montpelier (including the branch from Montpelier Junction) on June 20, 1849, Middlesex on August 30, 1849, Waterbury on September 29, 1849, and the full distance to Burlington on December 31, 1849. The part along the Connecticut River from Hartford south to Windsor opened on February 13, 1849.

The New England Limited Express of the Central Vermont Railway at South Royalton, Vermont; from a 1909 postcard. The train is shown crossing the White River on Bridge No. 20, 600 feet in length, comprising 4 spans of 144 feet, 2 inches each.

Divisions and branches
Richford Branch
This line was formed as the Missisquoi Railroad, then became the Missisquoi Valley Railroad, and then the Missisquoi Valley Division, before gaining its final name. Operations continued on the entire 27.48 mile length until 1984, when a derailment on the bridge spanning the Missisquoi River near Sheldon, Vermont forced the dismantlement of one of three spans. Operations continued on the east end, while the Lamoille Valley Railroad operated on the isolated west end of the line to Richford occasionally after 1989. In 1990 the tracks from St. Albans to the bridge were pulled up.

By Harfang (Own work) [CC BY-SA 3.0 (http://creativecommons.org/licenses/by-sa/3.0)], via Wikimedia Commons 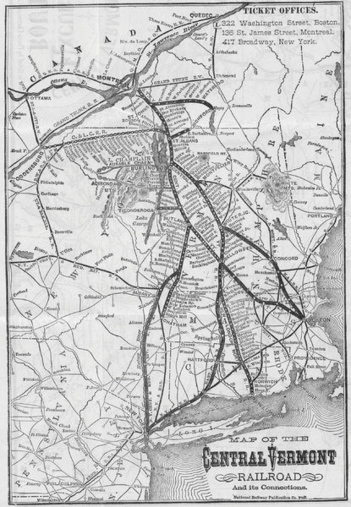