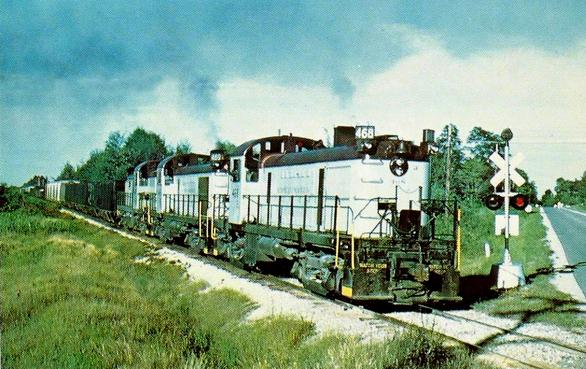 History
The Detroit, Bay City & Alpena Railroad, was a 3 ft 2 in narrow gauge short line operated from Bay City northward to the Lake Huron port of Alpena. The line was converted to 4 ft 8 1⁄2 in standard gauge in 1886 and was reorganized into the Detroit and Mackinac (D&M) on December 17, 1894. During the late 1890s and the first decade of the Twentieth Century, the timber resources of northeastern Michigan were fully utilized and the D&M expanded its trackage northward from Alpena to Cheboygan. The Bay City-Cheboygan main line prospered, and a stone passenger depot was constructed in Harrisville.

The main constituent of the freight service offered by the D&M and its predecessor railroads was timber from the what was then the vast forests of northeastern Michigan; the D&M built spurs and branch lines to the forested areas. Another branch line served the limestone quarries of Rogers City. In 1922, the railroad also had branch lines to Au Gres, Comins, Curran, Hillman, Lincoln, Prescott, and Rose City.

The D&M mainline from Bay City to Alpena offered sleeping car and meal services between Detroit and Alpena in the 1930s. By the 1940s, meal services had disappeared, with sleeping cars and Detroit connections gone by the 1950s. All passenger service was eliminated by 1951.

A Detroit and Mackinac Slideshow.

In March 1976, the Detroit & Mackinac acquired a combination of trackage and operating trackage rights from the remains of the bankrupt Penn Central that created an alternate main line from Bay City northward, through Gaylord and Cheboygan, to Mackinaw City. However, adverse economic conditions continued to affect railroad operations in the northeastern United States. The road was sold to the Lake State Railway in 1992, and ended its existence as an independent railroad.

The Detroit & Mackinac called itself the "Turtle Line" and its logo symbol was "Mackinac Mac". The railroad bore the hostile backronym of "Defeated & Maltreated".

Legacy
The Lake State Railway continued as of 2012 to use traditional handheld technology (picks, shovels, hammers) to replace railroad ties and make other roadbed repairs on surviving trackage that had previously been part of the Detroit and Mackinac system.

A collection of D&M artifacts, including a 1920s switching engine, are housed at the depot in Lincoln, Michigan. The stone depot in Standish, Michigan is also a museum, with rolling stock. The railroad's GE 44-ton locomotive, No. 10, has been preserved by the Southern Michigan Railroad Society. 0-6-0 Locomotive #8 (Baldwin Locomotive Works #41228) is Preserved and awaiting restoration in storage at The Henry Ford (Greenfield Village) in Dearborn, Michigan.