Dieselization and Post-war Growth
After World War II, the DM&IR hauled increasing tonnage to the ore docks along Lake Superior reaching a record of over 49 million tons in 1953. That year the first diesel locomotives, EMD SW9s, arrived on the railway. In 1954, a set of Baldwin DR-4-4-1500 "Sharknose" diesels arrived from the Elgin, Joliet and Eastern (a fellow U.S. Steel railroad), though they were returned to Baldwin Locomotive Works when the EJ&E contract expired in 1955. Dieselization continued with the purchase of several EMD SD9 road switchers the following year, while the last revenue steam run occurred in 1960. Passenger service on the Missabe division ended in 1957 and completely ceased in 1961.

The availability of high-quality iron ore was becoming limited; mines and pits were closing across Minnesota's iron ranges. The DM&IR's ore docks in Two Harbors closed in 1963 and did not reopen until 1966. The Missabe Road was saved by the passage on November 3, 1963, of the Taconite Amendment to the Minnesota State Constitution. (The amendment restricted the state's ability to tax a taconite industry for twenty-five years.) The passage of the amendment accelerated the creation of the taconite mining industry in Northern Minnesota. The Eveleth Taconite Company was formed in 1964 and on April 8, 1966, the SS Edmund Fitzgerald took on the first load of Eveleth taconite pellets, about 23,000 tons. The taconite era on the Missabe had begun.

Ownership and CN Merger
In 1988, U.S. Steel, now USX, spun off the DM&IR and their other ore railroads and shipping companies into the subsidiary Transtar, then sold majority control to the Blackstone Group and USX. In 2001, the DM&IR and other holdings were spun off from Transtar into the company Great Lakes Transportation (GLT) which was fully owned by the Blackstone Group. For the first time in over 100 years DM&IR was no longer associated with U.S. Steel. In late 2003, the Blackstone Group agreed to sell GLT to Canadian National Railway and the purchase was finalized on May 10, 2004.

Merger with Wisconsin Central
In December 2011, the Duluth, Missabe & Iron Range Railway was merged into Wisconsin Central Ltd., which is also controlled by Canadian National Railway. This merger was intended to increase efficiency. 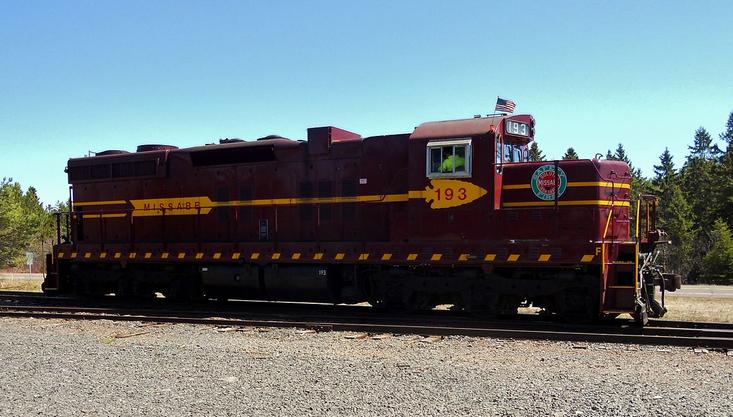 Map of the Duluth, Missabe and Iron Range Railway. Solid lines are tracks still in use; dotted lines are abandoned. The section from Two Harbors to Duluth is effectively operated by the North Shore Scenic Railroad although the DMIR (now CN) retain the exclusive right (unexercised) to operate freight traffic.  By Elkman at English Wikipedia, CC BY-SA 3.0, https://commons.wikimedia.org/w/index.php?curid=5614135 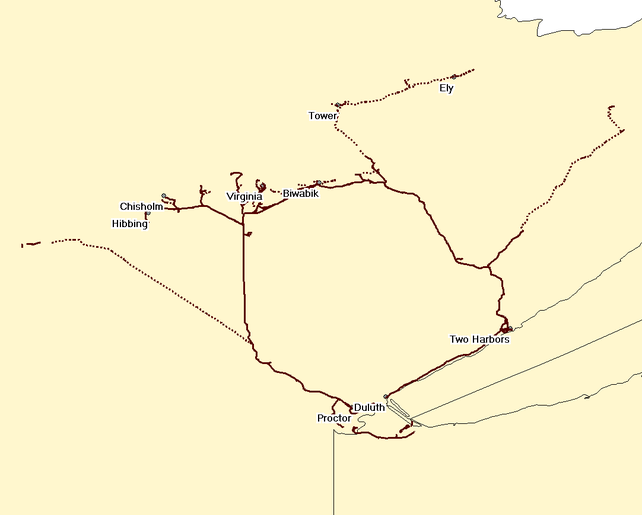 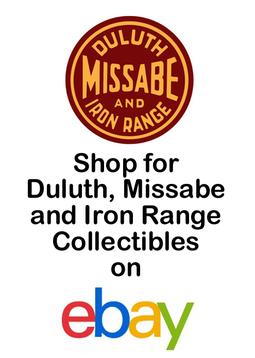 Duluth, Missabe and Iron Range Railway
The Duluth, Missabe and Iron Range Railway (DM&IR) (reporting mark DMIR) is a former Class I railroad operating in northern Minnesota and Wisconsin that hauls iron ore and later taconite to the Great Lakes ports of Duluth and Two Harbors, Minnesota. Control of the railway was acquired on May 10, 2004, by the Canadian National Railway (CN) when it purchased the assets of Great Lakes Transportation. The railway's headquarters are in Proctor, Minnesota.

History
The DM&IR was formed by the merger in 1937 of the Duluth, Missabe and Northern Railway (DM&N) and the Spirit Lake Transfer Railway; the Duluth and Iron Range Rail Road (D&IR) and Interstate Transfer Railway were added in 1938. All of these had been leased by the DM&N since 1930.

The DM&N was incorporated in 1891 and the first load of iron ore was shipped to Superior, Wisconsin, in October, 1892. (The formation of the railway was necessary after the discovery of high-grade Mesabi iron ore near Mountain Iron, Minnesota by the Seven Iron Men. The D&IR was approached to construct a new branch line, but was not receptive.) The Merritt's expanded DM&N by laying track to Duluth, Minnesota, in 1893 and built an ore dock there. The Merritt's shaky financial position, caused in part by building the Duluth expansion, allowed John D. Rockefeller to gain control of the railway in 1894. In 1901, Rockefeller sold the DM&N to USS.