The Canadian Pacific Railway (CPR), transcontinental line, took control of the Duluth, South Shore & Atlantic in 1888. In 1892-94, CPR funds financed the construction of the DSS&A westward from the Keweenaw Peninsula to Duluth.

During the 1890s, the timber industry reached the peak of its operations on the Lake Superior shoreline properties adjacent to the DSS&A's new main line, with irreplaceable old-growth white pines falling to the saws and axes of the lumber industry. After white pines were exhausted, local cutters began to turn to high-quality hardwoods such as sugar maple, and then to pulpwood such as paper birch and aspen.

At the height of the railroad's operations in 1911, the DSS&A operated 623 miles of track, of which 517 miles were main line and 106 miles were branch lines and trackage rights. The railroad operated 3,121 pieces of rolling stock, including 82 locomotives, 67 passenger cars, 35 cabooses, and 2,957 freight cars.

In 1913 the DSS&A's freight operations peaked at almost 1 million short tons, of which more than half were forest products. In the late 1910s, timber yields began to decline all over the Upper Peninsula. This was a blow from which the DSS&A could not recover as an independent operation. Thus, from 1920 on the DSS&A, along with the American railway industry as a whole, were faced with negative factors intensified by unfavorable local business conditions in northern Michigan.

In 1957, the State of Michigan opened the Mackinac Bridge, a 5-mile long suspension bridge carrying an all-weather hard road across the Straits of Mackinac into the Upper Peninsula. The DSS&A responded by ending its remaining passenger rail service in January 1958. In 1961, its Canadian owners merged it with the Minneapolis, St. Paul and Sault Ste. Marie, and the DSS&A became part of the Soo Line.

Nicknames and challenges
The DSS&A's own "official" nickname for itself was "South Shore", referring to the railroad line's route along the south shore of Lake Superior.

The DSS&A's thinly settled service area made it difficult for the railroad to raise adequate revenue to maintain its trackage in good condition, especially in winter. The region served by the railroad receives more snowfall in one year than other sections of the United States east of the Rockies receive in several years combined. From 1957 through 2005, the average snowfall on the Keweenaw Peninsula has been 241 inches per year. Every winter, the DSS&A had to plow this snow off its tracks. 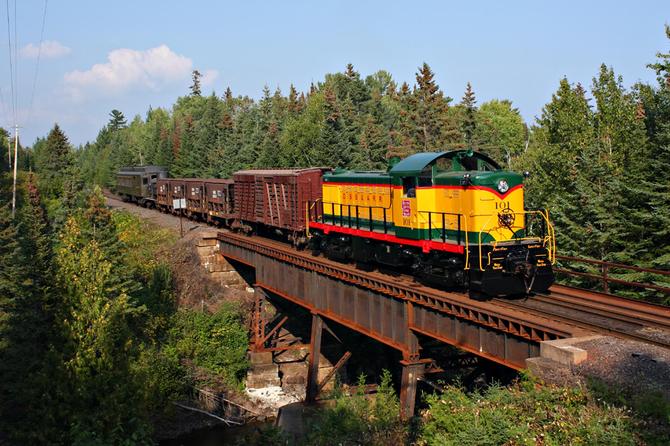 Duluth, South Shore and Atlantic Railway
The Duluth, South Shore and Atlantic Railway (DSS&A) (reporting mark DSA) was an American Class I railroad serving the Upper Peninsula of Michigan and the Lake Superior shoreline of Wisconsin from 1855 until 1960. It provided service from Sault Ste. Marie, Michigan, and St. Ignace, Michigan, westward through Marquette, Michigan to Superior, Wisconsin, and Duluth, Minnesota. A branchline stretched northward from Nestoria, Michigan up to the Keweenaw Peninsula and terminating at Houghton, Michigan, with two branches extending further to Calumet, Michigan and Lake Linden, Michigan. The company was headquartered in Marquette, Michigan.

The first predecessor of the DSS&A began operations in 1855. The railroad fell under the control of the Canadian Pacific Railway (CPR) in 1888, and was operated from 1888 until 1960 as an independently operated subsidiary of the CPR. In 1949, a reorganization of the DSS&A took place, creating new heralds and designating the company a railroad instead of a railway. In 1961, the DSS&A was folded into the CPR-controlled Soo Line Railroad. Since 2001, the remaining operating trackage of the former DSS&A has been operated by the Canadian National Railway (CN). The original DSS&A trackage still operated is now limited to the areas between Trout Lake and Munising Junction, Ishpeming and Baraga, and White Pine and Marengo Junction.

Independent Railroad
The development in the 1850s of hematite iron ore mines in the Upper Peninsula hills above Marquette encouraged the development of numerous railroad plans for spur lines and connecting routes between mines, local boom towns, and the shores of the Great Lakes. While most of the Upper Peninsula's iron ore and Keweenaw copper was shipped to the rest of the United States by lake boat, the inability of water-based shippers to offer service to northern Michigan in winter encouraged railroad promoters to launch numerous plans for lines in the Upper Peninsula.

By the 1870s, a maze of corporate charters and tiny stub lines had been created or built in the central Upper Peninsula, primarily to carry iron or copper ore from the mines down to smelters and docks on the shores of Lake Superior and Lake Michigan. In 1879-81, venture capitalists led the construction of the Detroit, Mackinac & Marquette (DM&M), a standard-gauge main line from St. Ignace, on the Straits of Mackinac, to Marquette on Lake Superior. The roadbed included a surveyor-straight 25-mile east-west section, the ancestor of today's “Seney stretch”. Although the state of Michigan granted the DM&M more than 1.3 million acres of state land, almost 9,000 acres-per-mile  as a construction subsidy, by 1886 the new DM&M went into receivership.

The DM&M was reorganized by venture capitalist James McMillan of Detroit, who led the rapid consolidation of the DM&M and many of the UP's smaller railroads during the early 1880s. The new Duluth, South Shore & Atlantic went into operation as a merger of these lines in December 1886.