2-8-0 No. 116 had raised initials on the tender and metal numbers on the dome and cab, typical of DT&I locomotives of the era.

The line went bankrupt in 1908, but remained solvent until it was purchased by Henry Ford in 1920. Ford recognized the strategic importance of the line to his automobile business as the line left Dearborn, Michigan and connected with all of the major east-west rail lines in the Midwest. This gave Ford direct control over shipments of raw materials and finished goods to and from his factories in Dearborn. The line thrived and saw numerous improvements under Ford's management. However, Ford sold the line in 1929 to the Pennsylvania Railroad after becoming disgusted with interference and over regulation from the Interstate Commerce Commission.

Ann Arbor Railroad
In June 1905, the Detroit, Toledo & Ironton Railway (DT&I) took control of the Ann Arbor Railroad (AA), which they purchased from Rudolph Kleybolte & Co. The AA connected Toledo with Frankfort, Mich., and the acquisition essentially doubled the DT&I system. DT&I only controlled the AA until 1908 when another bankruptcy forced the DT&I to divest its acquisition.

In 1963, the DT&I, itself by then a subsidiary of the Pennsylvania Railroad, once again gained control of the AA. The Ann Arbor lines would later become part of the formation of Conrail in April 1976 but were still facing abandonment. They were purchased by the state of Michigan in October 1977 with the intent of preserving rail service over its tracks. Subsequently, the state divested itself of the lines and remnants of the AA are now owned and operated by several short line railroad companies (including one with the same name as the original).

The Pennsylvania Years
The line operated as an independent subsidiary of the Pennsylvania Railroad from 1929 until 1970. In 1955, the line replaced its steam locomotives with diesel locomotives. It did however, have a short-lived operation using heavy-electric boxcab locomotives. The catenary masts of which survived for decades after de-electrification, as it was deemed too expensive to demolish them. The DT&I relied exclusively on diesel locomotives built by General Motors Electro-Motive Division. The new diesel locomotives were painted bright orange throughout this period, though the specific design and placement of the railroad's logo varied with time. 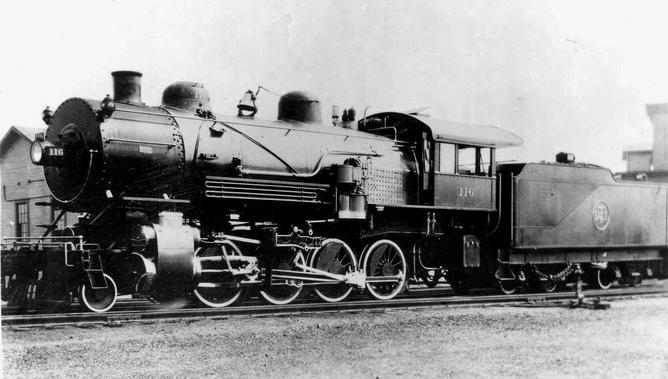 A Detroit, Toledo and Ironton Slideshow.

In 1968, the DT&I's parent company, the Pennsylvania Railroad, merged with its longtime rival, the New York Central Railroad, to become the Penn Central, which declared bankruptcy two years later and sold off the DT&I to private investors. In 1980, the DT&I was acquired by the Grand Trunk Western Railroad (GTW). Under the GTW, the DT&I locomotives were painted in the red and blue livery of the GTW, but retained the DT&I logo. In December 1983, the DT&I was completely assimilated into the GTW.

End of Service on Southern Portion
In April 1982 a collapse in Royersville Tunnel (the only tunnel on the old DT&I) prompted GTW to shut down the line between Jackson and Ironton. The tunnel had suffered collapses many times in the past but limited remaining business south of Jackson and the operational problems of the tunnel led to GTW's decision. At the same time, GTW bypassed the steep and treacherous Summithill section between Bainbridge and Waverly by rerouting trains onto Chessie System trackage from Washington Court House, Ohio to Waverly, then back onto the former DT&I to Jackson. In 1984 all operations south of Washington Court House were suspended, the Jackson Shops closed, and the track dismantled.

A short section of the DT&I main west out of Jackson is still in place serving as a connection from industries to the only remaining line into Jackson. A short section of the DT&I north from the junction with the B&O Southwestern near Greenfield is still in place to serve local industry. Portions of the line between Greenfield and Washington Court House were purchased by Washington Court House with the intention of creating a rail-trail, but they were unable to acquire enough conjoined sections to build a trail.

Central and Northern Portions
GTW continued to operate the northern and central portions of the former DT&I as part of their network for many years. The DT&I trackage from Springfield to Lurray (near Washington Court House) was sold by GTW to the West Central Ohio Port Authority (formerly Clark County - Fayette County Port Authority) January 18, 1991. This section was then operated in conjunction with the former section of the B&O Toledo Division from Lurray to Washington Court House by the Indiana and Ohio Railway, a division of Railtex. In 1997, GTW sold the former DT&I from Dundee (Diann) Michigan to Springfield, Ohio to the Indiana and Ohio Railway. Included in the sale was trackage rights from Dundee to Flat Rock, MI over the old DT&I. Railtex was merged into RailAmerica, which was then purchased by Genesee & Wyoming. G&W operates the former DT&I from Dundee (Diann) Michigan to Washington Court House, still as part of their Indiana and Ohio Railway.