A Duluth, Winnipeg and Pacific Slideshow.

Duluth, Winnipeg and Pacific Railway
The Duluth, Winnipeg and Pacific Railway (reporting mark DWP) is a subsidiary railroad of Canadian National Railway (CN) operating in northern Minnesota. A CN system-wide rebranding beginning in 1995 has seen the DWP logo and name largely replaced by its parent company. The DWP line is CN's connection between International Falls and Duluth, Minnesota, where the railroad connects to a short stretch of the former Duluth, Missabe and Iron Range Railway before following the former Wisconsin Central (both now wholly owned by CN) to Chicago, Illinois.

In 1970 DW&P reported 792 million ton-miles of revenue freight and no passenger miles; at the end of that year it operated 170 miles of road and 232 miles of track. The DW&P's headquarters are in Duluth, Minnesota.

History
The Duluth, Virginia and Rainy Lake Railway (DV&RL) started construction at Virginia, Minnesota in 1901, with the line extending north to Sand Lake, Minnesota when the company was purchased by the Canadian Northern Railway (CNoR) who renamed it the Duluth, Rainy Lake and Winnipeg Railway (DRL&W).

Construction continued through 1908 to extend the line north to Ranier, Minnesota where the DW&P bridged the Rainy River on the Canada–United States border to cross into Fort Frances, Ontario and an interchange with the CNoR mainline between Winnipeg, Manitoba and Port Arthur, (Thunder Bay) Ontario.

In 1909, CNoR incorporated the Duluth, Winnipeg and Pacific Railway, and construction started to achieve access south from Virginia, Minnesota to Duluth, Minnesota. Duluth was reached in 1912, providing interchange with several US railways.

Following the bankruptcy of the CNoR system and its subsequent nationalization by Canada's federal government under the Canadian National Railways (CNR), the DW&P was maintained as an important connection for CNR to the upper mid-western states. 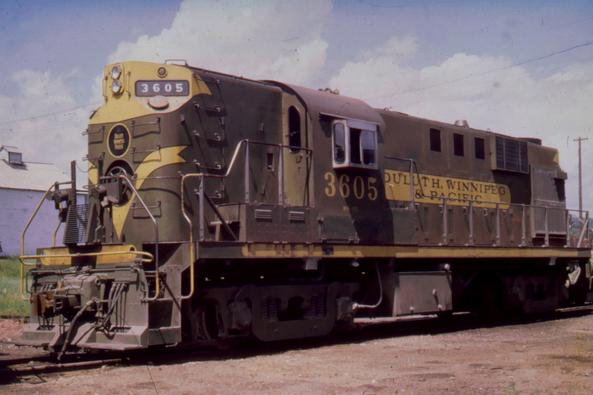 During the post-war era, the DW&P line was upgraded to handle an increase in freight and unit train traffic, such as potash, lumber and paper. In 1960 CNR changed its name to "Canadian National/Canadien National" (CN) and introduced a radical new paint scheme and logo. At the same time, DW&P was changed to just DWP and given a logo of similar flowing design to the CN "noodle". CN's other US subsidiary, Grand Trunk Western Railroad also underwent a similar name/acronym change to Grand Trunk Western (GT).

DWP began to play an increasingly important role for CN in the 1990s, following the implementation of the Canada-US Free Trade Agreement (FTA), and later the North American Free Trade Agreement (NAFTA), which contributed to increases in Canadian exports south and US imports north. The DWP provided the most direct connection from CN's western Canadian trackage to the major US interchanges at Chicago, Illinois, however unlike rival Canadian Pacific Railway which had its own Soo Line Railroad subsidiary trackage to use, CN was forced to interchange with US railroads at Duluth, such as Great Northern (later Burlington Northern Railroad, later Burlington Northern and Santa Fe Railway) or Wisconsin Central Ltd.. In the mid-1990s, CN and WC entered into a formal agreement whereby WC agreed to haul CN trains to Chicago.

The mid-1990s also saw a major change in how US subsidiaries like DWP and GT fit into CN's corporate structure whereby in 1993-1994, CN changed the name of its entire system to "CN North America" (CNNA) and began a major locomotive and freight car repainting program which saw the GT and DWP logos and names disappear, with only the holding company "Grand Trunk Corporation" remaining on paper and legal documents. In 1995, the CNNA experiment ended and the name "Canadian National/Canadien National" with the CN acronym returned, only system-wide in both countries. On November 28, 1995 Canada's federal government privatized CN and its US subsidiaries.

In 2001, CN entered into an agreement to purchase WC entirely on October 21 of that year, providing CN with an "iron lariat" encircling the industrially-important Great Lakes Basin. The only gap in CN's Winnipeg-Fort Frances/International Falls-Chicago mainline route was a short 11 mile (17 km) section in Duluth where CN had to operate on the Duluth, Missabe and Iron Range Railway to reach WC trackage from the end of DWP trackage. On May 10, 2004, CN purchased DMIR's parent company Great Lakes Transportation to give total control of the Winnipeg-Chicago corridor and remove the gap at Duluth between DWP and WC trackage.

Merger with Wisconsin Central
In December 2011, the Duluth, Winnipeg and Pacific Railway was merged into Wisconsin Central Ltd., which is also controlled by Canadian National Railway. This merger was intended to increase efficiency.