History
The East Broad Top Railroad and Coal Company was chartered in 1856. Due to financial constraints and the American Civil War, the railroad was not built by its original charterers, but a new group of investors began to acquire right-of-way in 1867 and was able to construct the railroad as a 3 ft (914 mm) narrow gauge line in 1872–1874. Service began from Mount Union, Pennsylvania to Orbisonia, Pennsylvania in August, 1873, and to Robertsdale in November, 1874. The line later was extended to Woodvale and Alvan, with several short branches. At its height, it had over 60 miles of track and approximately 33 miles of main line.

The primary purpose of the railroad was to haul semi-bituminous coal from the mines on the east side of the remote Broad Top Mountain plateau to the Pennsylvania Railroad in Mount Union. The railroad also carried substantial amounts of ganister rock, lumber and passengers with some agricultural goods, concrete, road tar and general freight. In its first three decades the railroad supplied much of its coal to the Rockhill Iron Furnace, operated by the railroad's sister company, the Rockhill Iron and Coal Company, and in turn hauled the pig iron from the furnace.

As the iron industry in the region faded in the early 1900s, the railroad came to subsist on coal traffic for about 90% of its revenue. Large plants for the manufacture of silica brick were developed at Mount Union around the turn of the 20th century, and these became major customers for coal and also for ganister rock, which was quarried at multiple points along the railroad.

The EBT was generally profitable from the 1880s through the 1940s and was able to modernize its infrastructure far more than other narrow gauge railroads. The railroad's roundhouse, one of the oldest railroad roundhouses in the US still in operation, was built in 1882. A coal cleaning plant and a full maintenance shops complex were also built, bridges were upgraded from iron and wood to steel and concrete, wood rolling stock was replaced by steel, and modern high-powered steam locomotives were bought from the Baldwin Locomotive Works of Philadelphia.

In the 1950s, coal demand plummeted as homes and industries switched to less-expensive oil and gas. The railroad's business declined sharply when the silica brick plants in Mount Union converted to oil and gas and not enough coal could be sold to support the mines and the railroad. The railroad closed as a coal hauler April 14, 1956, and along with the coal-mining company, was sold for scrap to the Kovalchick Salvage Corporation.

Nick Kovalchick, president of Kovalchick Salvage, elected not to scrap the railroad right away, instead letting it sit in place. In 1960, the twin boroughs of Orbisonia and Rockhill Furnace—the latter being the operating hub for the railroad—celebrated their Bicentennial and asked Kovalchick to put a train out for display. Doing them one better, he rehabilitated four miles of track and two locomotives and operated tourist train rides for several months that summer. The new attraction was so successful that the ride, extended to five miles (8 km), opened as a regular tourist operation in 1961. The railroad operated tourist trains every summer through 2011, after which operations were suspended.

The EBT was designated a National Historic Landmark in 1964 and added to the National Register of Historic Places in 1966. The railroad was added in 1996 to the National Trust for Historic Preservation's list of America's Most Endangered Places.

The majority of the railroad is still owned by Kovalchick Salvage and was for years overseen by Nick's son, Joe, and his wife, Judy. From May 2009 until April 2011, the EBT was leased for three years to the East Broad Top Railroad Preservation Association, a non-profit founded with the intention of acquiring the railroad and reactivating all 33 miles (53 km) of the railroad's original main line (only 5 miles (8.0 km) operated for tourist operations). The EBTPA made a number of improvements on site as well as adding numerous special events and in 2011 extended the season and operating days of the week. Maintenance standards and customer service were enhanced. The original three-year lease expired in April 2012 and the owners and the EBTPA were unable to reach an agreement for operations in 2012. The railroad has not operated public excursions since December 2011, however the EBTPA has purchased parts of the railroad and plans to resume operations once its purchase of the railroad is complete.

When running, the line operates as a heritage railway, with trains pulled by 3 ft narrow gauge 2-8-2 steam locomotives. Vintage diesels operate as backup power. Until 2010 excursions ran June through October, weekends only. In 2011, excursions ran on weekends May 7 through October 30 and Thursday and Friday July 7 through August 12 and October. During special events and holidays trains run other days of the week as well as into November and December.

The rides are 10-mile (16 km) round trips and take about an hour. The annual Fall Spectacular, when all operating equipment is in use, is the best weekend to attend. The Spectacular is held on the Saturday and Sunday of Columbus Day weekend in October. There are also special events at Community Appreciation Day in early August and the June Opening on the first full weekend of June (this event did not occur in 2011 as the railroad opening earlier). The train stops at Colgate Grove, a picnic grove at the far end of the operable excursion trackage. The train is turned on a wye for the return trip. The historic railroad maintenance shops are usually open for tours when trains are running, and for group tours by arrangement. Many weekends speeder, handcar and M-3 rides are available on the restored trackage south of Rockhill Furnace. The railroad operates excursion trains on a seasonal schedule. The railroad has not operated public excursions since December 2011, but a private trains for FEBT members did operate on Columbus Day Weekend in October during 2012 and 2013. EBT and FEBT owned motorcars operated excursions for FEBT members during Columbus Day Weekend 2014.

As of 2013 the railway is not operating public excursions, although the East Broad Top Preservation Association has raised $2 million of the $8 million needed to acquire the historic line, allowing the purchase of segments of the line. EBTPA is attempting to raise the rest of the money by the end of 2013 and the Friends of the East Broad Top have continued restoration work.

Present day
The operating lease of East Broad Top Railroad by the East Broad Top Railroad Preservation Association ended in April 2012. Negotiations between the parties continued into May 2012 but an operating agreement acceptable to both parties could not be reached. In part due to the late date and likely due to other factors it was decided not to operate the EBT in 2012, 13 or 14. The railroad facilities are currently maintained by a skeleton paid staff and FEBT volunteers. The EBTPA no longer has any involvement with on site activities at the EBT but continues to hold a purchase option for the railroad and is continuing to pursue funding for purchase. FRA inspections and paperwork were being kept up during 2012 on Locomotive No. 15 in case re-operation occurs. Although no public excursions were held in 2012 or 2013, diesel powered trains operated October 6, 2012 and October 12, 2013 for members of the FEBT. Motorcar excursions were operated October 11, 2014 for members of the FEBT.

The Friends of the East Broad Top restoration program continued in 2012, 13, 14 and 15 without abatement and with the active encouragement of owner Joe Kovalchick. Mr Kovalchick in part funded the structural repairs of the Blacksmith Shop, with the remainder of the repairs funded by FEBT and executed by FEBT volunteers. Restoration of Combine Car No. 14, the Boiler House, the Locomotive Shop and other facilities also continues.

Tours of the Historic Shops complex were offered in 2012 and 2013 for groups of 20 or more by prior arrangement with the railroad. Public tours were offered in August 2012 and October 6, 2012.

The neighboring Rockhill Trolley Museum continues to operate its regular summer schedule and special events during 2012, 13, 14 and, as well as their portion of the Fall Spectaculars in October.

Notability
The EBT is unusual in that it is a complete, original railroad rather than a collection of pieces from various locations, as most tourist railroads are. All six of the 3 ft narrow gauge steam locomotives that operated on the railroad in its last years as a coal hauler are still on site, and some are used for the excursion trains. Other original equipment includes a 4 ft 8 1⁄2 in (1,435 mm) standard gauge switcher steam locomotive (non-operational), operating track-gang cars, the M-3 motorcar (built from scratch by the EBT with an engine and transmission from an automobile), and the M-1, a motorcar (doodlebug) based on scaled-down J. G. Brill and Company plans built by the EBT in 1927. The majority of rolling stock that operated on the railroad in its later coal-hauling years remains on the property in varying condition, including over a dozen flatcars, several boxcars and well over 150 hoppers. Tourist trains use original EBT passenger equipment, as well as converted EBT freight cars. The original railroad maintenance shops have a pair of Babcock & Wilcox boilers, a 19th-century stationary steam engine, and an overhead line shaft system (steel shafts, wood and iron pulleys and leather and canvas belts) that powers antique machine tools, sheet-forming machines, foundry equipment, blacksmith tools and woodworking machines. Most all 33 miles (53 km) of the railroad's original main 30 mile line is still in place, though only 5 miles (8.0 km) are currently used. In recent years disused trackage from Rockhill Furnace southward and Robertsdale southward have been cleared and gauged for use with speeders and handcars (track-gang cars).

Restoration efforts
In the years following the EBT's opening as a tourist hauler, many of the structures along the disused portion of the railroad fell into disrepair and were lost to neglect or arson. Maintenance on the original railroad maintenance shops and other buildings at Rockhill Furnace and on unused equipment was neglected as employees focused the limited manpower on operating the train and maintaining core facilities. As a result, historic fabric outside the core tourist operations was severely threatened.

In 1983, the non-profit Friends of the East Broad Top (FEBT) was organized to preserve and restore the East Broad Top. While initially there was a good working relationship between the EBT and the FEBT, including two and a half years of restoration work at Rockhill Furnace, a series of events in 1985 led to friction and distrust between the two entities. At that time, FEBT re-focused on restoration at Robertsdale where it purchased or leased two historic EBT/RI&C Structures, and on former EBT combine No. 16 it had leased. In the late 1990s the relationship was on the mend with cooperative projects and starting in 2002 FEBT volunteers again began restoration work in Rockhill Furnace. This work continues today and has grown immensely in scope and depth during that time.

Currently, FEBT Rockhill Restoration Crew performs restoration work on the historic railroad at least one weekend per month, except October and December, as well as a special work week in May. FEBT volunteers restore buildings, machinery, repair track and rolling stock, provide tours, and help maintain the premises. Since 2002 substantial restoration has occurred on more than half the core maintenance shop complex. Several other buildings have received moderate to extensive restoration. Five pieces of rolling stock have been returned to operation with three more in progress. Six pieces of machinery in the maintenance shops have been restored to operation and some are being used to make parts for other restoration projects. Seven pieces of track have received work. The crew also works on restoration projects on parts of the railroad outside Rockhill Furnace.

Railroads in the U.S. 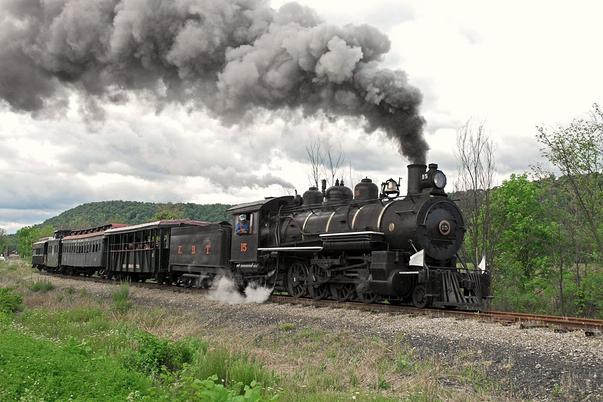 By The original uploader was N2xjk at English Wikipedia - Transferred from en.wikipedia to Commons by Quatro Valvole., CC BY-SA 3.0, https://commons.wikimedia.org/w/index.php?curid=3593736 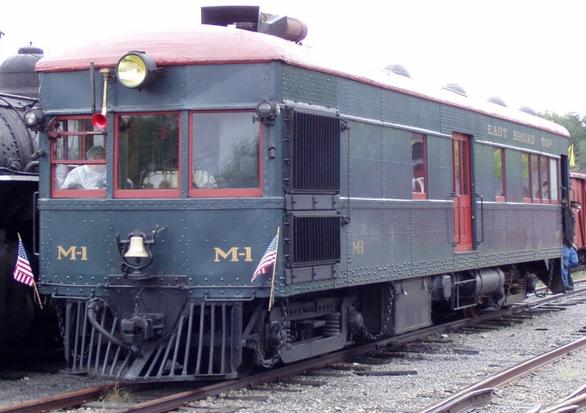