Edaville Railroad train, circa 1966, filled with visitors by the depot building.

The main entrance to the Edaville USA Theme Park and Railroad in 2006. 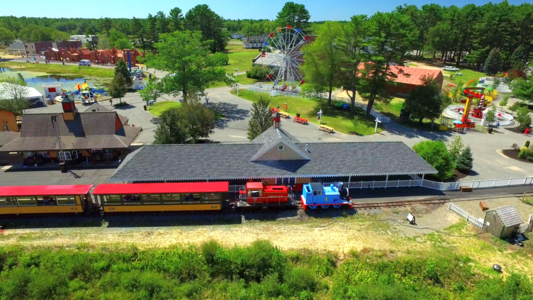 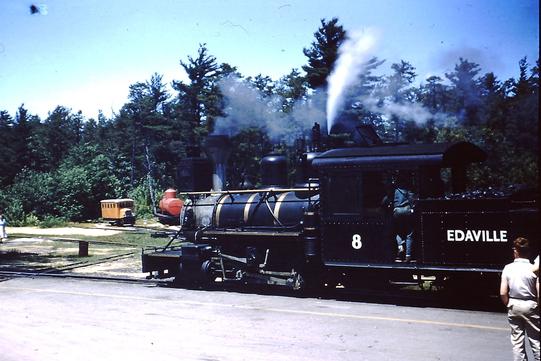 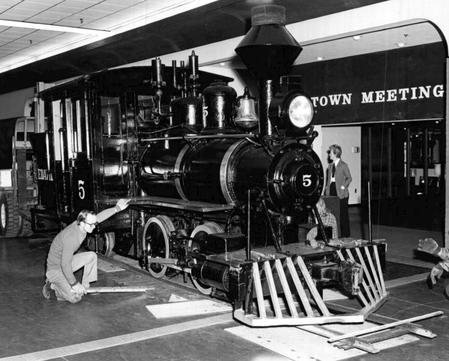 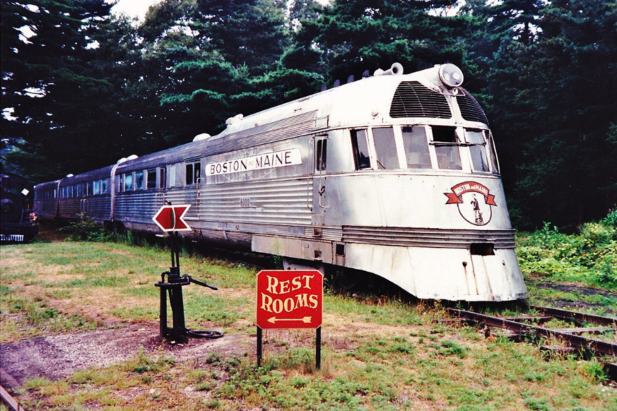 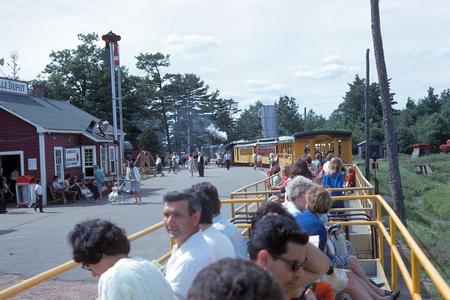 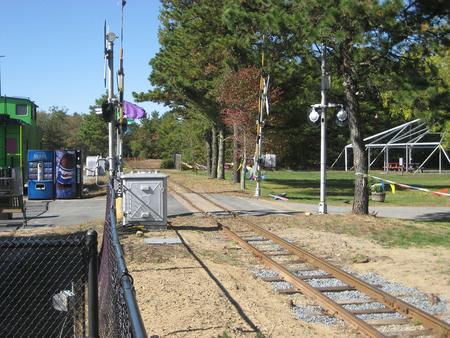 Edaville Railroad Engine Number 5 is placed on temporary display at the Burlington Mall in Massachusetts. April 13, 1973.

Former Bridgton locomotive operating at Edaville in 1959. A former Sandy River railbus and Bridgton tank car can be seen in the background in front of the locomotive.    By rickpilot_2000 from Hooksett, USA - Edaville Railroad, 1959, CC BY 2.0, https://commons.wikimedia.org/w/index.php?curid=22537094

Aerial view of Edaville USA where Thomas the Tank Engine can be seen at the boarding station. August 15, 2015.

Edaville Railroad
Edaville Railroad is a heritage railroad located in South Carver, Massachusetts that opened in 1947. It is generally regarded as one of the oldest heritage railroad operations in the United States. It is a 2 ft (610 mm) narrow gauge line that operates excursion trains for tourists, built by the late Ellis D. Atwood (initials E.D.A, for which Edaville is named) on his sprawling cranberry plantation in Southeastern Massachusetts.

History
Conception and opening
Atwood purchased two locomotives and most of the passenger and freight cars when the Bridgton and Saco River Railroad was dismantled in 1941. After World War II he acquired two former Monson Railroad locomotives and some surviving cars from the defunct Sandy River and Rangeley Lakes Railroad in Maine. This equipment ran on 2 ft (610 mm) narrow gauge tracks (Although it was actually set to the odd dimension of 1ft 11 1/2in), as opposed to the more common 3 ft (914 mm) narrow gauge in the western United States. Atwood purchased the equipment for use on his 1,800-acre (730 ha) cranberry plantation in South Carver. Sand and supplies were hauled in to the bogs, and cranberries were transported to a "screen house" where they were dried and then sent to market. Atwood's neighbors were enchanted with the diminutive railroad. At first, Atwood offered rides for free. When the demand for rides soared, he charged a nickel a ride. Eventually the line became less of a working railroad and more of a tourist attraction.

Atwood died in 1950, the result of injuries he received when the oil burner in the screen house exploded. His widow Elthea and nephew Dave Eldridge carried on operations at Edaville until the railroad was purchased in 1957 by F. Nelson Blount, a railroad enthusiast who had made a fortune in the seafood processing business. The Atwood Estate retained ownership of the land over which the railroad operated, a key point in later years. Blount operated Edaville for the next decade, hauling tourists behind his favorite engine No. 8 and displaying his ever-growing collection of locomotives. Among these was the Boston and Maine Railroad's Flying Yankee. This helped form the basis for his Steamtown, USA collection, first operating at Keene, New Hampshire before moving to Bellows Falls, Vermont. (It would later move and be reconstituted as the Steamtown National Historic Site in Scranton, Pennsylvania.

Blount also leased some of the 2 ft gauge equipment from Edaville to operate at two theme parks in the Northeast: C.V. Wood's short-lived Freedomland U.S.A. in the Bronx, New York, and Pleasure Island in Wakefield, Massachusetts

1967–91
Nelson Blount died in the crash of his light airplane over Labor Day weekend in 1967. Blount's friend and right-hand man Fred Richardson continued on as general manager until the railroad was sold to George E. Bartholomew, a former Edaville employee, in 1970.

Edaville continued operations for another two decades with Bartholomew at the helm. In the 1980s, Bartholomew's attention was divided between the narrow gauge Edaville, and the 4 ft 8 1⁄2 in (1,435 mm) standard gauge Bay Colony Railroad he was then forming, running over disused Conrail branch lines. To some observers and former employees, Edaville began to stagnate around this time, although the annual "Festival of Lights" at Christmas continued to draw huge crowds.

In the late 1980s, after Mrs. Atwood passed and the Atwood Estate evicted Edaville, Bartholomew was forced to cease operations. He eventually put the railroad up for sale in 1991.

The 1990s
Edaville ceased operations in January, 1992 and much of the equipment was sold to a group in Portland, Maine led by businessman Phineas T. Sprague. The equipment was to be the basis of the newly formed Maine Narrow Gauge Railroad Museum along the shores of Casco Bay. The sale generated great rancor. Many of the railroad employees weren't ready to give up on South Carver. Much of the contents of the museum, housed in the former screen house, had been auctioned off the previous fall. But the sale was closed (although the Portland museum took on a debt that would prove all but crushing in subsequent years) and locomotives 3, 4 and 8 were trucked to Portland aboard antique trucks loaned for the occasion. Locomotive No. 7, which was owned by Louis Edmonds, left for Maine at a later date.

Two attempts to revive Edaville during the 1990s floundered. The Edaville Entertainment Group formed an ambitious business plan to revive the park, but their relationship with the Atwood Estate (upon which the tracks were laid) turned sour. The group briefly considered moving the park to a parcel in Freetown, Massachusetts, but eventually they abandoned their effort.

South Carver Rail, led by former Edaville employees (and engineers) Paul Hallet and Rick Knight, operated the hastily refurbished No. 7 for Fred Richardson's 80th birthday at Edaville, and ran trains during the Cranberry Festival over a Columbus Day Weekend in the mid-90's, even managing to borrow Monson No. 3 from Maine. Ultimately their efforts to reopen the park failed, and it was the last time that the "original" Edaville locomotives ran over the line.

In 1999, the new Edaville Railroad opened for operation. Owned and operated by construction company owner Jack Flagg, developer John Delli Priscoli and cranberry grower Douglas Beaton, the railroad acquired a 'new' steam locomotive, No. 21 "Anne Elizabeth", built by the English firm of Hudswell Clarke and a veteran of the Fiji sugar industry. Several of the original Edaville buildings, including the station and the engine house, were demolished with new buildings taking their place. Plans called for the construction of a roundhouse, served by the original turntable, with an enlarged collection of locomotives and rolling stock.

2005-present
By 2005, Edaville Railroad and the land upon which it ran was now owned by a single man: John Delli Priscolli bought up the Atwood property, bought out partner Jack Flagg, and became the sole owner. Although this removed the railroad/landlord conflict that had plagued Edaville for decades, it proved to be the end of the "old" Edaville. Priscolli turned the land near the milepost known as "Mt. Urann" into a housing subdivision, and pulled up the tracks that ran through the new lots. Late 2005 saw the very last run over the "original line" (pulled by oil-burnerNo. 21, which had been cosmetically modified to more closely resemble a Maine prototype). When the rails were removed over Mt. Urann, the mainline became a 2-mile (3.2 km) loop, including about half of the line around the old reservoir.

Edaville USA
Edaville USA, as it was now known, became a theme park with cranberry harvesting and railroading as its two main themes. It was and still is a well-known family attraction throughout New England, now featuring 32 amusement rides including a Ferris Wheel, Tilt-a-Whirl and Scrambler. The classic excursion train experience is still a big draw for this attraction but now Edaville USA boasts "over 90 rides and attractions."

In 2013 Edaville also added a new section of the park known as Dino Land. This section of the park's main feature is a self-guided walking tour where guests can see 24 life sized audio-animatronics Dinosaurs which are included but not limited to an adult and baby Tyrannosaurus, a Brachiosaurus, a Stegosaurus, a Pachycephalosaurus and a Toujiangosaurus. At this time another vintage carnival ride, The Bone Shaker, was added to Edaville in the Dino Land section of the park. There is also a custom built audio-animatronic shooting gallery with an archaeology theme and a 20 foot tall King Kong robot greets guests as they pass through Dino Land's larger than life gate. Dino Land is seasonal as the dinosaurs need to be cared for during sometimes harsh New England winters, with the last day of operation usually being after Halloween. During the month of October, Edaville hosts an event called "Pumpkins Aglow," which mainly features a garden of hundreds of Jack-o'-Lanterns located in a seasonally decorated Dino Land, but also involves trick or treating at Edaville's rides and costume parades. From late November to early January, Edaville USA's Festival of Lights remains a major event in the theme park with Christmas decorations and attractions throughout the park. Children can meet Santa Claus himself inside Ellie's Playhouse, which is a brick building used to house model trains, a small store, tractors, a trolley car complete with TV, a small maze, and more.

In late 2010, the Edaville operators announced that they would not seek to renew their operating lease with Priscolli. Priscolli then put the railroad up for sale for $10 million, and eventually found a potential buyer. However, Priscolli found that the buyer did not intend to continue operating the park, and declined the offer, opting instead to rebuild the park. The restored railroad reopened in September 2011. The following year, the park began a three-year reconstruction project, which includes the installation of additional attractions, refurbishing and repainting existing rides, adding additional parking, and building a new main entrance and guest services area.

A new theme park themed after the British children's television series, Thomas & Friends was built there and opened on August 15, 2015. This expansion added a land themed as the island of Sodor, attempting to showcase Edaville's natural beauty as well as recreate locations from the show including Tidmouth Sheds. Thomas Land also added 11 new Thomas & Friends rides in which guests can ride on many beloved Thomas characters including Harold the Helicopter, Cranky the Crane, Toby, The Troublesome Trucks, etc. This new expansion also added to the park full scale audio-animatronic trains, a stage show and new dining locations. The classic train ride that made Edaville locally famous is now led by a full scale, life sized, talking Thomas the Tank Engine.