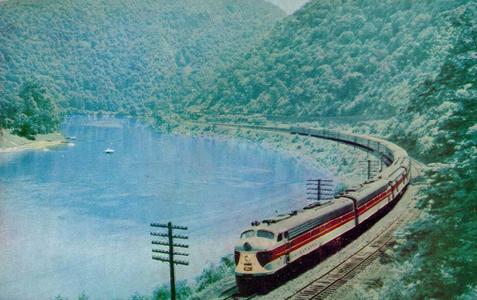 The newly formed railroad would be controlled, at least initially, by former Erie directors. Both of EL's parents entered the merger after a couple of years of deficit operations, and EL continued their record, except for 1965 and 1966.

The northeast railroads, including EL, were i n decline due to subsidized highway and waterway competition, high rates of urban property taxation, commuter operations, and market saturation (i.e., too many railroad lines competing for what market was remaining). The closure in the 1960s of old multi-story factories in the eastern cities, followed by the decline of the domestic automobile and steel industry in the 1970s, eroded much of EL's traditional traffic base. Another problem was the inability to respond to market conditions. At the time, American railroads were overregulated by the ICC, which did not allow railroads to change the rates it charged both shippers and passengers. Reducing costs was the only way to survive and become profitable, but the ICC capriciously restricted what cost-cutting could take place, despite competition from airlines, bus lines and the private automobile.

EL struggled for most of the 16 years it existed. The two railroads that created it were steadily losing passengers, freight traffic and money; and were heavily burdened by years of accumulated debt, confiscatory property taxes, and extensive, money-losing commuter operations. EL had already started to consolidate facilities on the Hudson River waterfront and across southern New York State in 1956, four years before the formal corporate merger. The DL&W route was affected by the decline of anthracite and cement traffic from Pennsylvania by the 1940s. The Erie was burdened by the continuing loss of high-tariff fruit and vegetable traffic from the western states into the New York City region as highways improved in the 1950s. Both railroads were also affected by the opening of the Saint Lawrence Seaway in 1959, which allowed ocean-going cargo ships to travel between European, African and South American ports and cities on the Great Lakes, such as Buffalo, Cleveland, Detroit, Duluth and Chicago. DL&W had previously carried much traffic to and from ocean ships, having its own port facilities at Hoboken Terminal on the Hudson River.

EL quickly consolidated its passenger services, with most trains following the former DL&W route east of Binghamton, New York and the former Erie route west. Long-distance passenger trains were gradually cut back during the 1960s, and the last Hoboken-Chicago train was discontinued on January 6, 1970, leaving EL with a single daily commuter round trip between Cleveland and Youngstown, Ohio and its extensive New Jersey commuter services. In 1967, the state of New Jersey began subsidizing the service and in 1970 began to acquire new cars and locomotives for the trains on the former Erie routes and the non-electrified former DL&W lines (the DL&W electric cars operated until 1984). The Cleveland-Youngstown train lasted until 1977.

In 1960, the Chesapeake & Ohio Railway (C&O) began acquiring Baltimore & Ohio Railroad stock, and in November 1961, the Pennsylvania Railroad and New York Central Railroad announced their intention to merge as the Penn Central. In 1964, Norfolk & Western Railway (N&W) teamed up with Nickel Plate, the Wabash Railroad, the Pittsburgh & West Virginia Railway, and the Akron, Canton & Youngstown Railroad. EL was suddenly surrounded, or thought it would be when all the mergers were approved, and asked to be included in the N&W system. In 1965, N&W and C&O announced their merger plan, which would include EL and several other smaller eastern railroads, to be held by a wholly owned subsidiary holding company named Dereco, Inc. The N&W-C&O merger never took place, but on March 1, 1968, Dereco and EL merged. Stockholders of EL received Dereco shares. Railroad historian George Drury simplified the situation by stating "N&W bought the EL at arm's length."

Hurricane Agnes hit the East on June 22, 1972. After estimating that damage to the railroad, principally between Binghamton and Salamanca, New York, amounted to $2 million ($10,976,929 today), EL filed for bankruptcy on June 26, 1972. During the reorganization of the eastern railroads, it was thought that EL might be able to reorganize on its own, and there was a proposal by Chessie System to buy a portion of the EL. However, operating unions could not reach a compromise, and Chessie canceled the agreement. Also, by 1975, the economy in the eastern United States was affected by the 1973 oil crisis, hurting any hopes of EL being able to independently compete with government-rehabilitated Conrail lines. Not surprisingly, EL asked to be included in Conrail.

Conrail assumed EL operations on April 1, 1976. Conrail's map excluded most of the former Erie main line west of Marion, Ohio. The Erie Western Railway (ERES) was formed in 1977 to operate the 152 miles from Decatur to Hammond, Indiana, with subsidy from the state of Indiana. ERES operated for a brief period in 1978 and 1979, but the subsidy was withdrawn and on-line traffic was not sufficient to support the operation.

An independent Erie Lackawanna Estate continued in existence for several years thereafter. This estate liquidated the EL's marginal non-railroad assets and distributed the railroad purchase funds to satisfy much of the large debt burden that the EL and its predecessors had accumulated. EL's creditors gained more by selling the line's assets than by continuing its traditional business operations. Thus, the EL was a business enterprise that became worth more dead than alive.

Interestingly, parent N&W donated its 1,000 shares of EL stock and the corporate records to the University of Virginia in 1983.

No. 7, Pacific Express, No. 8 the Atlantic Express; discontinued in August 1965.

Nos. 28/29, Cleveland-Youngstown commuter trains; discontinued January 14, 1977. Though operated by Conrail after April 1976, they were the last remnant of EL passenger trains outside the New York-New Jersey commuter zone. These trains used the same EL locomotives and coaches formerly used on through line passenger trains.

EL operated an extensive commuter rail system in the New York Metropolitan Area that was conveyed to Conrail and has been owned and operated by New Jersey Transit and Metro-North Railroad since 1983.