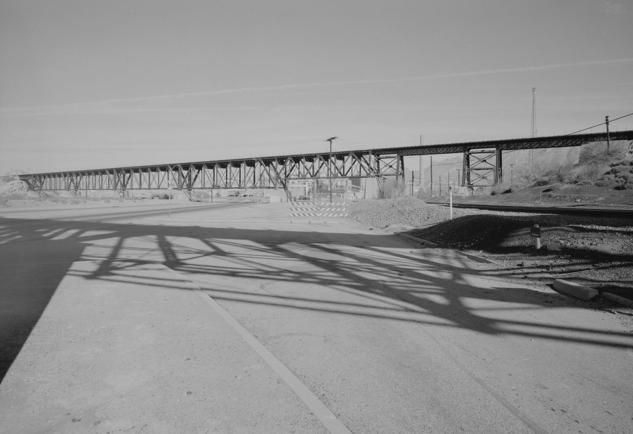 El Paso and Southwestern Railroad bridge over the Rio Grande near El Paso, Texas, circa 1968. 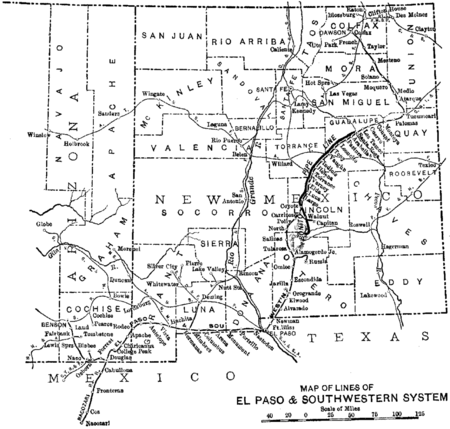 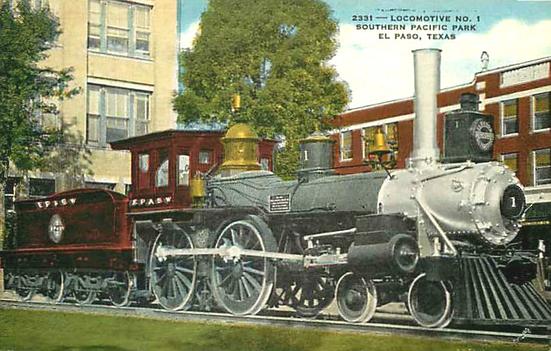 Expansion
Nacozari Railroad
James and Dodge, meanwhile, had acquired the Moctezuma Copper Company in the state of Sonora in Mexico, and in 1902 the El Paso and Southwestern line was extended south from Douglas to the Mexican town of Nacozari de García. The Nacozari Railroad, owned by Moctezuma Copper Co. and used to transport ore to the Moctezuma smelter at Nacozari, was incorporated into the El Paso and Southwestern.

Morenci Southern Railroad
Phelps, Dodge continued to expand, and in time purchased copper mines near Morenci, Arizona. An eventual subsidiary of the El Paso and Southwestern—the Morenci Southern—was incorporated on June 6, 1902, and its roadbed connected the Morenci mines to the Arizona and New Mexico Railway (a subsidiary of the Arizona Copper Co., Ltd) at Guthrie, AZ.

After the deaths of Dodge in 1903 and James in 1907, the various Phelps, Dodge railroads, mining companies, real estate firms, and other subsidiaries and divisions were all merged into Phelps, Dodge and Company.

Railroad Extended To Tucson
Historian David Leighton wrote, that in February 1910, James Douglas, head of the Phelps Dodge Corporation, announced his plan to make Tucson the western terminus of the El Paso & Southwestern Railroad. Up to that point, Benson had that honor. The Board of Directors for the company would later that year approve Douglas' plan, making it official. The extension was from Fairbank, Arizona (now a ghost town about 10 miles west of Tombstone) to Tucson, which had beat out Florence and Phoenix for this honor.

By October 1911, there were forty camps of railroad workers between Fairbank and the Vail train station, with another one in the plans, within six miles of Tucson. In March, 1912, the railroad executives chose a classical design, for its new passenger and freight depots which included a baggage room, ticket office, waiting rooms, operator’s office and a rotunda that was 30 feet in diameter. The roof was to be made of red tile and four Tuscan columns would be by the main entrance. On Oct. 31, 1912, F.L Hunter, manager of the E.P. & S.W. purchasing department, drove in the last spike to complete the rail line, a ceremony witnessed by many Tucsonans. This was followed by the first scheduled train arriving on November 20, 1912, with a crowd of 3,000 people gathered around the temporary depot to greet it and celebrate the official arrival of the El Paso & Southwestern Railroad.

The passenger depot was finished the following year and served travelers until 1924, when the railroad merged with the Southern Pacific Railroad. Two years later, the building was to become the headquarters for the U.S. Border Patrol’s Tucson Sector. More recently it was home to two Mexican restaurants, Carlos Murphy’s and Garcia’s.

Bisbee deportation
The railroad's expansion continued gradually, and by 1917 the El Paso and Southwestern Railroad had more than 1,000 miles (1,600 km) of track in operation. However, the same year saw the railroad involved in a significant labor dispute. During the Bisbee Deportation, railroad officials collaborated with their counterparts in the Phelps, Dodge mining subsidiaries to deport more than 1,300 striking mine workers, their supporters, and even innocent citizen bystanders from the town of Bisbee more than 200 miles (320 km) to the town of Hermanas, New Mexico.

Demise
The worldwide collapse of copper prices after World War I severely affected not only the railroad's financial fortunes but those of the mining companies it served. In 1924, the Southern Pacific leased the entire El Paso and Southwest Railroad from Phelps, Dodge. In 1929, the ICC authorized abandonment of the Deming Branch. In November 1937, the railroad purchased the outstanding interest in the El Paso and Northeastern Railroad. It acquired the El Paso Southern Railway Company in December 1954.

The El Paso and Southwestern Railroad was purchased from Phelps, Dodge and merged into the Southern Pacific in 1955; the Texas subsidiary remained until 1961.

Route and notable buildings
Route
Highways follow most of the route of the El Paso and Southwestern Railroad. Beginning in Tucson, Arizona, Arizona State Route 80 (formerly U.S. Route 80) largely parallels the railroad grade south to Douglas. State Route 80 then follows the old tracks northeast to Rodeo, New Mexico. The tracks diverge from the highway here, and largely follow Gas Line Road until it intersects with New Mexico State Road 9 near Animas, New Mexico. State Road 9 runs next to or on top of the old railroad grade until it reaches El Paso, Texas.

The northern Arizona spur of the railroad may be followed by following U.S. Route 191 north from Douglas to Morenci, Arizona. The Mexican spur may be followed by beginning in Douglas, crossing the international border into Mexico, and following Mexican Federal Highway 14 to Nacozari de García. The northern New Mexican spur parallels or is underneath Interstate 25, and then taking New Mexico State Road 505 (which intersects Interstate 25 at Maxwell, New Mexico) to Colfax, New Mexico. The Dawson Road travels the remainder of the spur from Colfax to the ghost town of Dawson. As of 1906 the El Paso and Southwestern Railroad had a route that connected down from the Dawson Road through Roy, Tucumcari, Santa Rosa, Vaughn, Carrizozo, Alamogordo, Tularosa, down to El Paso and out to Deming and Lordsburg which later became part of the Southern Pacific.

In 2006, the El Paso and Southwestern Freight Depot in El Paso, Texas, built in 1903 and designed by Daniel Burnham, was placed on Preservation Texas's Most Endangered Places list.

With production in the Bisbee expanding, Douglas formed the Arizona and South Eastern Railroad in 1888. The railroad ran on a short spur of track from Bisbee to Fairbank, Arizona, where it met the New Mexico and Arizona Railroad, a subsidiary of the Atchison, Topeka and Santa Fe Railway. Shortly thereafter the line was extended to Benson, Arizona, to connect with the Southern Pacific Railroad. Copper Queen Consolidated built a new smelter at the newly built town of Douglas, Arizona (named for James Douglas), to which the railroad was extended again. The line was renamed the El Paso and Southwestern Railroad on June 25, 1901, to reflect its larger scope (even though it did not yet extend to El Paso, Texas).