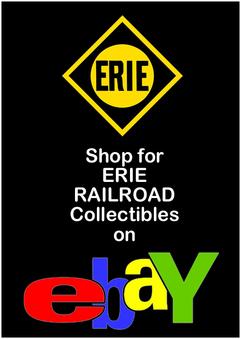 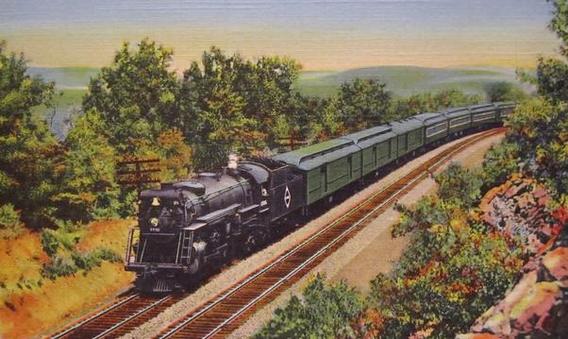 The Erie Railroad
The Erie Railroad (reporting mark ERIE) was a Class I railroad that operated 2,245 miles of road in the states of Illinois, Indiana, New Jersey, New York, Ohio, and Pennsylvania. Its 998 mainline route extended from Jersey City to Chicago, and played an important role in the development and economic growth of cities along the Southern Tier.

The Erie Railroad merged with their former rival the Delaware, Lackawanna & Western Railroad, to create the Erie Lackawanna Railroad. The Erie Lackawanna then became a part of the Conrail system in 1976. In 1983, Erie remnants became part of New Jersey Transit rail operations, including its Main Line. Today, most of the former Erie Railroad routes are operated by Norfolk Southern Railway.

When the Erie Canal was built across upstate New York between Albany and Buffalo, DeWitt Clinton, governor of New York, promised the people of the Southern Tier of the state some kind of avenue of commerce by way of appeasement. William C. Redfield proposed a direct route from the mouth of the Hudson River to the Great Lakes, but it was Eleazar Lord who was instrumental in the chartering of the New York & Erie Railroad (NY&E) by the New York state legislature on April 24, 1832. Among the conditions of the charter were that the railroad lie wholly within New York and that it not connect with any railroads in New Jersey or Pennsylvania without permission of the legislature. A track gauge of 6 ft  ensured that even if it did connect, its cars and locomotives would not stray onto foreign rails. The terminals were fixed: the town of Dunkirk offered land for a terminal on Lake Erie, and Lord lived at Piedmont, on the Hudson just north of the New Jersey state line. The New York & Harlem Railroad was willing to extend a line north to a point opposite Piermont, which would have given the NY&E an entrance to Manhattan, but the new railroad refused the offer.

The surveyed route included two detours into Pennsylvania, one because the Delaware and Hudson Canal had already occupied the New York side of the Delaware River above Port Jervis, and the other to follow the Susquehanna River to maintain an easy grade west of Deposit, New York.

Ground was broken on November 7, 1835, near Deposit, New York. Shortly afterwards fire destroyed much of New York and wiped out the fortunes of many of the railroad's supporters; then a business panic struck the nation. Construction got under way in 1838, and the first train operated in 1841. Much of the railroad was built on low trestlework rather than directly on the ground; the resulting construction and maintenance costs drove the railroad into bankruptcy soon after it opened. Construction continued, however. The line that had been built east a few miles from Dunkirk was taken up to provide rails for the extension from Goshen, New York to Middletown. Standard-gauging the line was proposed while it would still be relatively inexpensive to do so, but the railroad chose to stay with its broad gauge. The NY&E reached Port Jervis, New York on the Delaware River, a 74-mile  distance from Piermont, on December 31, 1847; just a year later it was into Binghamton. The whole railroad from Piermont to Dunkirk was opened in May 1851 with an inspection trip for dignitaries from U.S. President Millard Fillmore to Secretary of State Daniel Webster on down and the customary eating, drinking, and speechifying.

The NY&E grew a few branches: at the east end to Newburgh, New York on the Hudson, and at the west end to Rochester and to Buffalo. The latter soon replaced Dunkirk as the principal western terminal of the railroad.

In 1833, the Paterson & Hudson River Railroad was chartered to build between Paterson, New Jersey and Jersey City, and the Paterson & Ramapo Railroad north to the New York state line at Suffern. The two lines provided a shortcut between New York City and the NY&E at Suffern, even though they did not connect directly — passengers walked the mile between the two. The NY&E fought the situation until 1852, when it leased the two railroads, built a connecting track, and made that the main route, supplanting the original line to Piermont.

The NY&E came upon hard times in the 1850s. Cornelius Vanderbilt (the Commodore), and Daniel Drew both lent the railroad money, and in 1859 it entered receivership and was reorganized as the Erie Railway. Drew and two associates, James Fisk and Jay Gould, engaged in some machinations, with the result that in the summer of 1868 Drew, Fisk, and Vanderbilt were out and Gould was in as president of the Erie.

In 1874, the Erie leased the Atlantic & Great Western Railroad (A&GW), which had been opened 10 years earlier between Salamanca, New York on the Erie, and Dayton, Ohio. The A&GW entered Cincinnati over the Cincinnati, Hamilton & Dayton Railway (CH&D), which laid a third rail to accommodate A&GW's broad gauge equipment. At Cincinnati the A&GW connected with the broad gauge Ohio & Mississippi Railway to St. Louis. (The two connecting railroads later became part of the Baltimore & Ohio Railroad.) The lease to the Erie did not last long. A&GW entered receivership and was reorganized as the New York, Pennsylvania & Ohio Railroad (a.k.a. "Nypano"). To obtain access to Cleveland and Youngstown, the Nypano leased the Cleveland & Mahoning Valley Railroad (C&MV) in 1880. The Erie leased the Nypano in 1883, acquired all its capital stock in 1896, and acquired its properties in 1941.

Hugh J. Jewett became president of the Erie in 1874. His first task was to lead the railroad through reorganization; it became the New York, Lake Erie & Western Railroad. On June 22, 1880, the entire system was converted to standard gauge. That same year the Chicago & Atlantic Railway was completed between Hammond, Indiana, and Marion, Ohio, where it connected with the A&GW. Access to Chicago was over the rails of the Erie from Jersey City to Buffalo. The railroad was bankrupt again by 1893 and reorganized in 1895 as the Erie Railroad.

The "Erie Limited" speeding through the mountains near Port Jervis, New York.

In 1899, Frederick Douglas Underwood began a 25-year term as president of the Erie. He had been associated with James J. Hill, and he was a friend of E. H. Harriman. Both Hill and Harriman had considered the Erie as a possible eastern extension of their respective systems. Neither man did much toward acquiring it, although Harriman became a member of Erie's board of directors and arranged financing for it. In 1905 the Erie briefly acquired the CH&D and the affiliated Pere Marquette Railway (PM) from J. P. Morgan, Erie's banker. Investigation revealed that CH&D's financial condition was not as advertised, so Underwood asked Morgan to take the two railroads back — which he did.

Two days later the CH&D and the PM entered receivership. Underwood is remembered for rebuilding the Erie. His projects included double-tracking the remainder of the main line and building several freight bypasses with lower grades, making the line east of Meadville, Pennsylvania largely a water-level route. In 1907, the Erie electrified passenger operations on its branch between Rochester and Mt. Morris, New York. Electric operation lasted until 1934.

During the eastern railroad strike of 1913, Underwood agreed to accept any ruling made by mediators under the Newlands Reclamation Act. One of the demands made by Erie employees was a 20 percent increase in wages. Erie management had refused a wage increase but compromised by asking employees to wait until January 1915 for any advance. Union leaders agreed to make this an issue which Erie management would settle with its own men. However, W. G. Lee, president of the brotherhood of railroad trainmen, asserted that the only way "to deal with the Erie is through J.P. Morgan & Company, or the banks". Underwood responded from his home in Wauwatosa, Wisconsin, saying "I am running the Erie Railroad: not George W. Perkins, nor J. P. Morgan & Co., nor anybody else."

In the 1920s the Van Sweringen brothers began buying Erie stock, seeing the road as a logical eastern extension of their Nickel Plate Road. By the time they were done, they owned more than 55 percent of Erie's stock along with their interests in the Chesapeake & Ohio Railway, PM and Hocking Valley Railway.

Compared to its rivals in the New York-Chicago business, the Erie was basically a freight railroad and one concerned more with through traffic than with local trade. The Erie family included several short lines. The Erie began to buy New York, Susquehanna & Western Railway (NYS&W) stock in 1898 and leased the line that same year. The NYS&W entered bankruptcy in 1937 and resumed life on its own in 1940. The Bath & Hammondsport Railroad was controlled by the Erie from 1903 to 1936, when it was sold to local businessmen. Much of the Erie's commuter business out of Jersey City was over subsidiary lines that Erie operated as part of its own system: the New York & Greenwood Lake, the Northern Railroad of New Jersey, and the New Jersey & New York Railroad.

In 1938, the Erie was involved in the U.S. Supreme Court case of Erie R.R. v. Tompkins. The Erie doctrine, which governs the application of state law in federal diversity cases, is still taught in American law schools today.

The Erie held its own against the Great Depression until January 18, 1938 when it entered bankruptcy. Its reorganization, accomplished in December 1941, included purchase of the leased C&MV, swapping high rent for lower interest payments, and purchase of subsidiaries and leased lines. To the surprise of many, Erie began paying dividends. Prosperity continued until the mid-1950s, but then began to decline. Erie's 1957 income was less than half of that for 1956; in 1958 and 1959 the railroad posted deficits.

The business recession that occurred in the 1950s led the Erie to explore the idea of doing business with the nearby Delaware, Lackawanna & Western Railroad (DL&W). The first result of this was the abandonment of duplicate freight facilities in Binghamton and Elmira, New York. Between 1956 and 1957, the Erie shifted its passenger trains from its former Jersey City terminal to the DL&W's newer one in Hoboken. Also, the DL&W's main line between Binghamton and Elmira was abandoned in favor of the Erie's parallel main line in 1958. These successful business consolidations led to merger talks (which, at first, also included the Delaware & Hudson Railroad); on October 17, 1960, the two railroads merged to create the Erie Lackawanna Railroad (EL).

The Erie Railroad operated a number of named passenger trains, although none were as well known or successful as others like the Pennsylvania Railroad's Broadway Limited or New York Central Railroad's 20th Century Limited. Some of the Erie's most well known trains included the Erie Limited, Lake Cities, Pacific Express, Atlantic Express, Midlander, Southern Tier Express and Mountain Express.

As part of the 30th anniversary of Norfolk Southern Railway being formed, NS decided to paint 20 new locomotives into the paint scheme of predecessor railroads. NS #1068, an EMD SD70ACe, was painted into Erie Railroad's color scheme. It was released on May 25, 2012.