Fort Worth and Denver Railway's Texas Zephyr, train No. 2, northbound, headed by diesel locomotive No. 9990, at Fort Worth, Texas, circa 1950.

The main line of the railroad ran from Fort Worth through Wichita Falls, Childress, Amarillo, and Dalhart, to Texline, where it connected with the rails of parent company Colorado and Southern Railway, both of which became subsidiaries of the Burlington Route in 1908.

Construction
The Panic of 1873 delayed the start of construction until 1881 when Grenville M. Dodge became interested in the project. As chief engineer for the Union Pacific Railroad Dodge had played a large part in the construction of the First Transcontinental Railroad. Dodge organized the Texas and Colorado Railway Improvement Company in 1881 to build and equip the FW&DC in return for $20,000 in stock and $20,000 in bonds for each mile of track laid. In the same year The FW&DC and the Denver and New Orleans Railroad Company, organized in Colorado, agreed to connect their systems at the Texas-New Mexico border. The FW&DC received no state subsidy other than the right-of-way easements to cross state-owned lands totaling 2,162 acres.

Beginning construction at Hodge Junction, just north of Fort Worth, on November 27, 1881, by September 1882 Dodge had completed 110 miles of track to Wichita Falls, Texas. By 1885 the line reached Harrold; by 1886, Chillicothe; by 1887 Clarendon and Amarillo; and by 1888 Texline on the New Mexico border. Continuing into the New Mexico Territory the FW&DC finally linked with the D&NO where the railroads met at Union Park, near present-day Folsom, New Mexico, 528 miles from Fort Worth, on March 14, 1888.

Service between Fort Worth and Denver began on April 1, 1888. In 1895 Dodge became president of the company, one of several railroads he held a financial interest in. 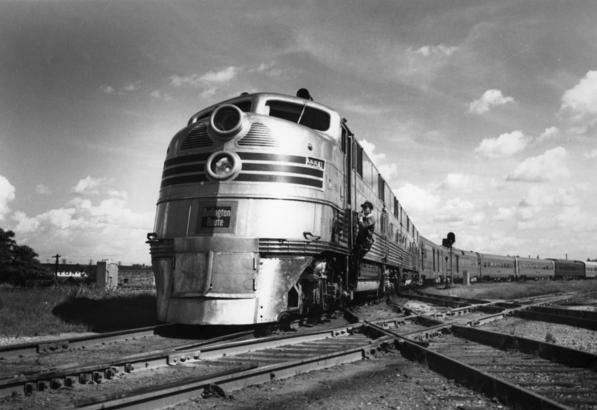 A Fort Worth and Denver Slideshow.

Expansion
In 1899 The FW&DC was acquired by the Colorado and Southern Railway, successor to the D&NO. The C&S itself was bought by the Chicago, Burlington and Quincy Railroad in 1908, but the three companies continued to operate as separate legal entities. In part this separation was due to Texas law, which required all railroads operating in the state to have their headquarters in Texas. This had the effect of requiring all operating railroads in Texas to be wholly owned, but independent companies of the regional or national roads.

The FW&DC was the first rail line to penetrate the northwest part of Texas, which contributed greatly to the growth of Texas cities such as Wichita Falls, Childress, Amarillo and Dalhart. In addition, the railroad actively promoted settlement of the rural areas it served, providing free seeds, trees, and tree seedlings to farmers and ranchers to promote cotton and wheat growing as well as erosion prevention.

In the first four decades of the twentieth century, the FW&DC built or acquired a number of feeder lines in its territory, so that by 1940, the Burlington-owned system operated 1,031 miles of main track in Texas in addition to the Burlington-Rock Island Railroad.

In 1925, the FW&DC had extended service from Fort Worth to Dallas by acquiring trackage rights over the Rock Island Railroad between those cities. At Dallas, FW&DC trains connected with the Burlington-Rock Island Railroad for through service to Houston.

Peak and decline
The premier passenger train of the FW&DC was the streamlined Texas Zephyr (Trains #1 and 2), which operated between Dallas and Denver from August 22, 1940 to September 11, 1967. Other passenger trains included the Gulf Coast Special (Train #7), the Colorado Special (Train #8), the Sam Houston Zephyr (Trains #3 and 4), as well as motorcars over the South Plains line between Childress and Lubbock and over the Wichita Valley between Wichita Falls and Abilene. At the railroad's peak in 1944, during the World War II economic boom, the Texas Railroad Commission reported that the FW&DC earned $12,132,515 in freight revenue, $5,839,399 in passenger revenue, and $1,488,095 in other revenue. However, by 1972, in the face of competition from interstate highway traffic and airlines, the Fort Worth and Denver owned twenty locomotives and 1,520 freight cars, but operated at a loss of $1,743,551.

The FW&D's former main line through the Texas Panhandle and North Texas is now a heavily used route of BN's successor, the BNSF Railway, primarily for coal and intermodal trains between Fort Worth and the western United States. Additionally, the Union Pacific Railroad has trackage rights on this line from Fort Worth to Dalhart. However, no passenger trains have operated in scheduled revenue service on this route since the FW&D ended all passenger service in 1967, before the creation of Amtrak in 1971.

The Saints' Roost Museum in Clarendon houses a restored Fort Worth and Denver Railway depot.