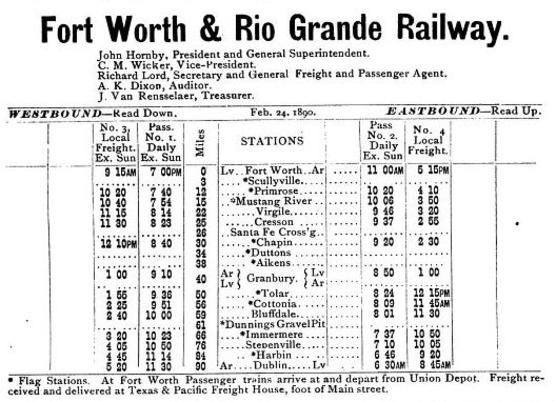 Map of the Frisco system about 1901-1903, showing planned extensions of the newly acquired FW&RG from Brownwood to Spofford and San Antonio. 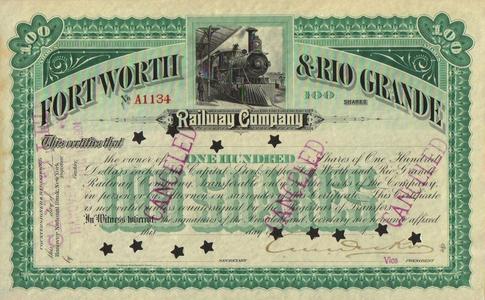 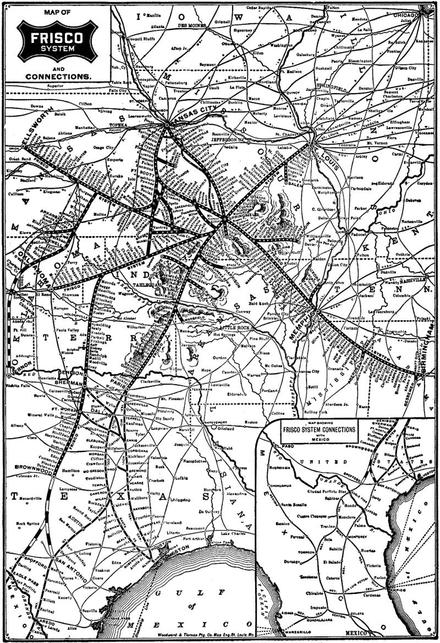 With financial backing from the Vanderbilt railroad syndicate, construction of the FW&RG began at Fort Worth in November, 1886, but proceeded slowly with many changes of route, reaching Granbury (only 40 miles away) a year later, Comanche in 1890, and Brownwood, 144 miles from Fort Worth, in 1891.

In 1901, the Frisco Railroad got control of the FW&RG, which it operated as an independent subsidiary, extending the line to Brady in 1903 and on to Menard in 1911. The Frisco entered bankruptcy in 1913 and made no further extensions of the FW&RG, which in most years failed to make a net profit.

The GC&SF was merged into corporate parent Atchison, Topeka and Santa Fe Railway on August 1, 1965. The Brownwood-Brady segment (44 miles) had been abandoned in 1959, and the Brady-Menard segment (31 miles) was abandoned in 1972. The remainder of the former FW&RG from Belt Junction in Fort Worth to Ricker, six miles east of Brownwood, was bought by Cen-Tex Rail Link, an affiliate of the South Orient Railroad on May 20, 1994. South Orient sold the Cen-Tex line to the Fort Worth and Western Railroad in 1999.

A Fort Worth and Rio Grande stock certificate.

Timetable of the Fort Worth and Rio Grande Railway in 1890, when it terminated at Dublin.