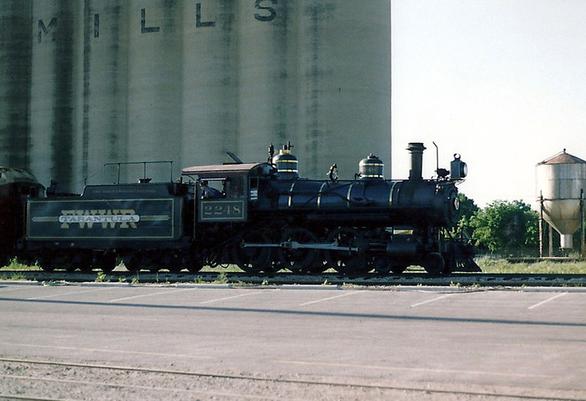 The Tarantula of the Fort Worth and Western Railroad.

The FWWR began operations in 1988, with 6.25 miles (10.06 km) of track that it had bought from the Burlington Northern. By the mid-1990s, the railroad operated 10.75 miles (17.30 km) of track, the result of numerous minor acquisitions. In 1996, the FWWR more than doubled its total trackage with the lease of a 28.5 miles (45.9 km) route from Dallas Area Rapid Transit, and in 1998 purchased 134 miles (216 km) of track from South Orient Railroad, now Texas Pacifico Transportation. The FWWR leased two Union Pacific Railroad properties, a yard and branch line, in 2002 and 2003 respectively.

Route
The FWWR operates a total of 276 miles (444 km) of track between Carro and Ricker, Texas, with branch lines from Dublin to Gorman and from Cresson to Cleburne, as well as trackage rights in the Fort Worth area and between Ricker and San Angelo Junction, Texas. Since 2007, the railroad has been in the process of resurfacing its trackage, as well as installing new sidings and upgrading the route, eventually to allow 40 mph (64 km/h) speeds over the entire line.

Company
On 27 December 2010, Fort Worth and Western named Thomas Schlosser as president and CEO, who took over from Steven George, who had held the position since 2000; the company's vice president and COO is Richard Green. The company employs around 85 people.

​Fleet
As of December 2009, the Fort Worth and Western's locomotive fleet consists of the following:

Fort Worth and Rio Grande Railway