History
The first railroad constructed out of Chicago, the Galena and Chicago Union, was chartered January 16, 1836, to connect Chicago with the lead mines at Galena. "The Pioneer," the first locomotive on the road, arrived at Chicago on October 10, 1848, nearly thirteen years after the charter was granted. In 1850, the Galena and Chicago Union Railroad was completed as far as Elgin. The railroad and the canal were vital in the development of Chicago and the population of the city tripled in the six years after the opening of the canal. Eventually other railroads were built and Chicago became the largest railroad center in the world.
Cedar Rapids and Missouri River Railroad

In 1862 the G&CU leased in perpetuity the Cedar Rapids and Missouri Railroad which was to be the first railroad to reach Council Bluffs, Iowa and the First Transcontinental Railroad.

The Cedar Rapids and Missouri Railroad was a railroad chartered to run from Cedar Rapids, Iowa to Council Bluffs, Iowa on the Missouri River. It was the first railroad to reach Council Bluffs, Iowa, the eastern terminus of the First Transcontinental Railroad. The city of Ames, Iowa was created as a station stop on the line. It was one of four railroads that were built as result of the Iowa Land Bill of 1856 that gave land grants for railroads.

The railroad was organized on January 16, 1860, and composed largely of stockholders in the Chicago, Iowa and Nebraska Railroad Company, already in operation from Clinton to Cedar Rapids.

Union Pacific Railroad baron Thomas Clark Durant was to manipulate CR&M stock to add to his fortune. Durant controlled another of the Iowa land grant railroads, the Mississippi and Missouri Railroad (M&M) and ran up its stock by saying the transcontinental railroad would connect to it. At the same time, he was buying the depressed CR&M stock. Then Durant declared that CR&M would be the railroad of choice for the transcontinental connection. After buying back the newly depressed M&M stock, Durant and his cohorts made about $5 million.

The city of Ames was chartered in 1864 for the railroad and was named by CR&M President John Blair for Massachusetts Congressman Oakes Ames.

In July 1862, the Galena and Chicago Union Railroad leased the line in perpetuity. The Galena line was in turn consolidated with the Chicago and North Western Railway on June 2, 1864, and the line to Council Bluffs was completed in January 1867. The lease was formally turned into a sale in 1884.

The Chicago and North Western Railway merged with the Union Pacific Railroad over a century later in 1996.

Today, the G&CU's main line between Chicago and West Chicago is a busy commuter service, jointly operated by Union Pacific and Metra as the Union Pacific / West Line.

Construction
The railroad was constructed starting in March 1848, and was completed in 1853. The first westbound train out of Chicago departed on October 25, 1848, pulled by a used Baldwin-built locomotive named Pioneer. 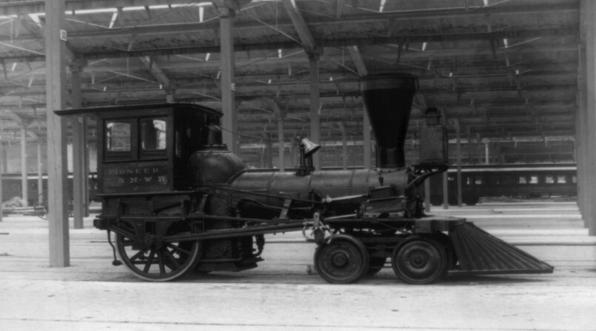 The "Pioneer" was the first locomotive to run out of Chicago. 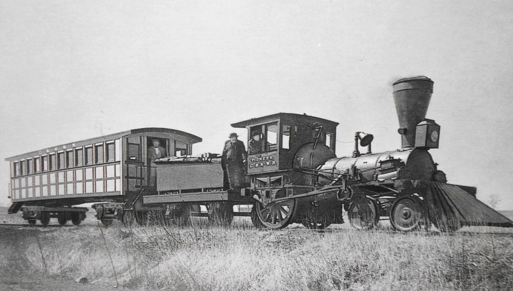 Original plan from Chicago to Galena. 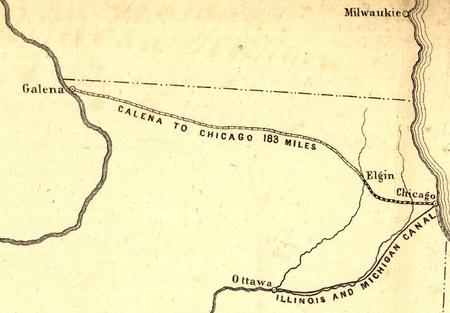