A Georgia and Florida Slideshow.

Much of the Millen to Pendleton branch line was abandoned in 1930, however, the section from Garfield to Summit-Graymont was to remain open. In 1934, the former Augusta Southern line between Sandersville and Keysville was abandoned. In 1950 the railroad had been in receivership since 1929 (longer than any other Class I at the time), and 50 more miles of road was abandoned in an effort to trim all but essential trackage. This abandonment included the subsidiary Statesboro Northern, along with all passenger service except for one mixed train. It was hoped at the time that salvage of the abandoned trackage would help pay for diesel locomotives which were very much needed to replace obsolete steam power. At the end of 1950, the G&F owned 24 steam locomotives, 9 diesel locomotives, 339 freight cars, 6 passenger cars, and 50 pieces of company service equipment. The Valdosta-Madison line was sold to new owners in 1954, who renamed it the Valdosta Southern Railroad. The last remaining section of the Broxton branch was abandoned by 1958. By the end of 1960, the G&F operated 321 miles of road on 395 miles of track; that year it reported 569 million ton-miles of revenue freight and no passengers.

Southern Railway
The Southern Railway acquired the Georgia & Florida in 1963 and by 1966 had abandoned the section of line between Hephzibah and Midville, except for a short portion of the line near Gough. The Southern also abandoned the Nashville-Sparks section of the Moultrie branch in 1967 and 1968. In 1971, Southern merged what was left of the G&F into subsidiary Central of Georgia.

Railga.com  - Georgia's Railroad History and Heritage with over 16 years on the web.

History
The Early Years: 1906 - 1915
Organized in 1906, the Georgia and Florida Railway bought, constructed and operated railroads in the connecting Southern states of Georgia and Florida. John Skelton Williams, a former president of the Seaboard Air Line Railway, began building the G&F when he acquired six existing rail lines between 1906 and 1911. These lines included: The Atlantic and Gulf Short Line Railroad, which ran 20 miles from Midville to Swainsboro; The Augusta and Florida Railway, which ran 30 miles from Keysville to Midville; The Douglas, Augusta and Gulf Railway, which ran 87 miles between Hazlehurst-Nashville and Barrows Bluff-Broxton; The Millen & Southwestern Railroad, which ran 53 miles from Millen through Pendleton to Vidalia; The Nashville and Sparks Railroad, running 12 miles between Nashville and Sparks; and the Valdosta Southern Railway, running 28 miles from Valdosta, Georgia to Madison, Florida. Trackage rights between Keysville and Augusta via the Augusta Southern Railroad were also obtained in 1906.

A north-south line from Augusta, Georgia to Madison, Florida was realized in 1910 by building three new lines from Swainsboro to Pendleton, from Hazlehurst to Vidalia, and from Nashville to Valdosta, all three connecting with the recently acquired lines. A shortcut was constructed in Coffee County from Douglas to Garrant, abandoning the older tracks between Broxton and Garrant. Broxton was now off the main line, but a branch line remained that connected Broxton to the new main line at Douglas. When the Sparks Western Railway was purchased, the G&F established a branch to Moultrie in 1911 through trackage rights agreements and the construction of short connectors. A 2.2-mile branch from Sparks to Adel also established a branch to Moultrie. In 1915 the G&F entered receivership, but was able to remain intact.

A New Beginning: 1916-1929
By 1916 the G&F owned 318 miles of road that consisted of a 224-mile main line from Keysville, Georgia, to Madison, Florida along with a 44-mile branch from Pendleton to Millen; a 17-mile branch from Douglas Junction to Barrows Bluff; a 32-mile branch from Nashville to Kingwood; and a 2.2-mile line between Sparks and Adel, as well as trackage rights of 2.2 miles from Kingwood to Moultrie on the AB&A and another 26 miles from Keysville to Augusta on the Augusta Southern. The G&F acquired the Augusta Southern (Augusta-Sandersville) in 1919. In 1924, the railroad added a branch line to Statesboro by leasing the Midland Railway where it connected with the main line at Stevens Crossing. In 1926, the G&F reorganized and was renamed the Georgia and Florida Railroad.  Beginning in 1927 the G&F constructed an extension from Augusta to Greenwood, South Carolina, enabling a connection to the Seaboard Air Line and the Piedmont & Northern to be obtained by 1929. The year of 1929 also saw the Georgia and Florida again enter into receivership. 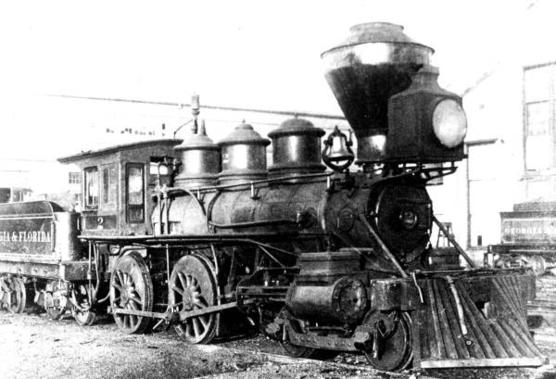 Georgia and Florida Railroad engine number 2, a 4-4-0 built by Baldwin Locomotive Works in 1873.