The Three Rivers Rambler is a unique tourist train operation that uses both steam and diesel equipment to take passengers on a memorable 11-mile journey in Knoxville, TN. With a new depot, the 3RR offers one of the most modern tourist train operations while keeping true to the historic equipment that makes our operation special. Check out the links below to learn more about the 3RR.

G&O is an affiliate of Knoxville Locomotive Works, a green locomotive manufacturer. KLW was created in 1998 as a locomotive repair and services shop for G&O. This operation now focuses on building single-engine green locomotives. 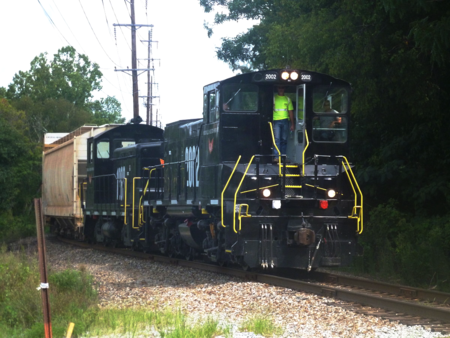 The company owns railroads carrying a wide variety of commodities, generating around 40,000 annual carloads over approximately 203 miles of track.

History
Gulf & Ohio Railways was founded by Pete Claussen concurrent with the start up of the first G&O shortline, the Mississippi Delta Railroad in 1985. The Alabama & Florida and Wiregrass Central soon followed as the next additions to the Gulf & Ohio network, beginning operations in 1986 and 1987 respectively.

Expansion
The company continued modest expansion throughout the 1990s, acquiring new railroads in Alabama, Georgia, Florida, North Carolina, Tennessee, and Kentucky. These new additions included the Atlantic & Gulf in 1991, the H&S in 1992, the Nash County Railroad in 1994, and the Georgia & Florida in 1995. Also in 1994, Gulf & Ohio would further expand its presence in North Carolina by acquiring both the Yadkin Valley Railroad and Laurinburg & Southern.[3] Growth continued with the acquisition in 1996 of the Lexington & Ohio in Kentucky and expansion into Tennessee with the Knoxville & Holston River Railroad in 1998.

The 1990s also saw the sale and transfer of some G&O lines to other operators, including the Alabama & Florida railroad on November 23, 1992 to Pioneer Railcorp, and on April 30, 1999, Gulf & Ohio sold two of its railroads to North American RailNet, which combined both — the Atlantic & Gulf and the Georgia & Florida — into a single entity, Georgia & Florida Railnet. This sale effectively ended the G&O presence in Florida, as well as ending their presence in Georgia until 2003.

Continuing Changes
In June 2001 Gulf & Ohio terminated operations on the Mississippi Delta railroad as the line was turned over to local interests - ending the G&O presence in Mississippi. During the same period, the Three Notch Railroad began operations over part of the Alabama & Florida regained by Gulf & Ohio after being sold in 1992. Also in 2001, the Southern Alabama Railroad was acquired and renamed the Conecuh Valley Railroad.

2003 brought additional changes to Gulf & Ohio, including the creation of the Chattahoochee & Gulf Railroad from former Norfolk Southern tracks in March concurrent with the sale of the Lexington & Ohio to R.J. Corman Railroad Company. In 2005, Gulf & Ohio began operating the Morehead & South Fork at the port of Morehead City, North Carolina.

Recent History
In 2006 Gulf & Ohio sold the H&S and the Chattahoochee & Gulf railroads to shortline operator Genesee & Wyoming Inc.. Both divisions were subsequently consolidated into a single operation, the Chattahoochee Bay Railroad. On February 1, 2010 the lease on the Morehead & South Fork was acquired by the Carolina Coastal Railway and was no longer operated by Gulf & Ohio.

Knoxville became the center of Gulf & Ohio operations, with a locomotive shop, corporate headquarters, and special tourist excursions all based in the city. The company's corporate headquarters are located in the restored James Park House in the city's downtown area. The company continued to acquire and sell subsidiary railroads, with its presence eventually contained to three states; Alabama, North Carolina, and Tennessee.

Gulf & Ohio extended its presence into South Carolina in November 2010 with the acquisition of the Lancaster and Chester Railway, an independent railroad. In April 2011, RailAmerica announced its plans to purchase three Gulf & Ohio subsidiaries in Alabama for $12.7 million. If successful, it would end the Gulf & Ohio presence in the state. That sale was completed in 2011, and the Nash County Railroad was sold to the CLNA in 2011 as well, and continues operations under the CLNA mark.

Livery
Initially each subsidiary railroad had its own stylized herald for the cab section and short hood. However the early railroads shared a bright red paint scheme and distinctive large white unit numbers applied near the end of the long hood. Further development of the paint scheme brought about a common logo in the form of a simple black circular herald with a yellow border. The new logo was placed below the cab windows and featured a stylized version of the railroad name and initials within.

Concurrent with the 1995 acquisition of the Georgia & Florida railroad, the company changed its color scheme from bright red with road specific stylized logos to a flat black color featuring the corporate logo. The iconic large white numbers on the long hood remained, although they were now placed closer to the center as opposed to the end. With the influx of flat black GP10 locomotives from the Illinois Central and GP38s from Norfolk Southern, it became uneconomical to repaint all of the new additions red. Furthermore, due to the frequent transfer of locomotives between different subsidiaries the corporate logo appeared with the railroad name in plain text featured either above or below the logo to simplify the process of re-lettering locomotives as they moved to a different property.

Knoxville and Holston River Railroad MP15AC No. 2002 leads a train through Tyson Park near downtown Knoxville.